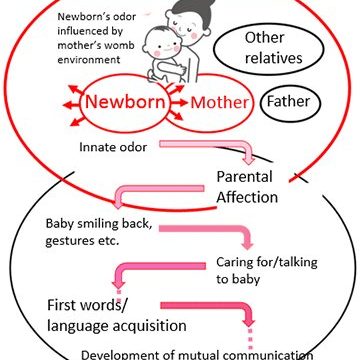 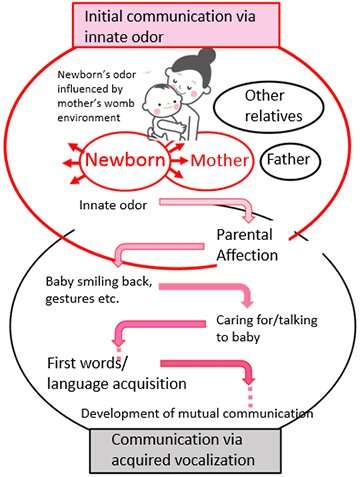 A team led by Kobe University Professor Mamiko Ozaki (Department of Biology, Graduate School of Science) has become the first to identify the chemical makeup of the odors produced by newborn babies’ heads. The results shed more light on the olfactory importance of newborns’ heads in mother-baby and kin recognition. They also developed a non-invasive and stress-free method of sampling these odors directory from heads of the babies.

The research team consisted of professors and researchers from Hamamatsu University of Medicine, Iwate University, Tsukuba University and Kobe University. The study looked at both the chemical and psychological aspects of the odors of babies’ heads and how this provides an important way for newborns to attract the attention of caregivers. Research into these odors can hopefully be utilized in the prevention of issues such as infant neglect and attachment disorders.

The scientific paper for this study was first published in English in the online journal Scientific Reports.

The role of olfactory information in forming connections between humans is not well understood. Although there have been studies into the importance of olfactory cues in the formation and development of mother-infant relationships, there have been very few investigations to analyze and identify the essential chemical components of such cues.

The main aim of this study was to understand more about the odor produced by newborn babies, which may facilitate caregiving. The following research was carried out: 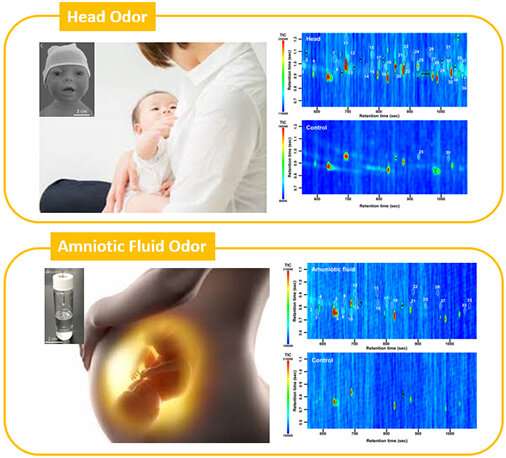 Head odor samples were obtained from 5 babies born at Hamamatsu University Hospital. A stress-free method using monosilica beads was used to trap the odors. The beads were wrapped inside a cap-shaped net bandage and then placed on the babies’ heads. The babies were with their mothers for the duration of the 20 minute sampling period and showed no signs of distress. Two samples of the mothers’ amniotic fluid odor were also taken by suspending monosilica beads in the headspace of the glass bottle containing the fluid.

2. Chemical similarities and variations in the odors

Aldehydes, carbonic oxides and hydrocarbons were among the 37 volatile odor components identified in the babies’ head and amniotic fluid samples. The composition contents of these odors were calculated and the patterns for all the samples were compared (Figure 3). 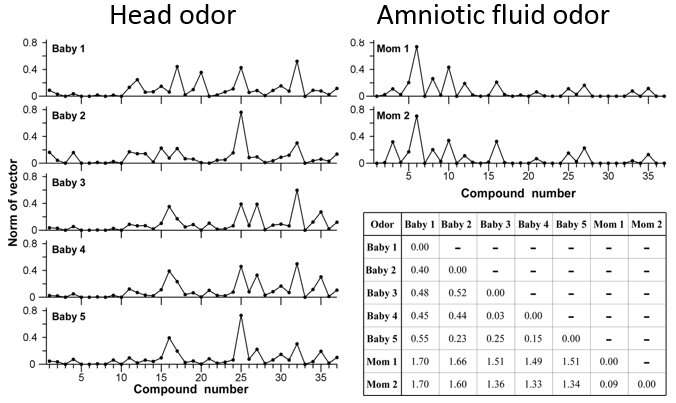 It was discovered that the odor samples from babies’ heads are more distinct from each other than those obtained from amniotic fluid. Furthermore, the odor profiles of Babies 1 and 2, which were collected within an hour after birth, looked less similar to each other than those of Babies 3, 4 and 5, which were collected 2 to 3 days after birth. These results suggest that a baby can strongly express its individuality through the odor soon after birth compared to a few days later.

3. Similarities and variations in sensory recognition of the odors

A total of 62 Kobe University students aged 18-24 (31 female and 31 male) were asked to smell one of three samples. The samples were artificial odor mixtures based on the baby’s head and amniotic fluid samples taken at Hamamatsu University Hospital. Fifteen minutes later they were then asked to determine which of the four test samples (three artificial odor mixtures and the control solvent) was identical to the odor they had smelled earlier. Participants were also requested to rate their level of confidence in their decision. These were blind experiments; the participants were unaware of the type and origin of the samples. 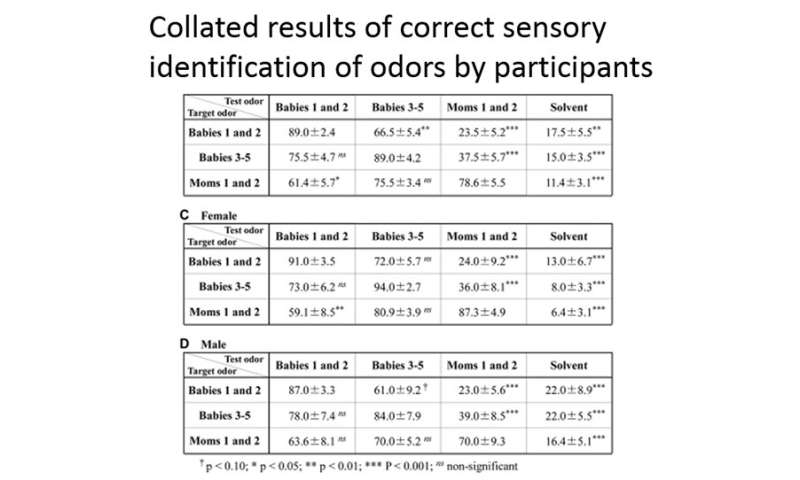 The chemical analysis and olfactory recognition of babies’ head odors in this study are potentially important contributions to the understanding of mother-infant bond formation and early non-verbal communication.