WAUKON, Iowa — Marjorie Kruger was stunned to learn last fall that she would have to leave the nursing home where she’d lived comfortably for six years.

The Good Samaritan Society facility in Postville, Iowa, would close, administrators told Kruger and 38 other residents in September. The facility joined a growing list of nursing homes being shuttered nationwide, especially in rural areas.

“The rug was taken out from under me,” said Kruger, 98. “I thought I was going to stay there the rest of my life.”

Her son found a room for her in another Good Samaritan center in Waukon, a small town 18 miles north of Postville. Kruger said the new facility is a pleasant place, but she misses her friends and longtime staffers from the old one. “We were as close as a nice family,” she said.

The Postville facility’s former residents are scattered across northeastern Iowa. Some were forced to move twice, after the first nursing home they transferred to also went out of business.

Owners say the closures largely stem from a shortage of workers, including nurses, nursing assistants, and kitchen employees.

The problem could deepen as pandemic-era government assistance dries up and care facilities struggle to compete with rising wages offered by other employers, industry leaders and analysts predict. Many care centers that have managed to remain open are keeping some beds vacant because they don’t have enough workers to responsibly care for more residents.

The pandemic brought billions of extra federal dollars to the long-term care industry, which was inundated with covid-19 infections and more than 160,000 resident deaths. Many facilities saw business decline amid lockdowns and reports of outbreaks. Staff members faced extra danger and stress.

The industry is still feeling the effects.

From February 2020 to November 2021, the number of workers in nursing homes and other care facilities dropped by 410,000 nationally, according to the federal Bureau of Labor Statistics. Staffing has rebounded only by about 103,000 since then.

In Iowa, 13 of the 15 nursing homes that closed in 2022 were in rural areas, according to the Iowa Health Care Association. “In more sparsely populated areas, it’s harder and harder to staff those facilities,” said Brent Willett, the association’s president. He noted that many rural areas have dwindling numbers of working-age adults.

The lack of open nursing home beds is marooning some patients in hospitals for weeks while social workers seek placements. More people are winding up in care facilities far from their hometowns, especially if they have dementia, obesity, or other conditions that require extra attention.

Colorado’s executive director of health care policy and financing, Kim Bimestefer, told a conference in November that the state recognizes it needs to help shore up care facilities, especially in rural areas. “We’ve had more nursing homes go bankrupt in the last year than in the last 10 years combined,” she said.

In Montana, at least 11 nursing homes — 16% of the state’s facilities — closed in 2022, the Billings Gazette reported.

Nationally, the Centers for Medicare & Medicaid Services reported recently that 129 nursing homes had closed in 2022. Mark Parkinson, president of the American Health Care Association, said the actual count was significantly higher but the federal reports tend to lag behind what’s happening on the ground.

For example, a recent KHN review showed the federal agency had tallied just one of the 11 Montana nursing home closures reported by news outlets in that state during 2022, and just eight of the 15 reported in Iowa.

Demand for long-term care is expected to climb over the next decade as the baby boom generation ages. Willett said his industry supports changing immigration laws to allow more workers from other countries. “That’s got to be part of the solution,” he said.

The nursing home in Postville, Iowa, was one of 10 care centers shuttered in the past year by the Good Samaritan Society, a large chain based in South Dakota.

“It’s an absolute last resort for us, being a nonprofit organization that would in many cases have been in these communities 50 to 75 years or more,” said Nate Schema, the company’s CEO.

The Evangelical Lutheran Good Samaritan Society, the full name of the company, is affiliated with the giant Sanford Health network and serves 12,500 clients, including residents of care facilities and people receiving services in their homes. About 70% of them live in rural areas, mainly in the Plains states and Midwest, Schema said.

Schema said many front-line workers in nursing homes found less stressful jobs after working through the worst days of the covid pandemic, when they had to wear extra protective gear and routinely get screened for infection in the face of ongoing risk.

Lori Porter, chief executive officer of the National Association of Health Care Assistants, said nursing home staffing issues have been building for years. “No one that’s been in this business is in shock over the way things are,” she said. “The pandemic put a spotlight on it.”

Porter, who has worked as a certified nursing assistant and as a nursing home administrator, said the industry should highlight how rewarding the work can be and how working as an aide can lead to a higher-paying job, including as a registered nurse.

Care industry leaders say that they have increased wages for front-line workers but that they can’t always keep up with other industries. They say that’s largely because they rely on payments from Medicaid, the government program for low-income Americans that covers the bills for more than 60% of people living in nursing homes.

In recent years, most states have increased how much their Medicaid programs pay to nursing homes, but those rates are still less than what the facilities receive from other insurers or from residents paying their own way. In Iowa, Medicaid pays nursing homes about $215 per day per resident, according to the Iowa Health Care Association. That compares with about $253 per day for people paying their own way. When nursing homes provide short-term rehabilitation for Medicare patients, they receive about $450 per day. That federal program does not cover long-term care, however. 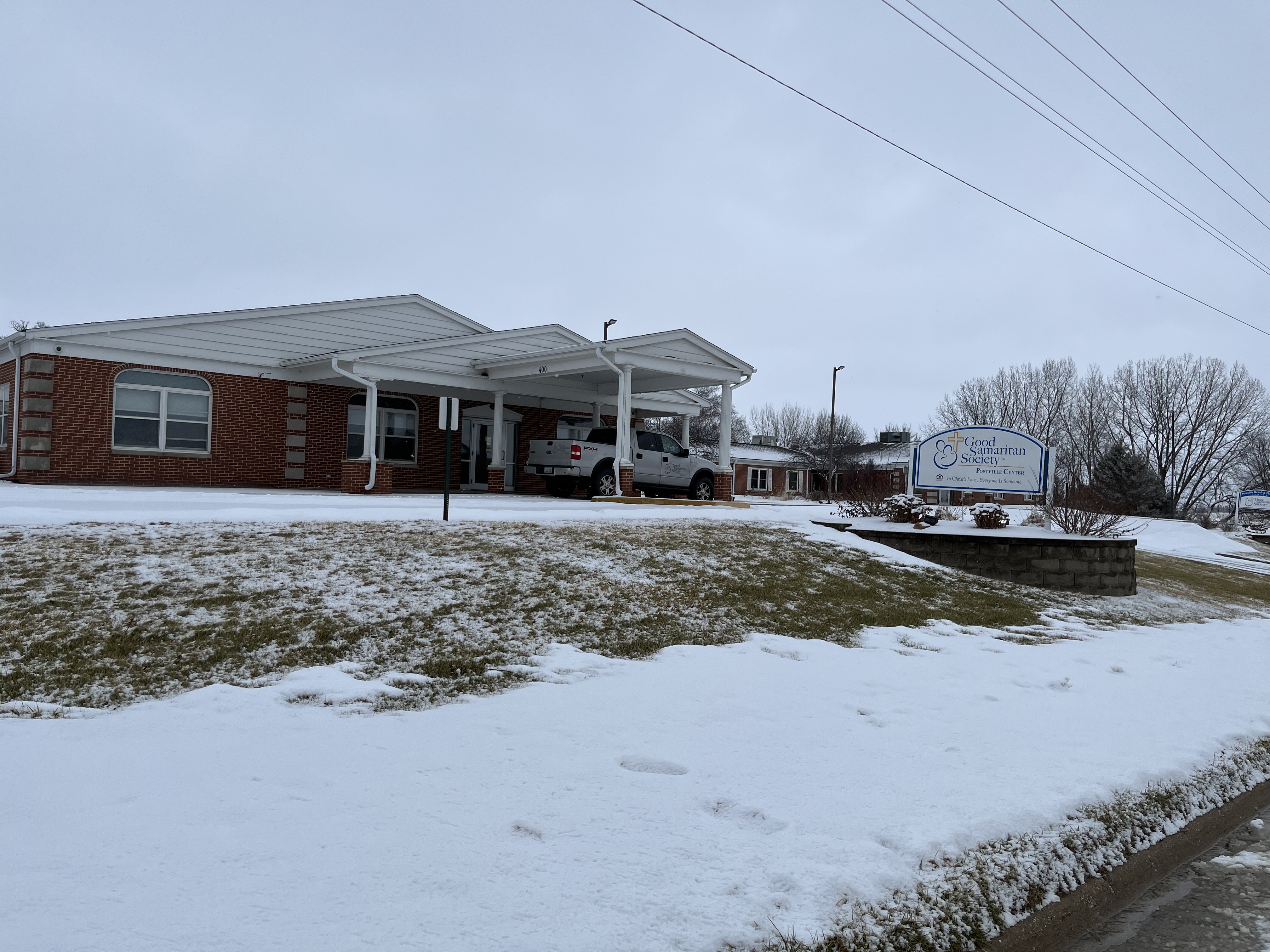 Willett said a recent survey found that 72% of Iowa’s remaining nursing homes were freezing or limiting admissions below their capacity.

The Prairie View nursing home in Sanborn is one of them. The facility, owned by a local nonprofit, is licensed for up to 73 beds. Lately, it has been able to handle only about 48 residents, said administrator Wendy Nelson.

“We could take more patients, but we couldn’t give them the care they deserve,” she said.

Nelson has worked in the industry for 22 years, including 17 at Prairie View. It never has been easy to keep nursing facilities fully staffed, she said. But the pandemic added stress, danger, and hassles.

“It drained the crud out of some people. They just said, ‘I’m done with it,’” she said.

She realizes other rural employers also are stretched.

“I know we’re all struggling,” Nelson said. “Dairy Queen’s struggling too, but Dairy Queen can change their hours. We can’t.”

David Grabowski, a professor of health care policy at Harvard Medical School, said some of the shuttered care facilities had poor safety records. Those closures might not seem like a tragedy, especially in metro areas with plenty of other choices, he said.

“We might say, ‘Maybe that’s the market working, the way a bad restaurant or a bad hotel is closing,’” he said. But in rural areas, the closure of even a low-quality care facility can leave a hole that’s hard to fill.

For many families, the preferred alternative would be in-home care, but there’s also a shortage of workers to provide those services, he said.

The result can be prolonged hospital stays for patients who could be served instead in a care facility or by home health aides, if those services were available.

Rachel Olson, a social worker at Pocahontas Community Hospital in northwestern Iowa, said some patients wait a month or more in her hospital while she tries to find a spot for them in a nursing home once they’re stable enough to be transferred.

She said it’s particularly hard to place certain types of patients, such as those who need extra attention because they have dementia or need intravenous antibiotics.

Olson starts calling nursing homes close to the patient’s home, then tries ones farther away. She has had to place some people up to 60 miles away from their hometowns. She said families would prefer she find something closer. “But when I can’t, I can’t, you know? My hands are tied.”