The day after his 8-month-old baby died, Kingsley Raspe opened the mail and found he had been sent to collections for her care.

That notice involved a paltry sum, $26.50 — absurd really, given he’d previously been told he owed $2.5 million for treatment of his newborn’s congenital heart defect and other disorders.

Raspe and his wife, Maddie, had endured watching doctors crack open the chest of their pigtailed daughter, Sterling, whom they called “sweet Sterly gurl.” The health team performed so many other procedures. But it couldn’t keep her — or her parents’ dreams for her — alive.

The bills lived on for them, as they do for many other families of premature and very sick infants who don’t survive.

“What a lasting tribute to the entire experience,” Kingsley said angrily. “The process was just so heartless.”

More than 300,000 U.S. families have infants who require advanced medical attention in newborn intensive care units every year. Some babies stay for months, quickly generating astronomical fees for highly specialized surgeries and round-the-clock care. The services are delivered, and in U.S. health care, billing follows. But for the smaller fraction of families whose children die, the burden can be too much to bear.

A patchwork of convoluted Medicaid-qualification rules seek to defray these kinds of bills for very sick children. But policies differ in each state, and many parents — especially those, like the Raspes, who have commercial insurance — don’t know to apply or think they won’t qualify.

Also, because many crises that befall premature or very sick babies are in-the-moment emergencies, there may not be time for the preapprovals that insurers often require for expensive interventions. That leaves parents in crisis — or in mourning — tasked with fighting with insurers to have treatment covered.

Three families detailed for KHN how medical bills compounded their suffering during a time when they were just trying to process their loss.

As the hospital in Reno, Nevada, was converting a parking garage into a covid-19 unit in November 2020, Bennett Markow came into the world four months early. He weighed less than a pound. His care team loved to sing “Bennie and the Jets” to him as a nod to the jet ventilator keeping his tiny lungs working.

On Jan. 20, 2021, when Bennett was 2 months old, his parents were told he needed to go to UC Davis Children’s Hospital in Sacramento, California, for specialized care that could keep him from going blind. The transfer team would be there in an hour. And the Nevada care team said that because it was an emergency, the family needn’t worry about their insurance or the method of transportation.

Bennett’s eye problem ended up being less severe than the doctors had feared. And Crissa Markow and her husband, A.J., were billed for the plane ride from REACH Air Medical Services, which turned out to be out of network. Jason Sorrick, vice president of government relations for REACH’s parent company, Global Medical Response, said the ride happened during a “lapse” in Bennett’s Medicaid coverage.

The Markows said there was no lapse. They hadn’t applied yet because they thought they wouldn’t qualify — the family is middle-class, and Bennett was on Crissa’s insurance. They did not know they should until a social worker at UC Davis gave them more information — after the flight.

Crissa Markow said her heart dropped to her toes when she realized she was being billed over $71,000, more than she makes in a year as a social worker. (The No Surprises Act, which aims to eliminate surprise billing, could have prevented some of the family’s headaches — but Bennett was born before it went into effect this year.) 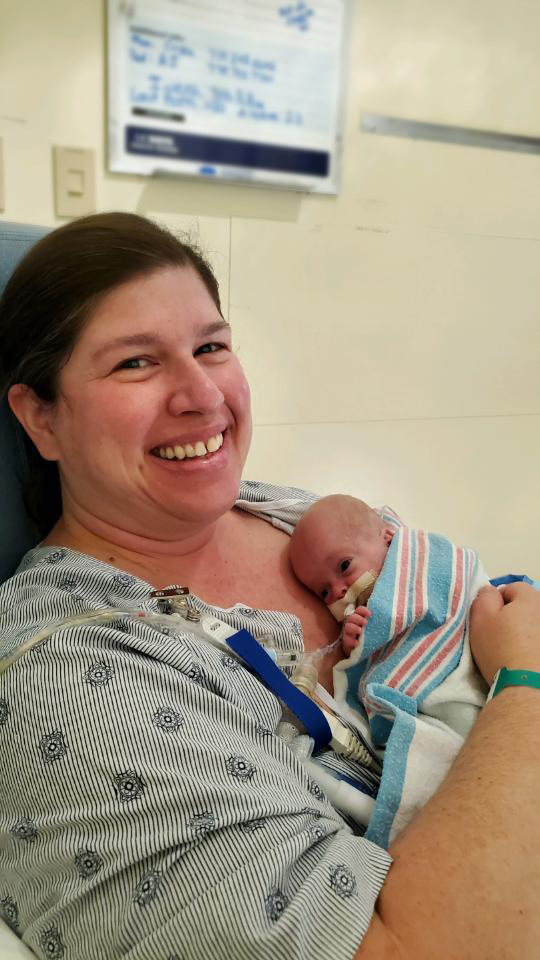 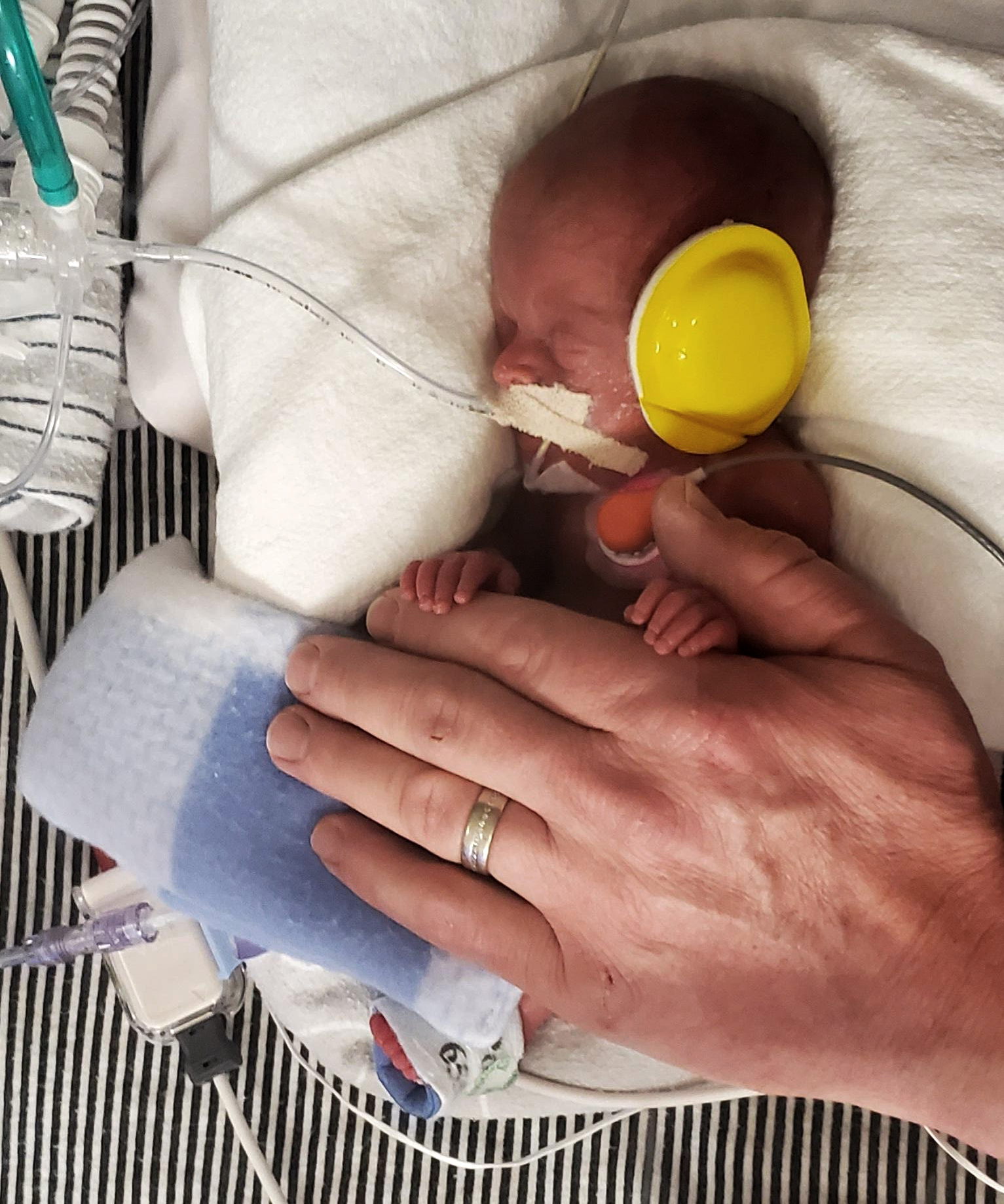 Although Crissa was used to working toward solutions, the billing quagmires she found herself in while juggling Bennett’s care, her job, her other son, and the travel logistics to stay with Bennett about 2½ hours away from her home were overwhelming. Crissa estimates she spent six to eight hours a week dealing with medical bills to keep them from being sent to collections — which still happened.

Bennett died last July after doctors said his lungs could not fight anymore. The Markows spent their bereavement leave battling with insurers and other billing agencies.

Finally, Crissa called REACH, the air transport company, and said: “Look, my son died. I just want to be able to grieve, I want to focus on that. Dealing with this bill is traumatic. It’s a reminder every day I shouldn’t have to be fighting this.”

By October, the Markows had settled the bill with REACH on the condition that they not disclose the terms. Sorrick said that the company reaches agreements based on the financial and personal situations of each patient and their family and that the company’s patient advocates had talked to Crissa Markow 17 times.

“If every settlement amount was disclosed publicly, then those rates become the expectation of all patients and insurance providers,” Sorrick said. “Ultimately, that would lead to all patients wanting to pay below cost, making our services unsustainable.”

Crissa Markow’s employer-provided insurance paid $6.5 million for Bennett’s care, not including what was covered by Medicaid. The Markows paid roughly $6,500 out-of-pocket to hospitals and doctors on top of their REACH settlement. But it was not those amounts — which the couple would have happily paid to save their son — but the endless harassment and the hours spent on the phone that haunt them.

“I just wanted to be with Bennett; that’s all I wanted to do,” Crissa Markow said. “And I just spent hours on these phone calls.”

Jack Shickel was born with stunning silver hair and hypoplastic left heart syndrome. Even though he was surrounded by wires and tubes, the nurses at UVA Children’s Hospital would whisper to Jessica and her husband, Isaac, that they had a truly “cute” baby.

But his congenital disorder meant the left side of his heart never fully developed. Each year in the U.S., over a thousand babies are born with the syndrome.

After two surgeries, Jack’s heart could not pump enough blood on its own. He made it 35 days.

Weeks after his death, when the Shickels were trying to muddle through life without him in Harrisonburg, Virginia, they called the hospital billing department about two confusing bills. They were then told the full cost of his care was $3.4 million. 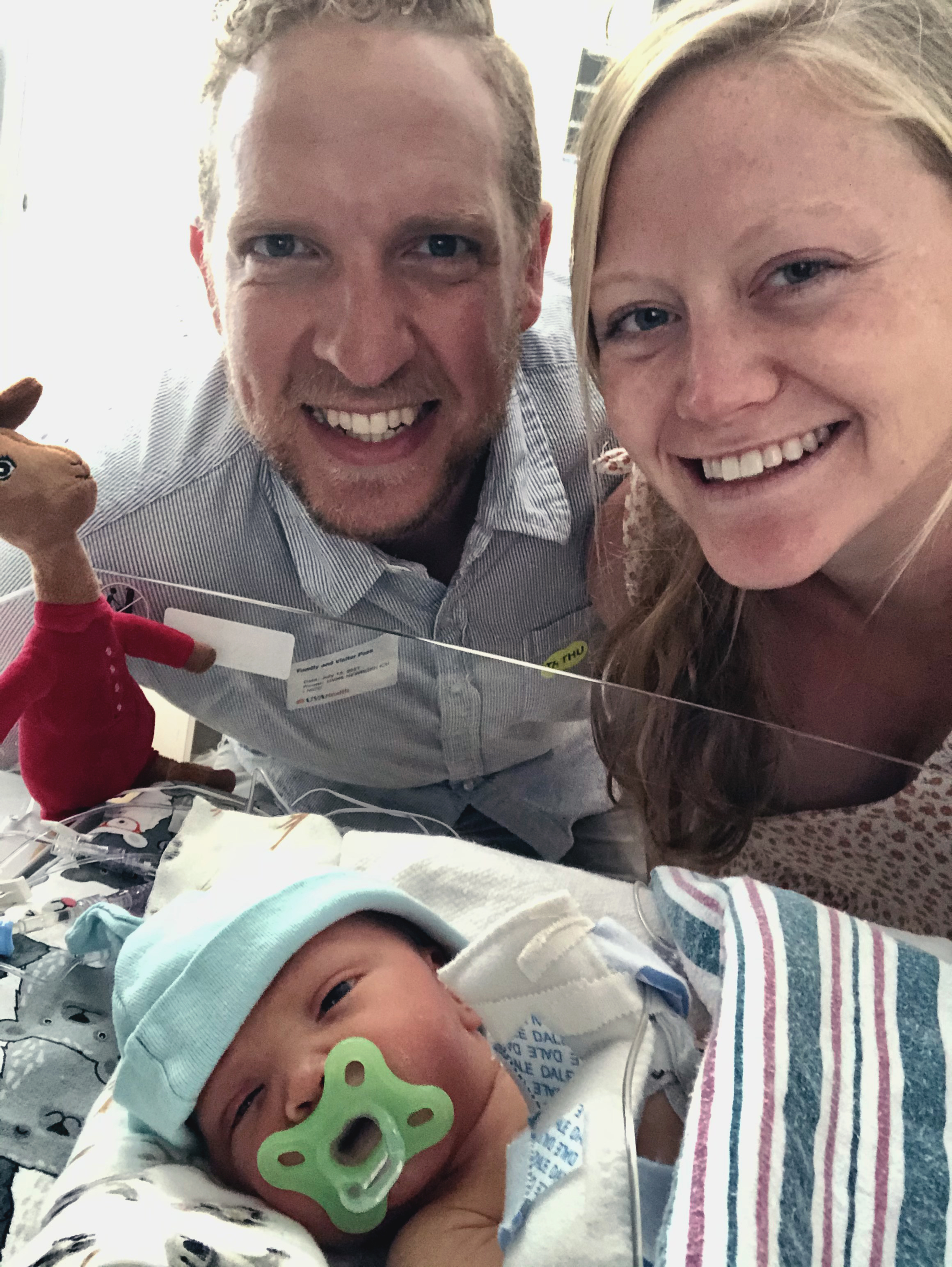 Bills from out-of-network labs and other prior approval notifications continued to overwhelm their mailbox. Eventually, they figured out how to get Medicaid. The Shickels ended up paying only $470.26.

Jessica got the final bills in March, seven months after Jack’s death.

She noted that all of this was happening as the University of Virginia Health System said it was rolling back its aggressive billing practices after a KHN investigation found the prestigious university hospital was putting liens on people’s homes to recoup medical debt.

After KHN reached out for comment, the Shickels got a call from UVA saying that the hospital was refunding their payment.

The hospital care team had given the family a pamphlet about what to do when grieving, but a more useful one, Jessica said, would have been titled “How Do You Deal With Medical Bills After Your Child Has Died?”

Kingsley Raspe likes to say Sterling was “one special little lady” — not only did she have the same congenital heart defect as Jack Shickel, but she was also diagnosed with Kabuki syndrome, a rare disorder that can severely affect development. Sterling also had hearing loss, spinal cord issues, and a compromised immune system.

An explanation of benefits from the Raspes’ commercial insurance indicated the couple would need to pay $2.5 million for Sterling’s care — an amount so large the numbers didn’t all fit in the column. Even Kingsley’s suspicion that the $2.5 million charge was likely erroneous — in large part or in whole — didn’t erase the sheer panic he felt when he saw the number.

Sterling had been denied Medicaid, which is available to children with complex medical problems in some states. Kingsley had filed an application for the government insurance, which had to be submitted by mail from the family home in Gary, Indiana. In doing so, he broke the strict protocols on covid exposure set early in the pandemic at the Ronald McDonald charity house near the Illinois hospital where Sterling was being treated and jeopardized his ability to stay there.

In rejecting the application, Indiana cited an income threshold and other technical reasons.

Everyone kept telling Kingsley and Maddie to get divorced so Sterling would qualify for Medicaid. But that wasn’t an option for Kingsley, a British citizen who is in the U.S. on a green card after meeting Maddie on Tinder. 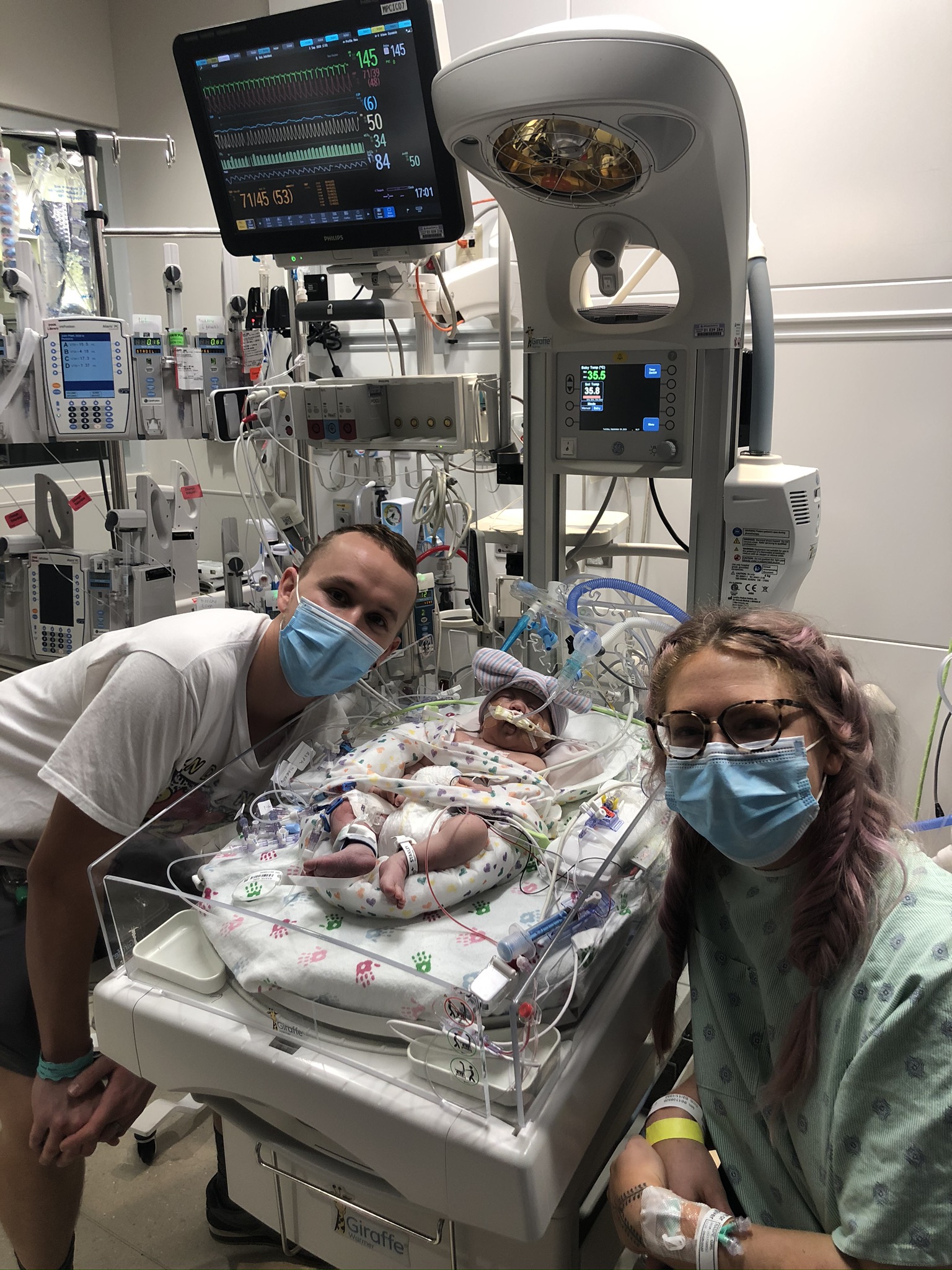 Ultimately, Kingsley’s insurer revised the faulty notice that he owed $2.5 million. The family was told the mistake had occurred because Sterling’s initial hospital stay and surgeries had not been preapproved, although Kingsley said the heart defect was discovered halfway through the pregnancy, making surgery inevitable.

Throughout Sterling’s life, Kingsley did his programming job at his daughter’s bedside, in her hospital room. As a web developer, he created visualizations that break down Sterling’s expensive care — it helped him make sense of it all. But he cries when he remembers those days.

He hates that Sterling’s life can be reduced to a 2-inch stack of printed-out medical bills and the phone calls he still must endure from errant billers.

Despite receiving a plethora of other bills in the tens of thousands, he and his wife eventually paid their $4,000 deductible, along with a smattering of smaller charges and fees for equipment rentals that weren’t covered. In April, Maddie gave birth to a son, Wren, and Kingsley said he knows Sterling served as her brother’s guardian angel.

“My daughter passed away. I’m not unscathed, but I’m not in financial ruin. The same can’t be said for every family,” he said. “How lucky am I? I went through the worst thing imaginable, and I consider myself lucky — what kind of weird, messed-up logic is that?”

Contact your insurance company to talk through your NICU stay costs, including what is covered and what is not. If your baby’s not already on your plan, make sure to add them.

Speak to a social worker immediately about applying for Medicaid or the Supplemental Security Income program, known as SSI. If your child qualifies, it can dramatically reduce your personal cost for a child with extensive medical bills.

The March of Dimes offers a “My NICU Baby” app designed to help you wade through the overwhelming experience. The nonprofit says the app can help you learn about caring for your baby in the NICU and at home, as well as monitor your baby’s progress, manage your own health, and keep track of your to-do list and questions.

If particular insurers or bills are confusing, reach out to your state insurance office. All states offer consumer support, and some states have dedicated advocates who can help you.

Bill of the Month is a crowdsourced investigation by KHN and NPR that dissects and explains medical bills. Do you have an interesting medical bill you want to share with us? Tell us about it!