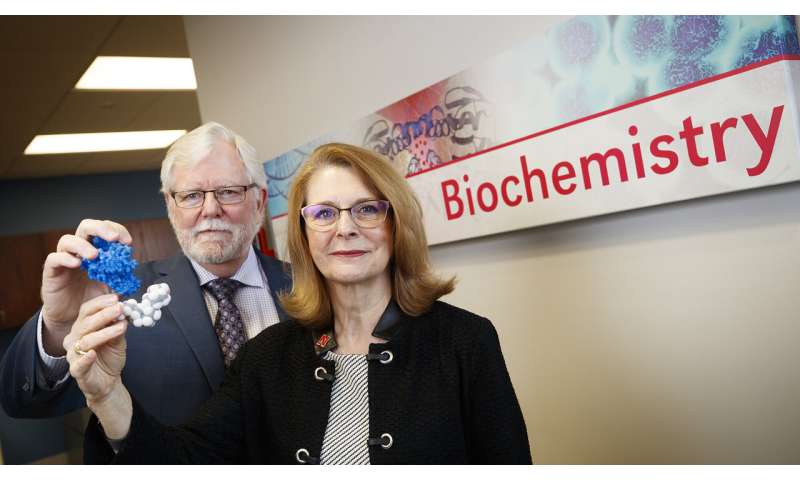 Locking a biochemical gate that admits fuel into immune-suppressing cells could slow tumor progression and assist the treatment of multiple cancers, says new research from the Wistar Institute, the University of Nebraska-Lincoln and others.

Published April 17 in the journal Nature, the study found elevated levels of fatty acid transporter protein 2, or FATP2, in a type of cell known to muffle immune responses and impede cancer therapies. After isolating tumorous cells from humans and mice, the researchers also discovered substantially higher numbers of an energy-granting lipid that FATP2 helps produce and traffic into cells.

When the researchers knocked out a gene linked to FATP2, they found that the tumors of several cancers—lymphoma, lung carcinoma, colon carcinoma and pancreatic cancer—grew markedly slower in mice. Administering the FATP2-inhibiting compound Lipofermata—identified by Nebraska’s Concetta DiRusso in the mid-2000s—likewise helped slow and even reject tumors when paired with a drug that disrupts cellular replication.

The study suggests that targeting FATP2 in the immune-suppressing cells could block the resulting buildup of lipids and mitigate tumor progression without significant side effects, the team said.

“I think the unique thing, and why this will cause some excitement, is that this is not specific to one cancer,” said DiRusso, a study co-author and George Holmes University Professor of biochemistry. “Being able to target some of the cells that are common to different cancers is something that’s highly desired.

“It doesn’t wipe (tumors) out totally, but it’s a piece of the picture. We’re now more interested in combination therapy. It’s not one target but (instead) targeting in multiple ways, because cancer is smart. Cancer finds a way around our best drugs, which is why these combinations of drugs are so powerful and, we expect, more effective.”

The Wistar Institute’s Dmitry Gabrilovich and colleagues first noticed an uptick of FATP2 in solid tumors several years ago. Their observation prompted Gabrilovich to contact Nebraska biochemist Paul Black, who has studied the fundamentals of how fat molecules cross cellular membranes.

The Black Lab’s early research in yeast identified a gene segment and associated protein that activate and carry fatty acids into cells, where they get metabolized for energy or embedded into membranes. That protein? FATP2.

“If you’ve got a gate sitting on the membrane that controls the amount of fat that gets in, and then you start screwing around with that gate, it’s going to impact things downstream,” said Black, Charles Bessey Professor and chair of biochemistry. “And if a cancer cell needs to be fed lipid so it can undergo metastasis and really become a nasty disease, it has to up-regulate that protein. So this gate is playing a very pivotal role in all of these metabolic systems.”

Black’s prior research also helped determine that there were two genetic variants of FATP2: one to prime fatty acids for metabolism, another to actually transport them across cellular membranes. That important distinction informed the efforts of DiRusso’s lab, which screened more than 100,000 anti-FATP2 compound candidates to suss out which might help combat obesity and Type 2 diabetes.

The blue-ribbon candidate, Lipofermata, essentially eliminates fat accumulation in tissue cultures and reduces the absorption of lipids in mice by more than 60 percent—leading DiRusso to patent the drug’s use in treating metabolic diseases. So when Black was contacted by Gabrilovich, he quickly touched base with DiRusso. The duo ultimately supplied Gabrilovich with the biochemical insights, samples and Lipofermata needed to carry out his team’s experiments.

“Whether it be cancer biology or diabetes or whatever you’re going after in this biomedical world, you can’t do it by yourself anymore,” Black said. “Long gone are the days where we can just sit up and be a little silo somewhere, just doing our own things. Some of our early mechanistic work was done that way, but the work (now) is far too complicated. It’s just a ton of information.