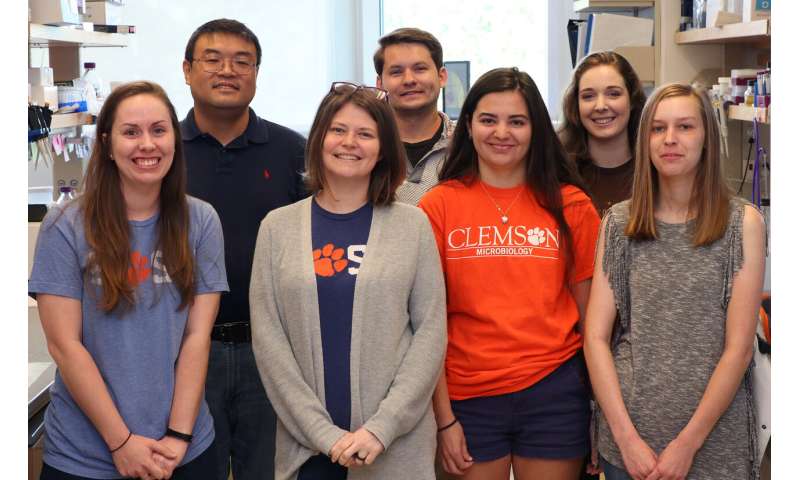 A faculty-led team of graduate and undergraduate researchers from Clemson University’s Eukaryotic Pathogens Innovation Center (EPIC) has unveiled new findings that may help pave the way to an eventual cure for a parasitic infection that affects millions around the nation and world.

Research led by Zhicheng Dou, an assistant professor in the College of Science’s department of biological sciences, has been published in PLOS Pathogens, a high-profile microbiology journal. The study titled “An ortholog of P. falciparum chloroquine resistance transporter (PfCRT) plays a key role in maintaining the integrity of the endolysosomal system in Toxoplasma gondii to facilitate host invasion” focuses on the usefulness of Toxoplasma—a human pathogen with a high infection rate—in examining ways to combat other pathogens, including malaria.

Brock Thornton, a Ph.D. student in Dou’s lab, said the goal of the research is to derive a better understanding of what is vital for the parasite to remain infective and, ultimately, to find targets for treatment.

“We discovered that by altering one of the parasite’s organelle, specifically by disrupting a certain transporter, we were able to remove the function of the parasites being able to process their invasion proteins so that they weren’t as infective as before,” Thornton said.

Dou said about 40 million Americans have toxoplasmosis, but few are aware of it because it does not typically cause strong symptoms.

“Most people have immunity strong enough so that they can quickly eliminate the initial acute infections, but Toxoplasma parasites can hibernate inside the central nervous system of their hosts to sustain their chronic infections,” Dou said. “Certain groups, such as cancer patients, HIV carriers and organ-transplant patients, exhibit significant and even lethal symptoms because their immunity is dramatically suppressed to control the infections.”

Currently available treatment for toxoplasmosis can cure it during the acute infection stage, but Dou said strong side effects from the drug mean many patients are unable to complete the month-long treatment.

“This is important,” he said. “We have to identify new compounds and new chemicals to cure the toxoplasmosis.”

But before this can happen, more information is needed about the basic biology of Toxoplasma parasites. That’s where the team’s research comes in. It might also have an important impact on the treatment of malaria, a related pathogen that has become resistant to traditional chloroquine treatment.

“Malaria parasites contain a similar organelle called the food vacuole, which displays similar functions as the organelle investigated in our research article,” Dou said. “It has a very acidic environment for food digestion and nutrient utilization, like the human stomach. If we can find a way of neutralizing it, this organelle cannot digest food efficiently, which will cause the death of parasites.”

Dou said that many years ago, people applied chloroquine to treat malaria infections because this basic compound can enter the food vacuole to neutralize its acidity, further compromising its digestive function. However, after years and years, this strategy did not work anymore because malaria parasites mutated one protein called the chloroquine resistant transporter, which can pump out the chloroquine from the food vacuole.

Dou said Thornton and the paper’s other authors played important roles in the research.

“Brock joined the lab as a master’s student,” Dou said. “She tried to finish this study during the last almost two years. She did very compelling work, which I think triggered her interest in pursuing a Ph.D. Generally, such high-level research is driven by post-docs—not by junior graduate students and undergrad students. This is a very good opportunity for them to experience real biomedical research, especially at the molecular level. I want to provide this environment for graduate and undergrad students who plan to pursue research as career goals. These next-generation M.D./Ph.D. students are the hope of our future biomedical research.” 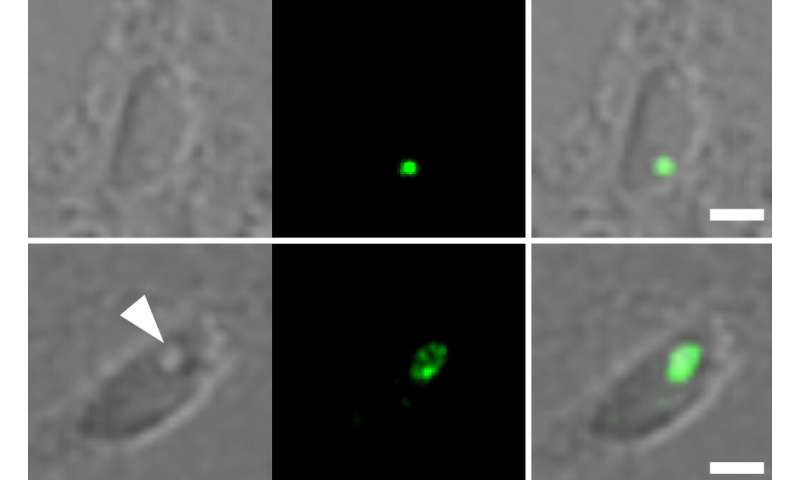 Thornton has an undergraduate degree from Mississippi State University and spent two years in a fellowship with the National Institutes of Health at the Rocky Mountain Laboratories in Montana. She came to Clemson for a master’s degree in microbiology, but Dou’s mentorship made a profound impact on her career path.

“Dr. Dou was really supportive the whole time and was encouraging me to keep my options open,” Thornton said. “My first plan was to get my master’s degree and go work in a lab and be done with school. Ultimately, I realized that getting my Ph.D. will allow me to go further and really accomplish what I think will make me satisfied in the long run in my career.”

Amy Bergmann is the lab manager and also conducts her own research.

“The main goal in all of our research is for potential treatments to help save lives in the future,” Bergmann said. “That’s what we all want to happen.”

Katherine Floyd, a junior majoring in biochemistry and microbiology, said that participating in published research is not something she expected to do at the undergraduate level.

“Working in the lab has made me definitely want to do a Ph.D.,” Floyd said. “Before, I knew I was going to do something after undergrad, but I wasn’t sure how far I wanted to go. I definitely want to continue doing research as a career. I feel a lot more prepared for graduate school, and I know I will like it once I’m there because I’m simulating as much as I can as an undergrad.”

“Definitely not all grad school experiences are this way,” she said. “I feel super lucky to have gotten to work in Dr. Dou’s lab and have him be so supportive, forward-moving and forward-thinking with things like this. Getting a paper published within my first couple of years being here has been incredibly exciting.”

Bergmann said Dou sets the tone of the lab through his hands-on research and concern about those who work there.

“Working in this lab, we are a family,” she said. “You don’t see that in a lot of labs, but we basically are a family. I joke and say I’m the lab mom and I take care of everybody, but we take care of each other. That’s why we’re all on this paper, because we work so well together. It’s not cutthroat. It’s ‘Let me help you’ and ‘I’ve got your back,’ which is very beneficial when you’re doing work like this.”

For undergraduate students like Floyd, the work means gaining even more than what can be found in a classroom.

“They are the most important part of my college experience,” she said. “They really are a family.”

Researchers from EPIC are making important discoveries toward future treatments of parasitic infections while cultivating an atmosphere that challenges students and affords them opportunities to excel beyond their years. Dou said the research is important, but only part of the equation.