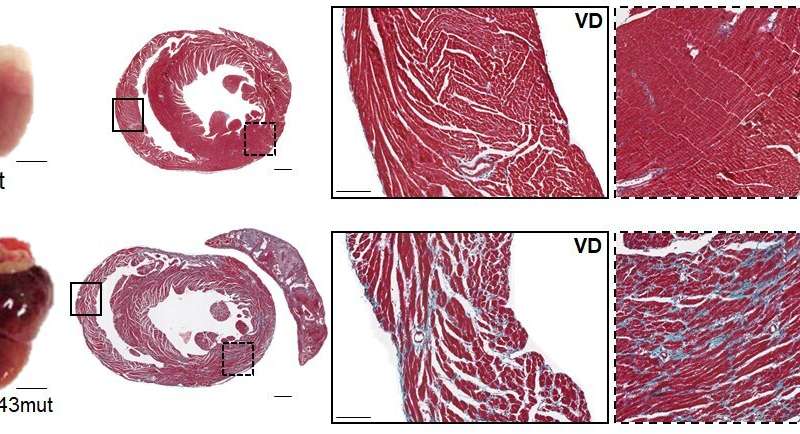 Arrhythmogenic right ventricular cardiomyopathy type 5 (ARVC5) is a fatal genetic disease for which there is unfortunately no cure. Now, scientists at the Centro Nacional de Investigaciones Cardiovasculares (CNIC) and Puerta de Hierro Majadahonda Hospital (Spain) have discovered a possible treatment for this rare disease. The research team, whose findings are published in Circulation, show that strategies to inhibit the kinase GSK3β in mice with the disease reduce fibrosis and improve heart function.

Arrhythmogenic cardiomyopathy affects an estimated 0.02% to 0.1% of the population, and is therefore classed as a rare disease. ARVC5 is the most aggressive subtype and is caused by a mutation in the TMEM43 gene. The first ARVC5 patients were identified in the island of Newfoundland, Canada, but the disease has since been detected in other regions around the world, including Spain.

The Spanish scientists said that during the early “hidden” phase of the disease, patients generally show no symptoms, despite already being at risk of arrhythmias and sudden death. Although at early stages the disease predominantly affects the right ventricle, as fibrosis expands it can also impair left ventricular function, and patients develop symptoms and manifestations of heart failure that can require heart transplant.

“Nevertheless, the mechanisms underlying this disease are unknown, and there is currently no cure,” said Dr. Lara Pezzi. Current treatments are therefore palliative, and the main emphasis is on the prevention of sudden cardiac death by fitting an implantable cardioverter defibrillator (ICD), with subsequent management of heart failure, and possibly heart transplant.

In a clear example of translational research, the groups led by Dr. Lara Pezzi and Dr. García-Pavía joined forces to find new treatments for this devastating disease that could be used in newly diagnosed patients at Puerta de Hierro hospital. Summarizing the challenge faced by the research team, Dr. García-Pavía commented, “We were confronted by a disease about which very little was known and that causes the very early death of several people from the same family.”

“We realized that to identify effective treatments we needed to get a better understanding of the disease from its earliest stages. For this, we needed an animal model of the disease that we could study from birth,” Dr. García-Pavía continued. The two research groups together developed a transgenic mouse line that expresses the mutant version of the human protein TMEM43 and mimics the human disease. The researchers found that the mutant TMEM43 protein activates the protein kinase GSK3β . This leads to the progressive death of heart cells, which are gradually replaced by fibrotic tissue, one of the most characteristic signs of the disease. “After a few months, the hearts of these mice had too few cells to pump blood efficiently, and the heart failure resulted in the death of the animals,” explained first author Laura Padrón-Barthe.

The research team tested several possible therapeutic approaches in the mouse model. While treatments directly targeting fibrosis were ineffective, positive results were obtained with two strategies for inhibiting GSK3β, one based on pharmacological inhibition and the other on overexpression of the calcineurin subunit CnAβ1. As Dr. Lara Pezzi explained, “both approaches reduced the rate of cardiac cell death, improved cardiac contraction, and prolonged survival.”

Nevertheless, the scientists warn that, although the transgenic mouse model mimics human ARVC5, it does not reproduce all disease characteristics. For example, male and female mice are equally affected, whereas the human disease is much more aggressive in men than in women.