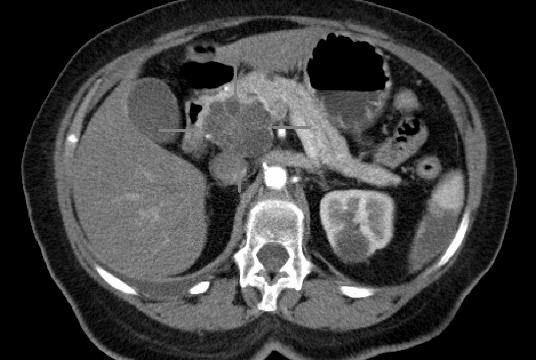 Cancer cells demand enormous amounts of molecular “food” to survive and grow, and a study published March 27 online in Nature by researchers at The University of Texas MD Anderson Cancer Center may have identified a new approach to starve the cells of one of the most common and deadly cancers, pancreatic cancer.

A state-of-the-art approach, developed by the team of senior author, Giulio Draetta, M.D., Ph.D., chief scientific officer and professor of genomic medicine, was used to track how pancreatic cancer cells rearrange proteins on their surface. This uncovered a protein, called syndecan-1 (SDC1), that moves to the cell surface in response to signals from mutant KRAS, a protein known to be present in more than 90 percent of pancreatic ductal adenocarcinomas.

The study further explained that the positioning of SDC1 on the cell surface is essential for pancreatic cancer cells to upregulate macropinocytosis, a mechanism cells use to scavenge resources from their environment to turn into energy or to prepare them to divide.

Although activation of macropinocytosis by mutant KRAS in pancreatic cancer has long been established, the molecular mechanics controlling the process have remained elusive. Draetta’s team provided evidence that SDC1 responds to signals from KRAS to accumulate on the surface of the cell and induce this pathway.

“To date, pharmacological inhibition of macropinocytosis has not been accomplished,” said Draetta. “Our findings on the critical role for SDC1 in regulating macropinocytosis in KRAS-driven pancreatic cancer invites exploration of SDC1 targeting for therapeutic intervention.”

The cell surface or “surfaceome” is dynamic, with the cell membrane shifting in response to signals from the cell and from the external environment. In cancer cells, genetic mutations give the cells strict instructions to prioritize pathways that will support their uncontrolled growth.

Draetta’s team thought that a detailed understanding of how the KRAS mutation reprioritized the functions of the cell membrane would reveal critical new details about the pathways pancreatic cancer cells use to survive.

“Multiple oncogenic processes are initiated at the cell surface, where KRAS physically and functionally interacts to direct signaling essential for malignant transformation and tumor maintenance,” said Draetta. “Insights into the complexity of the surfaceome have been technologically limited until recently, and in the case of pancreatic cancer, the genetic control of the function and composition of the pancreatic cancer surfaceome in the context of KRAS signaling remains largely unexplored.”

Because KRAS mutation is so frequent in pancreatic ductal adenocarcinoma—a devastating disease with only an 8-percent survival rate at five years—the researchers devised a way to study the cell surface in a pancreatic cancer model in which KRAS can be switched on and off.

The researchers found that proteins on the cell surface changed dramatically in response to KRAS expression, and SDC1 was among the most abundant proteins when KRAS was being expressed. This represented the first direct evidence of KRAS instructing SDC1 to move through the cell to do its job at the surface. Using different approaches to prevent SDC1 from integrating into the cell membrane, the researchers confirmed that, even though SDC1 may be present inside of cells, it only upregulates micropinocytosis when it is shuttled to the cell surface.

Despite understanding the importance of KRAS in keeping pancreatic cancer cells alive, researchers have had difficulty targeting KRAS. There are no drugs clinically available that adequately shut down KRAS signaling to kill cancer cells. Understanding that SDC1 is acting under the control of KRAS to supply energy to pancreatic cancer cells may enable tumors with this aggressive mutation to be treated by targeting SDC1 and its presence on the cell surface may make it more vulnerable to therapeutic intervention.