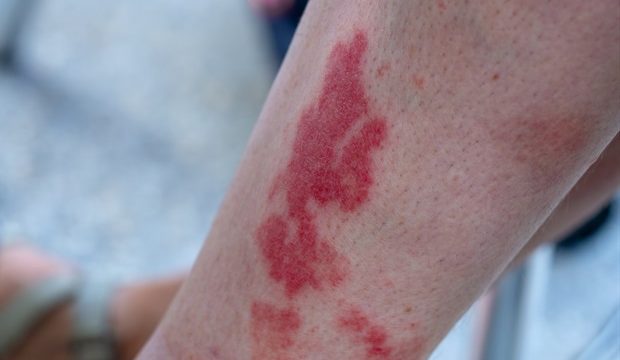 The key clinical presentation is purpura, which is a purple spotty rash on the skin that is due to bleeding from the underlying small blood vessels.  The rash is predominantly found on the lower extremities in most patients, but can occur on the trunk and upper extremities as well.

While the condition is probably mediated by the deposition of immune complexes, no etiology can be identified in a third to nearly a half of all cases.  Factors that have been implicated in its causation include pathologies such as inflammatory bowel disease, bacterial endocarditis, malignancies, and polyarteritis nodosa, an autoimmune disorder that specifically targets organs and tissues. Pharmaceutical products such as non-steroidal anti-inflammatory drugs and antibiotics have also been implicated.

Leukocytoclastic vasculitis may present as an acute or chronic condition, where the latter occurs in approximately 10% of patients and may either present with persistent lesions or intermittent recurrences. The purpuric lesions on the skin most commonly seen are palpable with a diameter of 1 -3 mm. While they may coalesce to form plaques, they usually do not ulcerate. Other findings, which are less commonly seen in affected patients include vesicles (small fluid filled lesions), bullae (large blisters), and pustules (pus containing blisters).

As immune complexes are deposited within the small blood vessels, they become leaky and small areas of hemorrhage begin to appear as they are injured by proteolytic enzymes and oxygen free radicals. The immune and inflammatory mediators include IgA, IgG, and IgM (antibodies); ANCA (autoantibodies produced by the immune system that erroneously attack neutrophils); and vascular adhesion molecules. The exact pathophysiological mechanisms of ANCA and adhesion molecules are unclear.

If IgA immune complexes are the dominant immunoglobulins involved, there is a greater chance of systemic involvement in both children and adults. In such instances, this form of leukocytoclastic vasculitis is called Henoch-Schönlein purpura and it is more frequent in children, especially after respiratory tract infections. The signs of systemic involvement include fever, myalgia (pain in the muscles), arthralgia (pain in the joints) hematuria (blood in the urine), melena (blood in the stools), abdominal pain, weakness, and numbness. When IgG or IgM immune complexes are involved, the prognosis is better, since there is a less likelihood of systemic pathologies.

In general, individuals with hypersensitivity vasculitis have a very good prognosis. However, if there is systemic involvement with organs such as the heart, lungs, and kidneys or the central nervous system, then there is increased morbidity with the potential for mortality. The cutaneous lesions are more often than not asymptomatic, but if symptoms do occur these present with itching and / or pain.

Treatment is usually varied and is targeted towards removing the offending culprit (e.g., pharmaceutical, food, or infection) in acute cutaneous cases, which are usually self-limited with a better prognosis. In chronic cases, the approach is much more complicated and may necessitate the use of systemic corticosteroids and immunosuppressive drugs, especially if there are systemic pathologies involved.

Dr. Damien Jonas Wilson is a medical doctor from St. Martin in the Carribean. He was awarded his Medical Degree (MD) from the University of Zagreb Teaching Hospital. His training in general medicine and surgery compliments his degree in biomolecular engineering (BASc.Eng.) from Utrecht, the Netherlands. During this degree, he completed a dissertation in the field of oncology at the Harvard Medical School/ Massachusetts General Hospital. Dr. Wilson currently works in the UK as a medical practitioner.