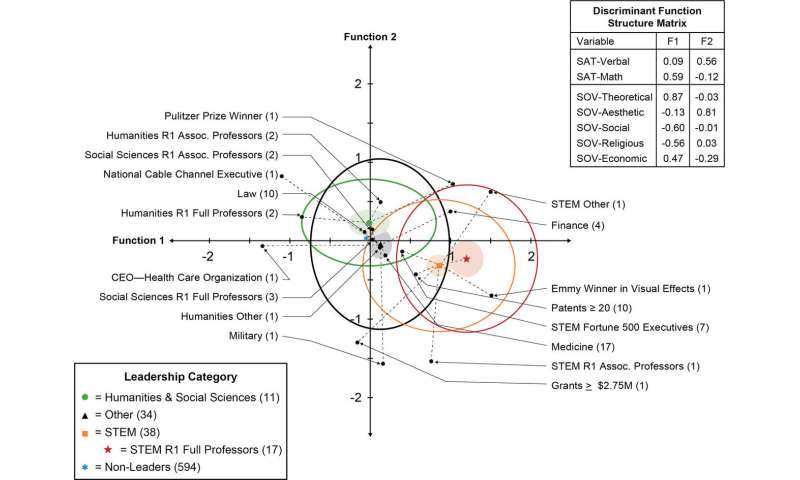 New findings from an ongoing 45-year Vanderbilt study reveal that patterns found in test scores and a psychological assessment measuring the personal values of nearly 700 intellectually gifted adolescents were highly predictive of the distinct fields of eminence they would occupy by age 50.

The results, published in Psychological Science, indicate that parents should be just as aware of their child’s unique values and passions as their intellectual gifts.

“People stereotype precocious kids, particularly if they have mathematical talent, by assuming they are going to be a scientist,” said David Lubinski, co-director of the Study of Mathematically Precocious Youth (SMPY) at Vanderbilt’s Peabody College of education and human development. “It’s like saying if you’re tall you’re going to be a basketball player.

“There are a lot of tall kids who don’t want to play basketball. It’s the same with academic talents. We need to really encourage kids to get in touch with not only their gifts, but what they are passionate about,” he said.

Among the talented cohort, 12 percent were deemed eminent in their fields, including Fortune 500 CEOs, full professors at tier-1 research universities, a Pulitzer Prize winner, distinguished judges and lawyers and award-winning journalists.

The researchers found that the participants’ passions, preferences and values, already present and measurable at age 13, when weighted and combined with SAT scores, accurately predicted the types of careers in which they would make their mark.

“Prior research has documented that those with higher ability are more likely to achieve eminence,” Lubinski said. “But this is the first study to show that qualitatively different types of eminence can be predicted as early as age 13, by combining information on the pattern of abilities and interests, across a 35-year time span.”

The participants were originally identified as gifted when scoring within the top 1 percent of intelligence on the SAT at age 13.Thirty-five years later, the Vanderbilt team compared the participants’ career accomplishments to their SAT math and verbal scores, combined with the results from the Study of Values (SOV) questionnaire—a psychological tool designed to measure personal preferences of six types of values: theoretical, economic, aesthetic, social, political and religious.

The researchers found that a little more than 12 percent of the highly successful participants, those who aligned career aspirations with intellect and values, had reached true eminence in three distinct categories:

Not surprisingly, participants who ranked higher in the math/scientific combination of abilities and interests tended to distinguish themselves in STEM fields, and those with top scores in a verbal/humanistic combination were more likely to achieve eminence in the humanities. It was the participants’ preference scores (theoretical, economic, aesthetic, social, political and religious) that provided clues to the specific type of careers they would most likely pursue and achieve eminence, according to Brian O. Bernstein, a National Science Foundation Graduate Research Fellow at Peabody and co-author of the study.

“Let’s say a person scored highly on SAT math, and exhibited strong theoretical values and low religious and social values,” Bernstein said. “They were much more likely to excel in a laboratory setting at a tier-1 research institution. A person similarly gifted in mathematics, but with higher economic and social values would be more likely to pursue an entrepreneurial and people-oriented career, like launching a software company.”

“Each person has a different and unique combination of talents and passions,” said Camilla P. Benbow, co-director of SMPY and the Patricia and Rodes Hart Dean of Education and Human Development at Peabody. “If gifted children’s abilities and preferences at age 13 indicate the types of fields they might ultimately contribute to, it makes sense to help them develop in these fields at an early age if they so choose.”

As part of the study, the researchers conducted a constructive replication with 605 top STEM graduate students. They were similarly assessed at age 25 (shortly after they entered graduate school), and were evaluated again 25 years later. The examination produced the same result and supports the paper’s conclusion.