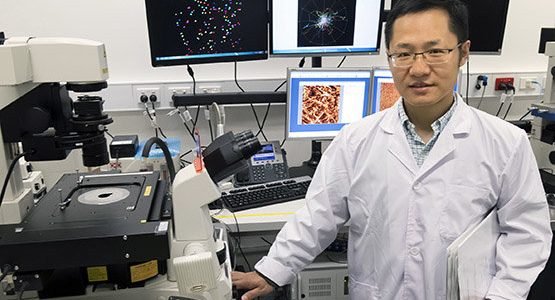 Monash University engineers have unlocked the door to earlier detection of cancer with a world-first study identifying a potential new testing method that could save millions of lives.

Researchers found that a sensor using new, more sensitive materials to look for key markers of disease in the body increased detection by up to 10,000 times.

Associate Professor Qiaoliang Bao from Monash University’s Department of Materials Science and Engineering, along with research colleagues at universities in China, found that antimonene, a 2-D material, has improved sensitivity than graphene in the detection of DNA and MicroRNA molecules related to cancer.

The study, published today in the international science journal Nature Communications, provides a significant advancement in the detection of biomarkers MicroRNA-21 and MicroRNA-155, which are found in many tumours that lead to pancreatic cancer, lung cancer, prostate cancer, colorectal cancer, triple-negative breast cancer and osteosarcoma.

MicroRNA are small molecules which are emerging as ideal non-invasive biomarkers for applications in toxicology, diagnosis and monitoring treatment responses for adverse events. Biomarkers have the potential to predict, diagnose and monitor diseases, like cancer, but are difficult to detect.

“The detection of tumour-specific circulating MicroRNA at an ultrahigh sensitivity is of utmost significance for the early diagnosis and monitoring of cancer,” Associate Professor Bao said.

“Unfortunately, MicroRNA detection remains challenging because they are present at low levels and comprise less than 0.01% of the total RNA mass in a given sample. Therefore, new approaches are urgently needed for clinical disease diagnosis.”

Findings show the new detection limit can reach 10 aM, which is 2.3 – 10,000 times better than existing MicroRNA sensors.

Associate Professor Bao said this world-first study using antimonene materials for clinical advancement constitutes an opportunity for future research into the development of sensors and systems to be used in early cancer diagnosis.

Figures by the Australian Institute of Health and Welfare show that an estimated 141,538 cases of cancer were diagnosed in Australia last year, with that number set to rise to nearly 150,000 by 2020.

“Antimonene has quickly attracted the attention of the scientific community because its physicochemical properties are superior to those of typical 2-D materials like graphene and black phosphorous,” Associate Professor Bao said.

“The combination of antimonene with SPR architecture provides a low-cost and non-destructive improvement in the detection of MicroRNA, which could ultimately help millions of people globally by improving early diagnosis of cancer.”