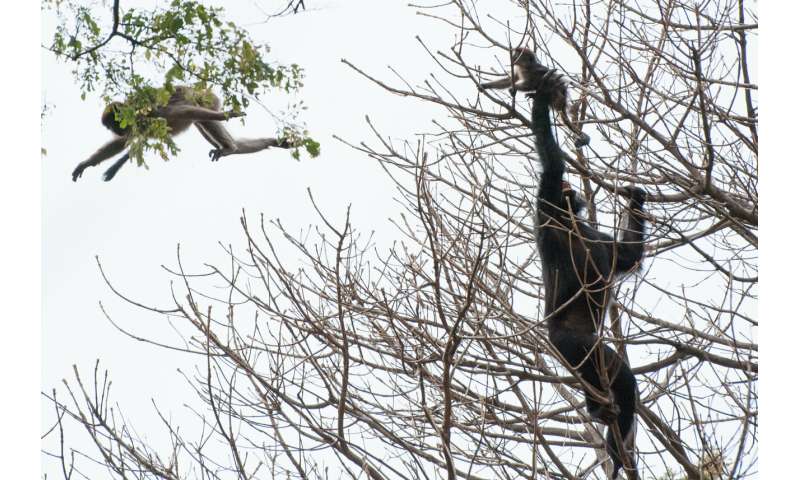 Beatrice H. Hahn, MD, a professor of Medicine and Microbiology in the Perelman School of Medicine at the University of Pennsylvania, and her colleagues have been studying the origin of HIV-1 in non-human primates for decades. They previously discovered that simian immunodeficiency viruses (SIVs) infecting wild-living chimpanzees and gorillas jumped the species barrier into humans on four occasions, one of which spawned the AIDS pandemic. Understanding how these viruses are transmitted within and between species may reveal clues for novel vaccine strategies in humans.

HIV and SIV infect and kill immune cells called CD4 T cells, a process that ultimately leads to AIDS. Publishing this week in the Proceedings of the National Academy of Sciences, Hahn’s lab and an international team of collaborators, found that the CD4 surface protein, which is used by HIV and SIV as the receptor to enter immune cells, is highly variable among wild chimpanzees. Characterizing fecal samples from over 500 chimpanzees across sub-Saharan Africa, they found, to their surprise, nine CD4 variants. They went on to demonstrate that this diversity in CD4 protects chimpanzees from their own strain of SIV, as well as potentially dangerous SIVs carried by other monkey species on which they prey.

SIVs infect over 40 primate species in sub-Saharan Africa and can be deadly. Hahn’s group showed in previous studies that SIV-infected chimpanzees in the wild have a higher mortality than uninfected chimpanzees and can develop an AIDS-like disease, like that in humans.

“CD4 is known to have evolved rapidly in primates, but the reason for this has remained unclear,” said Hahn. “Now we find that mutations in the chimpanzee CD4 reduce susceptibility to SIV infection, which could provide a selective advantage to apes bearing these CD4 variants.”

To get into host cells, HIV and SIV use their outermost, or envelope, glycoprotein to bind to the outermost region of the CD4 receptor. “To counteract this, chimpanzees have evolved several mutations in this CD4 domain that blocks this interaction,” said co-first author Ronnie Russell, a doctoral student in Hahn’s lab.

The team found that these mutations include amino acid changes in contact residues as well as the addition of bulky sugar molecules, called glycans, at the CD4-envelope binding interface. “Glycans on the chimpanzee CD4 clash with glycans on the SIV envelope, which impedes virus entry into the cell,” said co-first author Frederic Bibollet-Ruche, Ph.D., a research assistant professor of Microbiology in Hahn’s lab. This type of glycan-glycan interaction has not been seen before as an anti-viral mechanism.

Unlike chimps, humans lack protective glycans on the virus-binding domain of the CD4 protein. “This may explain our relative susceptibility to SIV cross-species infection, which has occurred at least a dozen times within the last century or so,” said co-author Paul Sharp, Ph.D., an evolutionary biologist at the University of Edinburgh.

Although chimpanzee SIVs are highly divergent from their human counterparts, previous work by the Hahn group showed that they share unexpected antibody cross-reactivity with HIV at the very tip, or apex, of their envelope spike. This finding raised the possibility that HIV and SIV envelopes could be used in combination to focus a protective antibody response to this conserved epitope in a vaccine.