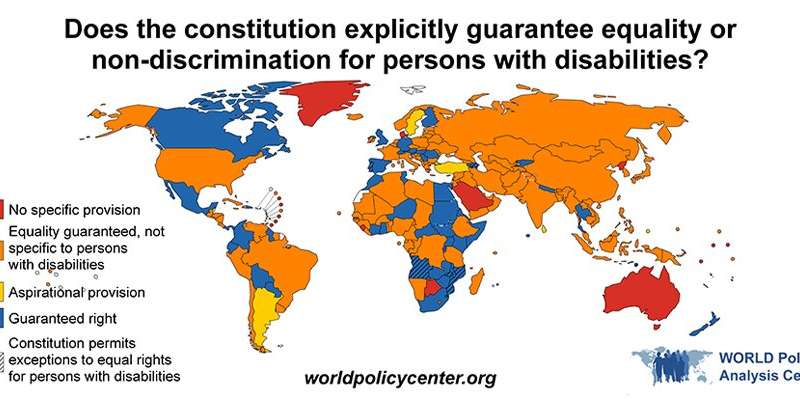 The first comprehensive human rights treaty of the 21st century, the Convention on the Rights of Persons with Disabilities (CRPD) stands as one of the most quickly ratified human rights treaties in history. Globally, according to the United Nations (UN), approximately four billion people are affected by disability policy—including one billion persons with disabilities, one billion who are aging and at high risk of developing a disability, and two billion close family members and caregivers. But, in the 12 years since its adoption in 2006, have countries taken critical steps to realize the transformative promise of the CRPD and guarantee equal rights to all persons with disabilities?

This will be a key question at this week’s 12th Session of the Conference of States Parties to the CRPD, the annual gathering for the 177 countries that have ratified the CRPD, which has become the largest and most diverse international disability meeting in the world.

On June 12 at the UN in New York City, the UCLA Fielding School of Public Health’s WORLD Policy Analysis Center (WORLD) will release the first comprehensive look at laws governing rights to nondiscrimination, inclusion and reasonable accommodations at school and work for all 193 UN member states. These rights are fundamental to fulfilling national commitments to the CRPD as well as other global commitments to education, dignified work and nondiscrimination.

Yet, the WORLD report finds that while many countries have taken important steps to align national laws with the CRPD, others have not yet gone far enough in enacting legislative and constitutional protections in critical areas. As one example, nearly half of all countries do not require employers to guarantee reasonable accommodation to workers with disabilities—leaving more than 160 million persons with disabilities without guarantees to these critical supports. Further, the report finds that guarantees to persons with disabilities lag behind guarantees on the basis of other aspects of identity. Among WORLD’s findings:

“Every child on the planet has the right to fully accessible, quality education and every adult has the right to dignified work without discrimination, but not all countries are fulfilling these rights,” said Dr. Jody Heymann, founding director of the WORLD Policy Analysis Center and a distinguished professor in the UCLA Fielding School of Public Health. “Our analysis shows that the world is further behind in guaranteeing these fundamental human rights to persons with disabilities when compared to other groups. While the global community has made progress, countries must go much further to dismantle barriers to full inclusion for education and work.”

To assess the steps that countries are taking to prohibit disability-based discrimination and guarantee inclusion at school and work, WORLD conducted a comprehensive review of 193 national constitutions and more than 700 articles of legislation and statutory regulations. Key findings from the report include:

A slight majority of countries prohibit discrimination on the basis of disability broadly (62 percent) and/or specifically in hiring (63 percent)—but 26 percent do neither. Guarantees in specific areas of employment vary: