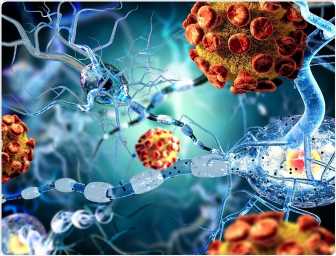 Autoimmune encephalitis (AIE) is a blanket term for a group of diseases, which involve the occurrence of inflammation of the brain caused by autoantibodies that target antigens on the synapses and cell surface antigens of neurons. 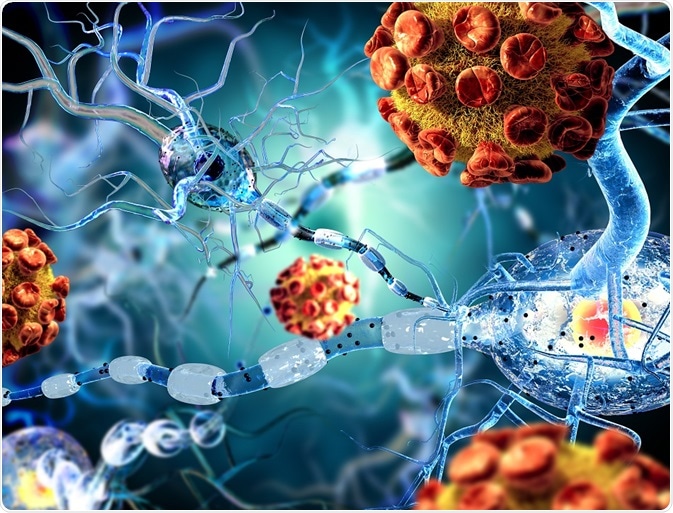 The main areas against which these antibodies are directed include:

Clinical features of AIE are diverse and include psychiatric, autonomic and physical. In most cases there is a subacute or prodromal phase, followed by a gradual and often fluctuating lapse into unconsciousness. Cognitive symptoms such as memory impairments are common and appear early.

Most patients presented with seizures, at 87%. These occurred in different forms, such as:

More than 50% of patients also had fever and symptoms resembling those of flu for a while preceding the actual illness. A similar percentage showed other evidence of brain involvement, such as:

In northern regions encephalitis is somewhat rare at an incidence of about 2-3/100 000 per year. Of these, approximately 20% are due to autoimmune mechanisms, including mostly anti-NMDAR and VGKC-complex antibody-positive encephalitis.

It affects both men and women equally and in all age groups. In 94% of patients with anti-NMDAR encephalitis, an ovarian teratoma was detected, but this also depends upon the race, sex and age. However, AIE caused by cell-surface antibodies is less likely to be due to underlying tumors than those due to onconeural antigens.

Patients were usually negative for viral encephalitis at presentation. Imaging and electroencephalogram (EEG) tests were usually ordered. Diagnosis is by demonstration of the specific polyclonal immunoglobulin G against the subunit concerned. All patients should be screened for a tumor once the presence of AIE is diagnosed. This includes initial imaging and repeated regular screening.

Most patients were treated with immunotherapy, such as:

Others were treated with plasmapheresis (10%).

In most cases the outcome of the AIE depends upon how soon the diagnosis is made, and further management. In many cases the primary diagnosis is psychiatric, and this may therefore delay the recognition of the true nature and etiology of the disease.

Thus, a high level of awareness is needed to ensure that these conditions are known better and included in the list of differential diagnoses to be ruled out before treating a psychiatric symptom as non-organic in origin.

Improvement is the norm if treated appropriately, but mortality may occur at about 7%, mostly in the acute phase, due to autonomic dysfunction and complications of medical management. Some patients experienced spontaneous resolution of the condition following symptomatic treatment, though this was relatively rare, about 5%.

The prognosis was better if the symptoms were less severe, and the patients did not require intensive care. Immediate immunologic treatment and tumor removal as well as the initiation of second-line immunotherapy if first-line treatment failed. Relapses occurred in about 12% and these were repeated in about a third of patients.

Dr. Liji Thomas is an OB-GYN, who graduated from the Government Medical College, University of Calicut, Kerala, in 2001. Liji practiced as a full-time consultant in obstetrics/gynecology in a private hospital for a few years following her graduation. She has counseled hundreds of patients facing issues from pregnancy-related problems and infertility, and has been in charge of over 2,000 deliveries, striving always to achieve a normal delivery rather than operative.