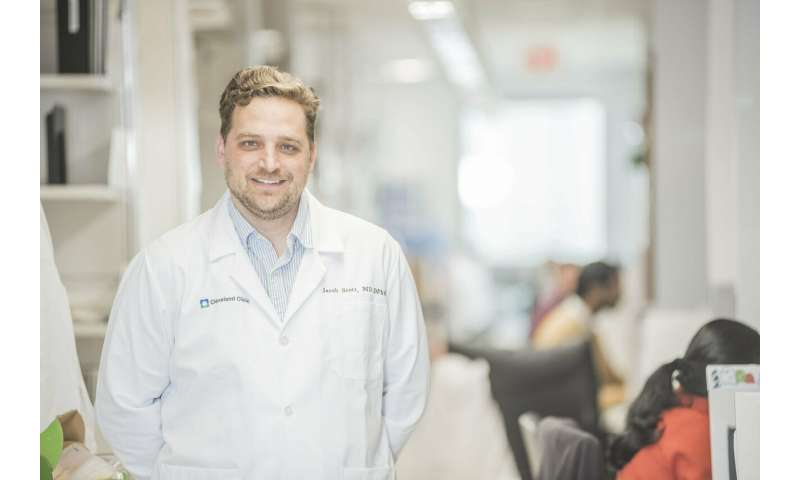 Despite rapid advances in targeted therapies for cancer, tumors commonly develop resistance to treatment. When resistance emerges, tumor cells continue to grow unchecked, despite all attempts to slow cancer progression. While mutations in cancer cells significantly affect drug sensitivity, it is increasingly recognized that ecological interactions between cells can also play a role.

Jacob Scott, MD, DPhil, a physician-scientist at Cleveland Clinic, is interested in learning how cancer cells develop and maintain drug resistance from an eco-evolutionary perspective. He studies the evolutionary strategies that cells employ to survive even in the harshest of conditions. One area of focus of his laboratory is to examine the dynamics of sensitive versus resistant cancer cells and how they affect one another’s growth under the selective pressure of anti-cancer therapies.

“Rather than searching for a ‘silver bullet’ to wipe out all resistant cells, which is unlikely, we are focused on preventing the resistant cells from taking over—from ‘winning’ every time,” Dr. Scott said. “If we can achieve this goal, we can effectively make cancer a chronic condition.”

Up until this point, it had been assumed that drug-resistant cells have a cell autonomous survival advantage over sensitive cells in the presence of therapy. This means that only mechanisms intrinsic to the cell are what promotes its survival. The eco-evolutionary perspective, however, recognizes that cancer cell growth is partially non-cell-autonomous—it depends on both the cell’s own mechanisms but also other cells and factors in the tumor microenvironment. Thus, different cell types can be represented as “strategies” for survival and proliferation, and the effects of their interactions can be summarized as a “game”.

In a paper recently published in Nature Ecology and Evolution, Dr. Scott and his collaborators develop a first-in-class “game assay” which they used to directly quantify and describe the eco-evolutionary interactions between sensitive and resistant tumor cells in an experimental model of non-small cell lung cancer cells sensitive to targeted therapy. This discovery represents a turning point in the growing field of evolutionary therapy, which seeks to harness the dynamics underlying the evolutionary games that cancer cells play. A solid understanding of these games will help fill in gaps in understanding about how to interrupt the natural trajectory of cancer as it develops drug resistance, with the hope of eliminating resistance as a “winning” strategy.

“Our motto is ‘treat the game, not the player’,” said Artem Kaznatcheev, first author on the paper and graduate student in Dr. Scott’s lab. When cancer cells are targeted directly, evolution usually works against the patient. It selects for the emergence of resistant cells which enables the tumor to escape therapy and leads to relapse. To mitigate this risk, Dr. Scott and his team are researching less direct approaches. “We are searching for ways to transform the interactions between cells—i.e. the games they play—so that we can coopt their evolution to better help the patient.”

Using an ALK mutant non-small cell lung cancer model that quickly develops resistance to targeted therapy in vitro, the researchers designed an assay to measure and compare growth rates of cells sensitive and resistant to the drug alectinib when cultured in different scenarios. The team found a switch was flipped in the game governing cancer cell dynamics when drug and tumor-associated fibroblasts were present. In one game (called the “Deadlock” game), resistant cells always “win” and thus expand towards making up the entire tumor. In another situation (called the “Leader” game), both cell types compete with each other and thus co-exist.