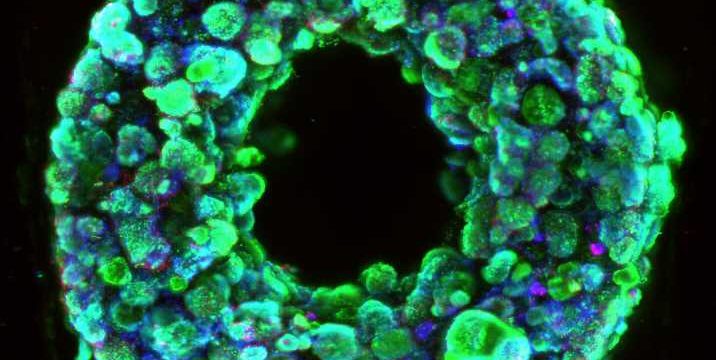 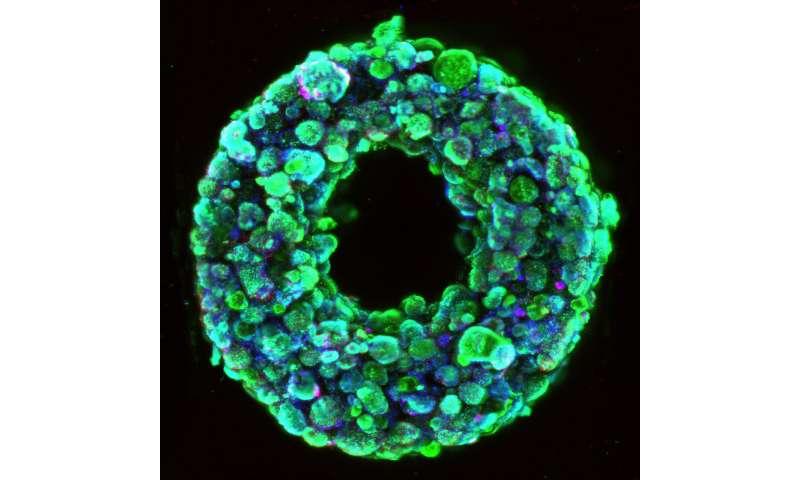 Twenty people die every day waiting for an organ transplant in the United States, and while more than 30,000 transplants are now performed annually, there are over 113,000 patients currently on organ waitlists. Artificially grown human organs are seen by many as the “holy grail” for resolving this organ shortage, and advances in 3-D printing have led to a boom in using that technique to build living tissue constructs in the shape of human organs. However, all 3-D-printed human tissues to date lack the cellular density and organ-level functions required for them to be used in organ repair and replacement.

“This is an entirely new paradigm for tissue fabrication,” said co-first author Mark Skylar-Scott, Ph.D., a Research Associate at the Wyss Institute. “Rather than trying to 3-D-print an entire organ’s worth of cells, SWIFT focuses on only printing the vessels necessary to support a living tissue construct that contains large quantities of OBBs, which may ultimately be used therapeutically to repair and replace human organs with lab-grown versions containing patients’ own cells.”

SWIFT involves a two-step process that begins with forming hundreds of thousands of stem-cell-derived aggregates into a dense, living matrix of OBBs that contains about 200 million cells per milliliter. Next, a vascular network through which oxygen and other nutrients can be delivered to the cells is embedded within the matrix by writing and removing a sacrificial ink. “Forming a dense matrix from these OBBs kills two birds with one stone: not only does it achieve a high cellular density akin to that of human organs, but the matrix’s viscosity also enables printing of a pervasive network of perfusable channels within it to mimic the blood vessels that support human organs,” said co-first author Sébastien Uzel, Ph.D., a Research Associate at the Wyss Institute and SEAS.

The cellular aggregates used in the SWIFT method are derived from adult induced pluripotent stem cells, which are mixed with a tailored extracellular matrix (ECM) solution to make a living matrix that is compacted via centrifugation. At cold temperatures (0-4 C), the dense matrix has the consistency of mayonnaise—soft enough to manipulate without damaging the cells, but thick enough to hold its shape—making it the perfect medium for sacrificial 3-D printing. In this technique, a thin nozzle moves through this matrix depositing a strand of gelatin “ink” that pushes cells out of the way without damaging them. 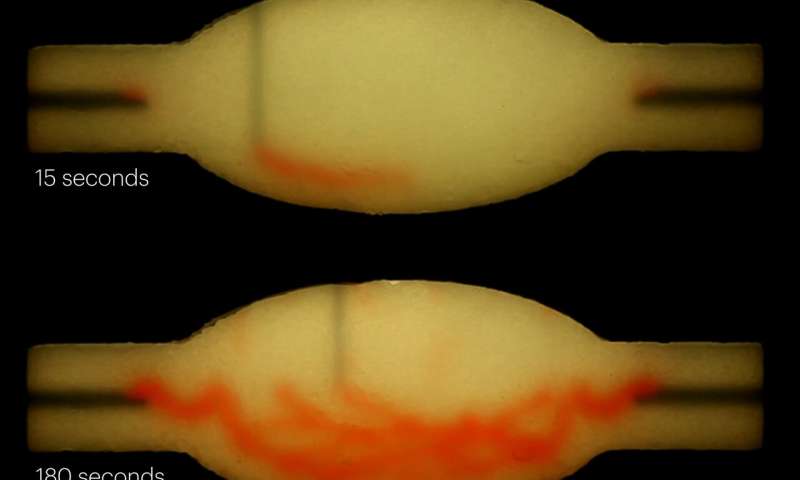 When the cold matrix is heated to 37 C, it stiffens to become more solid (like an omelet being cooked) while the gelatin ink melts and can be washed out, leaving behind a network of channels embedded within the tissue construct that can be perfused with oxygenated media to nourish the cells. The researchers were able to vary the diameter of the channels from 400 micrometers to 1 millimeter, and seamlessly connected them to form branching vascular networks within the tissues.

Organ-specific tissues that were printed with embedded vascular channels using SWIFT and perfused in this manner remained viable, while tissues grown without these channels experienced cell death in their cores within 12 hours. To see whether the tissues displayed organ-specific functions, the team printed, evacuated, and perfused a branching channel architecture into a matrix consisting of heart-derived cells and flowed media through the channels for over a week. During that time, the cardiac OBBs fused together to form a more solid cardiac tissue whose contractions became more synchronous and over 20 times stronger, mimicking key features of a human heart.

“Our SWIFT biomanufacturing method is highly effective at creating organ-specific tissues at scale from OBBs ranging from aggregates of primary cells to stem-cell-derived organoids,” said corresponding author Jennifer Lewis, Sc.D., who is a Core Faculty Member at the Wyss Institute as well as the Hansjörg Wyss Professor of Biologically Inspired Engineering at SEAS. “By integrating recent advances from stem-cell researchers with the bioprinting methods developed by my lab, we believe SWIFT will greatly advance the field of organ engineering around the world.”

Collaborations are underway with Wyss Institute faculty members Chris Chen, M.D., Ph.D. at Boston University and Sangeeta Bhatia, M.D., Ph.D., at MIT to implant these tissues into animal models and explore their host integration, as part of the 3-D Organ Engineering Initiative co-led by Lewis and Chris Chen.