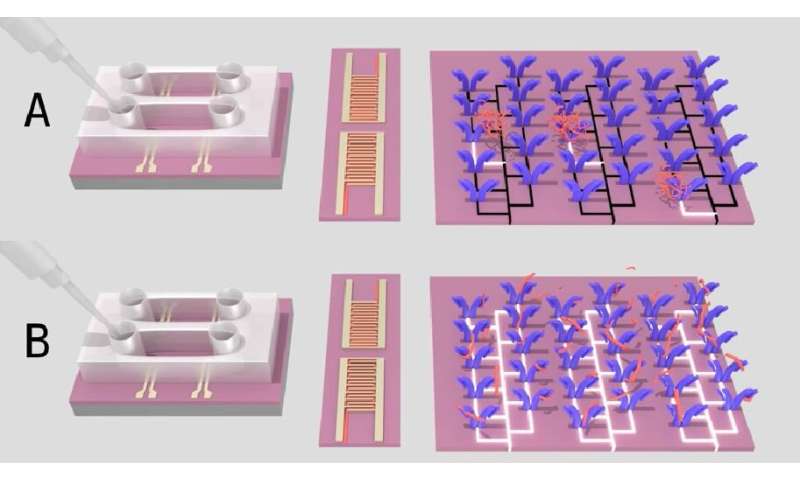 A large team of researchers affiliated with a host of institutions across South Korea has developed a possible blood test to detect the early stages of Alzheimer’s disease in patients who have yet to exhibit symptoms. In their paper published in the journal Science Advances, the group describes their research and the technique they developed for detecting the disorder.

Alzheimer’s disease is, of course, a progressive disorder that involves neuronal deterioration in the brain, leading to a variety of symptoms, most notably memory loss. It is not curable and those afflicted eventually die.

Scientists have been studying Alzheimer’s disease for many years, and have learned that one of the things that happens in the brains of such patients is the buildup of an amyloid-beta (Aβ) peptide. While research into possible cures continues, a lot of effort is also being put into finding a test for the disorder before symptoms arise. Prior research has shown that Aβ is able to move from the brain into the bloodstream, suggesting that a blood test might be developed as a way to test for the disorder. Unfortunately, that idea has not panned out, as there is no way to determine if Aβ levels in the blood actually show that Alzheimer’s disease has begun. In this new effort, the researchers believe they have found a way to alter Aβ found in blood samples to reveal the presence of Aβ.

The researchers found that if a small molecule known as EPPS was added to a solution holding Aβ concentrations, the molecule would force them apart. That led them to the idea of testing the broken samples from patients diagnosed with the disorder against control groups to see if there were differences.