Women have higher cholesterol after menopause, but we still don't really know why. 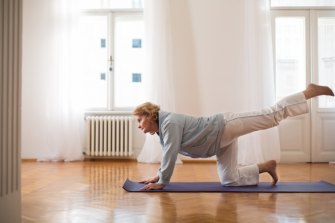 On average, women after menopause have high levels of bad cholesterol.Credit:Stocksy

"We wanted to know: when we say that is cholesterol higher, how much higher is it?" said lead researcher Ananthan Ambikairajah from ANU's Centre for Research on Ageing, Health and Wellbeing.

According to the Heart Foundation, more than three million Australian women have high cholesterol, placing them at greater risk of heart attack or stroke.

Mr Ambikairajah said the results were a "cause for concern" for women who are otherwise at risk of cardiovascular disease.

"If they have two or more cross-strings of symptoms such as low levels of physical activity or obesity, then it can become a major issue," he said. "But for people who are healthy already, it is probably no greater risk."

Although the research found an association between age and higher cholesterol, Mr Ambikairajah said more research needed to be done to determine if other factors – such as hormonal changes, lifestyle factors and genetics – played a role.

Professor Bronwyn Stuckey, clinical professor at the University of Western Australia's School of Medicine and Pharmacology and past-president of the Australian Menopause Society, said it is "often difficult to tease out" which changes over the menstrual period are attributable to ageing and which are caused by other changes, notably declining oestrogen levels.

"The 'bad' cholesterol LDL goes up as a result of falling oestrogen," she said, noting that cardiovascular disease is "the most dangerous enemy" for women after menopause.

"The triglycerides [a type of fat found in the blood] go up, probably because of a change in fat distribution … and a subsequent unfavourable change in insulin sensitivity. All in all [it is] not a favourable set of changes for cardiovascular risk."

Cia Connell, clinical manager at the Heart Foundation, said it is currently understood that cholesterol levels vary from person to person and may be linked to family history and other risk factors such as whether they smoke, have high blood pressure, or are overweight.

"Most people with high cholesterol levels don’t know they have it, because they don’t experience any symptoms," she said. Survey data released by the Heart Foundation last year found only 10 per cent of women were aware high cholesterol is a risk factor for heart disease.

Ms Connell recommended women pay attention their diet and lifestyle in the lead up to menopause, swapping unhealthy saturated fats with healthier fats and increasing their physical activity to at least 30 minutes a day to reduce their risk of high cholesterol and heart disease

"When it comes to eating, the big picture matters – and that is, the combination of healthy foods and how regularly you eat them. Eating more plant-based foods like vegetables, fruit and wholegrains, and healthy proteins like fish and seafood with smaller amounts of animal-based foods, while cutting down on highly processed junk foods, is the key to good heart health."