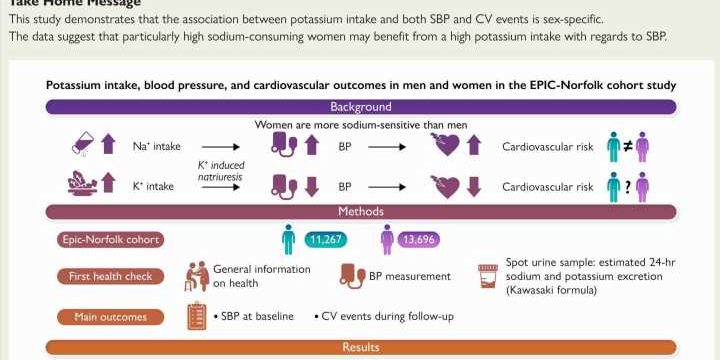 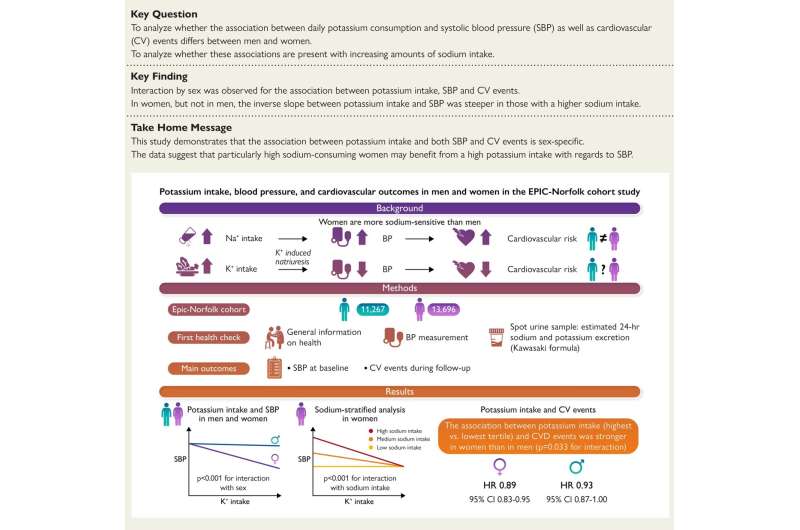 Women who eat bananas, avocados and salmon could reduce the negative effects of salt in the diet, according to a study published today in the European Heart Journal, a journal of the European Society of Cardiology (ESC). The study found that potassium-rich diets were associated with lower blood pressure, particularly in women with high salt intake.

“It is well known that high salt consumption is associated with elevated blood pressure and a raised risk of heart attacks and strokes,” said study author Professor Liffert Vogt of Amsterdam University Medical Centers, the Netherlands. “Health advice has focused on limiting salt intake but this is difficult to achieve when our diets include processed foods. Potassium helps the body excrete more sodium in the urine. In our study, dietary potassium was linked with the greatest health gains in women.”

The study included 24,963 participants (11,267 men and 13,696 women) of the EPIC-Norfolk study, which recruited 40- to 79-year-olds from general practices in Norfolk, U.K., between 1993 and 1997. The average age was 59 years for men and 58 years for women. Participants completed a questionnaire on lifestyle habits, blood pressure was measured, and a urine sample was collected. Urinary sodium and potassium were used to estimate dietary intake. Participants were divided into tertiles according to sodium intake (low/medium/high) and potassium intake (low/medium/high).

During a median follow-up of 19.5 years, 13,596 (55%) participants were hospitalized or died due to cardiovascular disease. The researchers analyzed the association between potassium intake and cardiovascular events after adjusting for age, sex, body mass index, sodium intake, use of lipid lowering drugs, smoking, alcohol intake, diabetes and prior heart attack or stroke. In the overall cohort, people in the highest tertile of potassium intake had a 13% lower risk of cardiovascular events compared to those in the lowest tertile. When men and women were analyzed separately, the corresponding risk reductions were 7% and 11%, respectively. The amount of salt in the diet did not influence the relationship between potassium and cardiovascular events in men or women.

Professor Vogt said: “The results suggest that potassium helps preserve heart health, but that women benefit more than men. The relationship between potassium and cardiovascular events was the same regardless of salt intake, suggesting that potassium has other ways of protecting the heart on top of increasing sodium excretion.”

The World Health Organization recommends that adults consume at least 3.5 grams of potassium and less than 2 grams of sodium (5 grams of salt) per day. High potassium foods include vegetables, fruit, nuts, beans, dairy products and fish. For example, a 115 gram banana has 375 mg of potassium, 154 grams of cooked salmon has 780 mg, a 136 gram potato has 500 mg, and 1 cup of milk has 375 mg.