A woman had to go to hospital four times after she swallowed still-packaged prescription pills the middle of the night and forgot about it.

In the bizarre case, it took doctors more than two weeks to find the ‘fit and well’ woman had an entire plastic and foil packet lodged in her throat.

Suffering from discomfort and having difficulty swallowing, the unnamed woman, in her 40s and from Northern Ireland, went to A&E.

Doctors were baffled when X-rays and other examinations showed nothing in her oesophagus but she kept returning during a ‘frightening three weeks’. 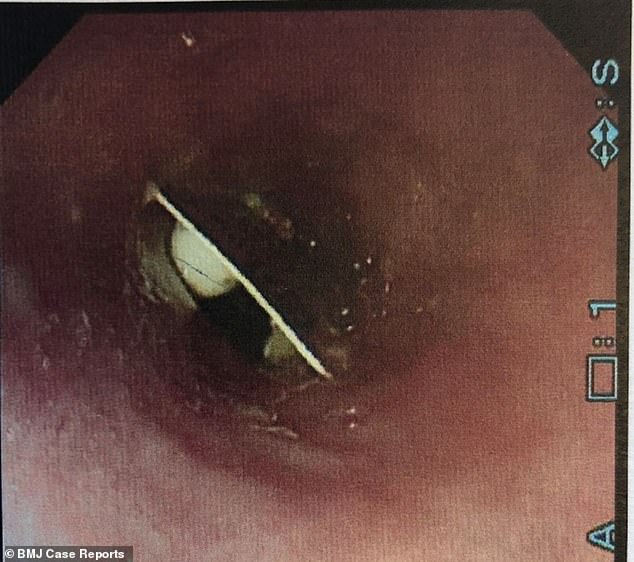 The packet, which the Northern-Irish woman claimed to have swallowed in her sleep and forgotten about, was lodged in her throat for more than two weeks before doctors managed to find it using a camera fed in through her mouth (pictured, an image from the camera)

After repeated tests and overnight stays in hospital, the packet was finally discovered and taken out after 17 days.

The patient claimed she had taken the tramadol painkillers – only available on prescription – in the middle of the night.

But she had no recollection of swallowing the entire plastic packet along with them.

‘I had no idea I swallowed this!’ she said in the journal BMJ Case Reports. ‘It was a very frightening three weeks and I couldn’t believe when I saw the picture.’

Although the chunk of plastic was stuck in her throat for more than two weeks, the woman was still able to swallow food and water and breathe normally.

When doctors examined her originally she also had no problems moving her neck, and nothing unusual showed up in X-rays.

Following the first visit to A&E, doctors believed she had injured her throat while swallowing tablets normally, so told her to come back if there was no improvement in two days.

Three days after that, she was admitted to hospital and spent two days on a ward being treated with steroids and painkillers.

Five days after that she had a barium swallow test, in which a patient swallows a liquid containing metal which can be seen on X-rays and shows up problems in the digestive tract.

But this still did not give any clues to what might be causing the woman such trouble.

Only after another five days did doctors send a camera down the patient’s throat and discover the true and peculiar root of the problem.

‘She had swallowed her tramadol tablets whole in the original foil packet which was lodged in the upper oesophagus,’ Dr David McCrory wrote in the case report.

‘She underwent rigid oesophagoscopy and removal of foreign body uneventfully (17 days after ingestion of her tablets!) and she was discharged after a period of observation.’

Dr McCrory added having a foreign object lodged in the throat ‘carries a significant risk’ or illness or death because it can damage the tissue.

And he suggested the barium swallow technique may not be accurate enough to check for objects in people’s throats, recommending CT scans instead.

The unnamed 72-year-old swallowed the casing of her allergy tablets two weeks before seeking medical help.

Surgeons were forced to remove 30cm of her bowel, after scans showed the sharp edges had pinched holes in her organ.

Blister pill packs, commonly used by drug firms, are usually presented in a plastic shell enclosed by an aluminium sheet. 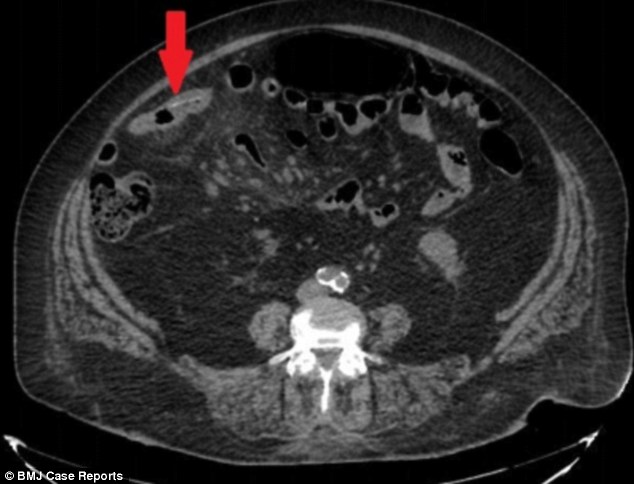 The 72-year-old, who wasn’t named, had swallowed the casing of her allergy tablets two weeks prior to seeking medical help

Once divided, portions have sharp edges that ‘constitute a risk object if swallowed’, doctors wrote in the BMJ Case Reports.

The morbidly obese woman, who had a BMI of 46 (almost double what is normal), told medics she battled the discomfort for around 15 days.

Doctors conducted several tests before choosing to send the woman for a CT scan, to examine her abdomen. They then sent her for surgery to remove part of her ileum – the final section of the bowel.