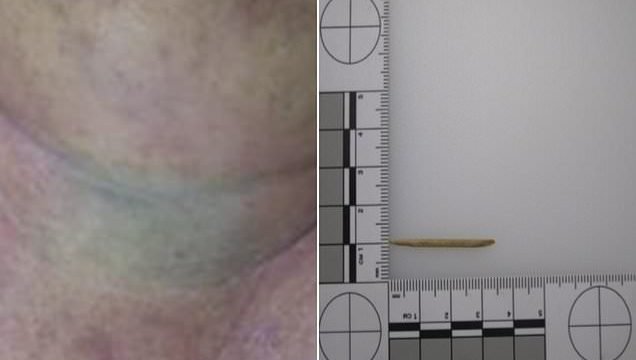 Woman, 50, died after a TOOTHPICK got stuck in her throat while she ate bread and salami as doctors reveal her boyfriend was initially wrongly accused of her murder

A man was suspected of murdering his girlfriend until a post-mortem discovered a toothpick had punctured her throat.

Doctors had dismissed the unnamed woman as having a cold when she had visited complaining of something jammed in her throat after eating bread and salami.

The 50-year-old, who lived in Coimbra, Portugal, had even been sent for psychiatric testing in case the pain was ‘all in her head’.

Just a day after being given antibiotics for her suspected cold, she was found dead in the bathroom of her and her six-year partner’s home. Her pyjamas were soaked with blood and a wound to her head.

After the family threw around accusations of foul pay, doctors concluded that a toothpick had caused inflammation and the heart to stop. 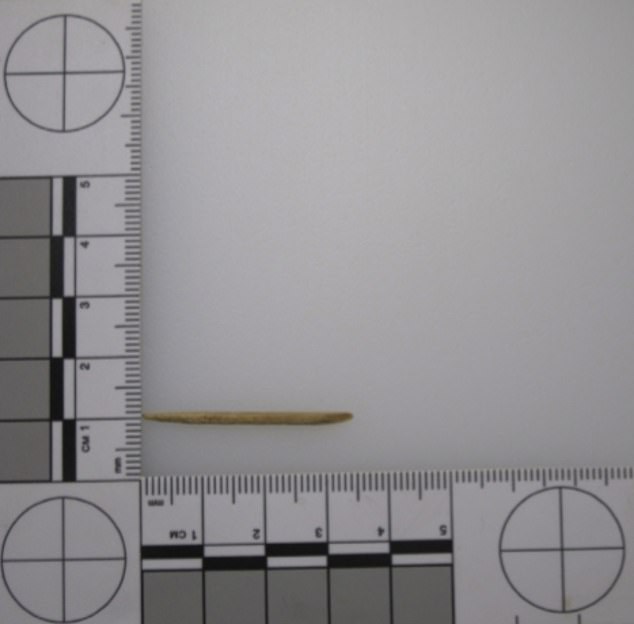 A 3.5 centimetre (1.3inch) wooden tooth pick fragment was found which punctured the woman’s throat and interfered with vital nerves – causing the heart to stop 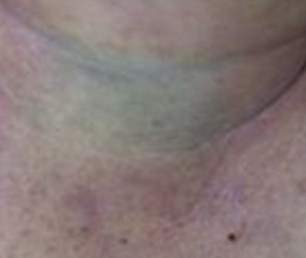 A man was suspected of murdering his 50-year-old girlfriend, from Portugal, until a post mortem investigated green colouring on her neck and discovered a toothpick

During an autopsy, the pathologists noticed the woman had a green colour on the skin around her neck.

After opening up the throat, a 3.5cm wooden tooth pick fragment was found covered in pus alongside two puncture wounds in her throat wall.

Dr César Lares do Santos, a pathologist at the National Institute of Legal Medicine and Forensic Sciences in Portugal, released the report in the Journal of Forensic and Legal Medicine.

She visited the casualty unit of her local hospital twice but X-rays and a closer examination of her throat hadn’t found any significant results.

Dr Lares do Santos said: ‘Due to the victim’s medical history, she was evaluated by a psychiatrist.’

The woman had suffered with a psychiatric disorder after becoming a widow in the past.

Dr Lares do Santos suggested the doctor probably thought the woman had globus pharingeus, the sensation of feeling a lump in the throat.

But after the psychiatrist found the woman to be mentally stable, she was diagnosed with a common cold.

The woman was told to return to the doctor if her symptoms didn’t clear up. But a day later, she was dead.

PROFESSIONAL ATHLETE NEARLY BLEEDS TO DEATH AFTER SWALLOWING A TOOTHPICK

A professional athlete nearly died when he swallowed a toothpick and it became lodged in his intestine and punctured an artery.

The 18-year-old in Boston, Massachusetts, lived with the 7.5cm (three inches) long wooden spike in his internal organs for three weeks before doctors found it.

While travelling to train with his team the man went to hospital after developing pain in his stomach and back, a fever, nausea and diarrhoea with blood in it.

Medics couldn’t find anything the first time he went to a hospital, but 20 days later they discovered the toothpick which, when removed, triggered ‘life-threatening bleeding’.

He had pain in his back and side, lost his appetite and repeatedly found blood in his faeces, according to the report in the New England Journal of Medicine.

She had been watching television with her partner when she went to the bathroom only to be found sometime later, face down, unconscious, her pyjamas soaked with blood and with a wound to her head.

Dr Lares do Santos said: ‘Sudden, unexpected or of unknown cause deaths, especially when blood is found at the scene, may give rise to unfounded early speculation.’

The inflammation caused by the toothpick interfered with nerves vital in the control of the brain, heart and lungs, leading to a cardiovascular collapse, the pathologists claimed.

Her injuries would have been due to hitting her head on the bathroom floor, and those on her nose could have been from the glasses she was wearing.

Dr Lares do Santos said: ‘Traumatic lesions to the oesophagus are relatively uncommon in adults.’

Although there are a few cases of toothpicks being swallowed, none, to the team’s knowledge, has resulted in a puncture to the throat.

One study identified 136 cases of ingestion, with 9.6 per cent rate of mortality.

The team said that the toothpick had not been picked up by an X-ray because even coins can be missed, and that it wasn’t in an obvious place to be seen during a laryngoscopy – a procedure to look at the back of the throat.

Therefore, they said: ‘This case is also a very important reminder for clinical practitioners.

‘Second, to avoid diagnostic biases such as those related to psychiatric disorders.’