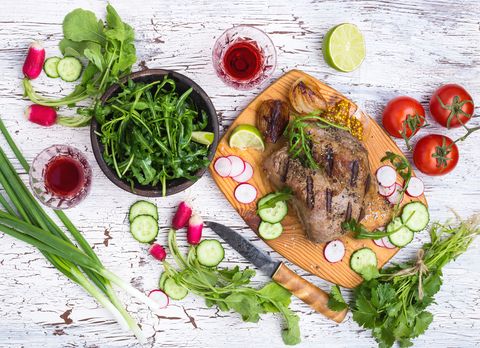 Is this the diet where I have to subsist on only meat and berries?

This is like the ultra-low-carb diet of pain, isn’t it?

Must I wear a loin cloth?

You’re about to learn the answers to the first two, and more. The last one is on you, buddy.

What is the Paleo Diet?

The Paleo Diet focuses on a high-protein, low-carb plan, which emphasizes eating meat, fruits, and vegetables—basically, anything available to your Paleolithic ancestors 10,000 years ago.

Go Paleo and you’ll have to cut out processed foods (primitives didn’t have microwaves for frozen pizza), which probably isn’t a surprise to you.

What will likely shock you is that people on the Paleo Diet shouldn’t eat grains, legumes, dairy, potatoes, refined vegetable oils, and salt.

Although, you can put sabertooth tiger back on the menu, har har.

And you can do the same for grass-fed beef, seafood, fresh fruits and vegetables, eggs, nuts, and seeds. Specific oils including, coconut, avocado, and olive, are also Paleo-friendly.

A typical Paleo dinner could include grilled chicken with steamed vegetables and fruit for dessert.

What are the side effects of Paleo?

People commonly complain about feeling lethargic and experiencing headaches and sore muscles after embarking on low-carb diets. Commonly called “carb flu,” or keto flu for those on ketogenic diets, the reason for these symptoms remain a mystery.

“Metabolically I’m not quite sure what causes it,” Teresa Fung, a professor at Simmons College and a clinical nutritionist, explained to Popular Science. “But usually when people have a big change in their diet their body needs some time to adjust.”

Generally, you may feel better within a few weeks after starting the diet.

The Paleo Diet, devoid of dairy, also may cause calcium and vitamin D deficiencies, as Roger Adams, Ph.D. and founder of Eat Right Fitness, previously explained to Men’s Health.

Long-term deficiencies in these two key nutrients could weaken your bones. That said, you can still derive calcium from dark leafy greens and vitamin D from eggs and seafood, both of which you can eat on the Paleo Diet.

Oh, and just so you know, low-carb diets can also lead to constipation, due to the decrease in fiber found in whole grains. Fun!

Is Paleo good for weight loss?

Yes, some studies indicate that participants on a Paleo diet may have lost weight, but it’s not because of anything special within the diet. It’s simply because they ate fewer calories overall. Studies have shown that Paleo is ineffective in long-term weight loss. In fact, a study published in JAMA from February 2018 concluded that low-carb diets were not any better than low-fat diets in keeping the weight off.

Kizer does believe Paleo can be beneficial in certain ways.

“My favorite thing about Paleo is its emphasis on real food,” she says. “Most people who are doing Paleo are grocery shopping and cooking.” But you don’t need to go Paleo in order to take more control of what you eat.

That said, she wouldn’t exactly recommend the diet. “I still think Paleo can be too restrictive,” she says. Years worth of research has shown that whole grains can lower your risk of heart disease, yet they’re not allowed on Paleo. Legumes are a great plant-based source of protein and fiber, yet they’re also a “banned” food.

So, what is the best way to lose weight?

Numerous studies have shown that short-term diets don’t have lasting results. In fact, in 2007, researchers from UCLA found that five-years post diet, one-third to two-thirds of people gained more weight than they lost when they were on the diet.

“This is the problem I have with all of these fad diets,” explained Andy Yurechko, M.S., R.D., of Augusta University Medical Center in Georgia. “They’re not really sustainable.”

“A healthier type of diet is something you can do every day of your life,” he says.