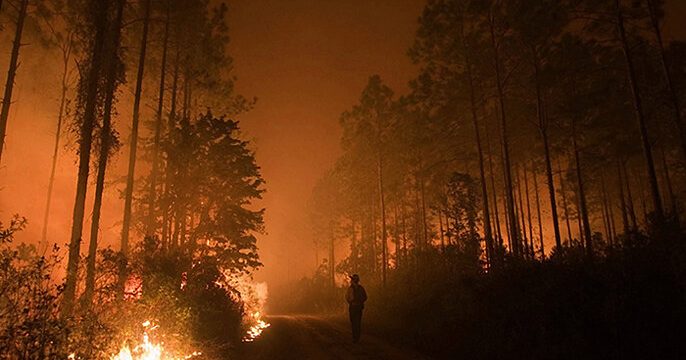 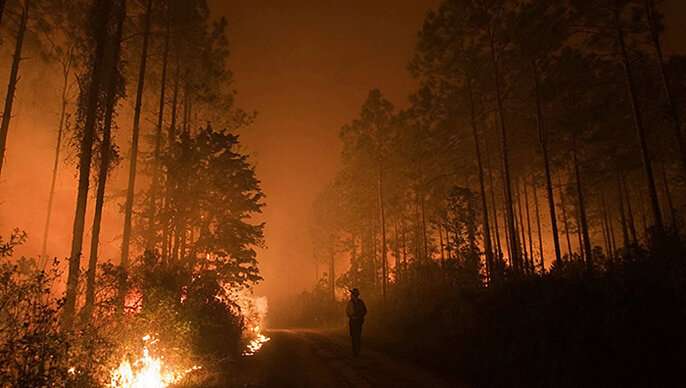 California, home of the freeway and the car-based lifestyle, has long struggled with air pollution—and been a pioneer in cleaning up the air, for example in vehicle emission standards. But in recent years, a new threat to air quality has emerged as summer and fall bring some of the worst wildfires in state history, spreading smoke and haze over hundreds of miles.

“I didn’t anticipate it, and I don’t see an end to it,” said professor Anthony Wexler, director of the UC Davis Air Quality Research Center, who has studied air quality issues for over 30 years.

UC Davis has a long history of research in air pollution and health. For example, in the 1970s, professor Thomas Cahill and colleagues showed how lead pollution spread from freeways over neighborhoods, leading then-Gov. Jerry Brown to introduce the first controls on lead as a gasoline additive. Now researchers across the campus are looking at the threat to health from wildfire smoke.

Smoke gets in your eyes (and lungs)

Smoke is made up of tiny, mostly carbon-based particles, said Kent Pinkerton, director of the UC Davis Center for Health and Environment and a professor with appointments in the School of Veterinary Medicine and School of Medicine.

The size of these particles is critical, Pinkerton said. Those that are 2.5 micrometers or smaller in size—known as PM2.5—can enter deep into the airways and alveoli of the lung. There particles may be trapped in mucus or consumed by protective cells called macrophages, and the debris is coughed up or swallowed. But some particles may make their way from the lung to other organ systems.

Smoke may also contain compounds such as dioxins or phthalates, formed from burning plastic or other materials from burning houses. These compounds may be present both as particles and in some cases as gases. Professor Qi Zhang, in the Department of Environmental Toxicology, found enhanced levels of phthalates in Davis air during the 2018 Camp Fire.

“The greatest health effect depends on the size of the particles and the concentration,” Pinkerton said. “They can be present for a long time, over long distances.”

Acute symptoms of smoke exposure include irritation of the eyes and throat, coughing and sneezing, chest tightness and wheezing. They can also include rapid or irregular heartbeat and excessive fatigue.

These symptoms typically pass when the smoke leaves. But growing evidence shows that effects can linger or lead to persistent health problems.

In June 2008, smoke from wildfires spread over the Davis area. Levels of PM2.5 at the UC Davis campus reached as high as 80 micrograms per cubic meter, well above federal standards.

It was just past birthing season for rhesus macaques living in outdoor corrals at the California National Primate Research Center. With funding from the California Air Resources Board, professor Lisa Miller, a researcher at the center and at the School of Veterinary Medicine, began a long-term study of the effects of that natural smoke exposure on the lungs of monkeys that were two to three months old at the time.

Over the years, Miller has found that compared to monkeys born the following year and not exposed to smoke, the animals show impacts to their immune systems and lung functions, with similarities to the human lung disease Chronic Obstructive Pulmonary Disorder, or COPD.

Fall 2018 brought a second natural experiment at the center. Smoke from the Camp Fire 100 miles away covered the Davis campus, this time at the peak of breeding season for rhesus macaques. Bryn Willson, an OB/GYN resident at UC Davis Health, with Pinkerton and Professor Emeritus Bill Lasley, followed female macaques of reproductive age who were naturally exposed to smoke early in pregnancy. They found an elevated risk of miscarriage: 82 percent of pregnancies resulted in successful live births, compared to 86 to 93 percent in the previous nine years.

Respiratory illness is a major focus for the CNPRC. Center researchers developed the first rhesus monkey model of adult and childhood asthma using a human allergen, dust mite. This has given researchers the ability to test biological mechanisms and new therapies. The Respiratory Disease Unit, led by Miller, is continuing research on smoke exposure in both rodent and non-human primate models, including developing a combustion facility to generate smoke for laboratory experiments.

Following the Sonoma and Napa fires of 2017, Irva Hertz-Picciotto, professor of public health sciences and director of the UC Davis Environmental Health Sciences Center, began surveying the health of people affected by wildfires. Her colleague Rebecca J. Schmidt, assistant professor of public health sciences, initiated the B-SAFE, Bio-Specimen Assessment of Fire Effects, study following a group of women who were exposed to wildfire smoke in 2017 while pregnant or just before becoming pregnant, and their babies. In February 2021, Hertz-Picciotto presented some of her work at a congressional briefing.

“There’s still a view that the effects of poor air quality are transient, but what we’re seeing indicates that effects are persisting for many months after fires—and then you’re back into fire season,” she said.

Repeated exposure to poor air quality from wildfire smoke may lower the threshold for symptoms to appear, Hertz-Picciotto said.

“It may take less of a trigger to get symptoms,” she said.

California fire season also coincides with the onset of seasonal influenza and other winter viruses, as well as COVID-19. There may be interaction between the effects of smoke and viruses that worsen lung problems. Several studies suggest exposure to wildfire smoke increased risks for COVID-19 infection, Hertz-Picciotto said.

Among those of greatest concern for health researchers are children, and adults who work outdoors, such as agricultural workers.

“Children are very active outdoors, they are taking in more air compared to their lung mass than adults, and they are especially sensitive to wildfire smoke,” Pinkerton said. “Their immune system is still maturing.”

Pinkerton is also director of the Western Center for Agricultural Health and Safety at UC Davis.

“Just a few years ago, there were no plans or guidelines dealing with air quality for outdoor workers,” he said. The first California state regulations went into effect in 2018. The WCAHS has worked with both farmers and farmworker organizations to produce training materials and checklists to implement the regulations.

Assistant professor Kathryn Conlon, a public health scientist in the School of Medicine and School of Veterinary Medicine, is studying how California’s state regulations on air quality and mask use for agricultural workers translate into the fields. For example, regulations require that workers be issued with N95 masks when the Air Quality Index exceeds 150.

But there is a gap between instituting a policy and its adoption, Conlon said. For example, workers will often already wear a cloth mask or bandana as a dust shield. N95 masks require proper fitting and may be uncomfortable when doing hard manual work outdoors in hot weather.

“We want to understand the perceptions of agricultural workers around airway protection in a smoke event,” Conlon said. “What precautions are they already taking on their own? What is being supplied by the employer?”

A pilot study in collaboration with farmworker organizations revealed confusion about the protectiveness of different types of face coverings, she said.

Wildfire smoke might also carry mold spores from forest soils over long distances. In 2020 Naomi Hauser, an infectious disease specialist and assistant clinical professor at UC Davis Health, and colleagues noticed an apparent uptick in mold infections, especially in burn patients. When they reviewed the data for the previous three years, they found twice as many mold infections in 2020, seeming to coincide with fire season.

“These are environmental molds found in soil, that can be carried around in dust,” said Hauser who is also a member of the UC Davis Climate Adaptation Research Center. The winds generated by large fires could sweep mold spores high in the air and spread them over long distances.

The study of living things in smoke is very new—Leda Kobziar, a fire ecologist at the University of Idaho in Moscow, coined the term “pyroaerobiology” in 2018.

Because mold spores are relatively large, about 40 micrometers, they likely fall out of the air more quickly than PM2.5 and ultrafine particles and do not travel as far. When they settle out on people with damaged skin, such as burn victims or are inhaled by people with weakened immunity they may cause infections.

“Most of us, with intact skin and healthy immune systems, would be okay, but if you are immunocompromised or have a burn it’s something to think about,” Hauser said. Hauser and colleagues plan further studies of these infections.

Climate change brings compounding risks, Conlon said: Heat, drought, wildfires and air quality pose their own risks and may multiply each other.

“Everyone is exposed to these risks, but some people more than others,” Conlon said. “If I’m doing sedentary work in an air-conditioned office with filtered air, I’m less exposed to heat and poor air than if I’m doing hard manual work outdoors.”

Addressing these challenges requires working on many problems at once. To mitigate the health impacts of wildfires, we need to meet the health needs of all those impacted.

‘Waking Up to Wildfires’