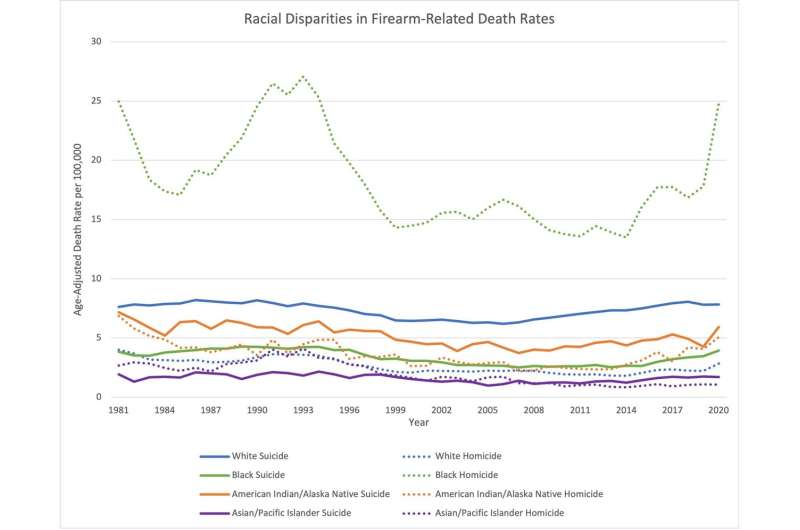 A new analysis of firearm death rates from 1981 to 2020 shows that the people most heavily impacted by firearm deaths were Black men and white men, and that rates of firearm-related homicides and suicides jumped between 2019 and 2020.

Lindsay Young of the University of Cincinnati College of Medicine, Ohio, and Henry Xiang of Nationwide Children’s Hospital, Ohio, present these findings in the open-access journal PLOS ONE on December 14, 2022.

In the U.S., firearms are involved in 60% of suicides and 36% of homicides. Understanding historic trends and disparities in firearm death rates is necessary to inform efforts to reduce deaths. However, most previous research on firearm death trends has focused on relatively short timelines or considered homicide or suicide alone.

To gain new insights into firearm death trends, Young and Xiang analyzed U.S. firearm death rate data collected between 1981 and 2020, comparing rates between racial groups and sexes. They sourced the data from the Centers for Disease Control and Prevention (CDC)’s WISQARS database for fatal injury and violence.

Between 2011 and 2020, minority populations were most heavily impacted by homicide and suicide in terms of years of potential life lost before age 75—a measure reflecting premature death.

These findings suggest that efforts to prevent firearm suicides and homicides should account for the demographics of people most impacted. The researchers also note that their study highlights the urgency of such efforts and that dismantling structural racism in the U.S. is necessary to address the disparities they found.

The authors note that “over the past four decades, firearm injuries disproportionally affect[ed] certain demographic groups in US society,” and add, “the United States must treat violence and firearm-related injuries as [a] national health priority.”