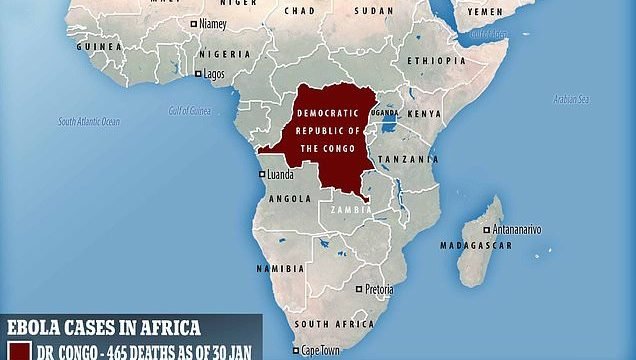 Two soldiers have died from Ebola as the outbreak rages on in the Democratic Republic of Congo (DRC).

Some 465 people have now passed away as a result of the deadly virus in the nation’s second worst ever outbreak, according to figures released yesterday.

A further three soldiers in the country’s army are under observation, as the number of probable cases reaches 752.

But officials insist precautions have been put in place to ensure troops do not fall down with the fatal disease. 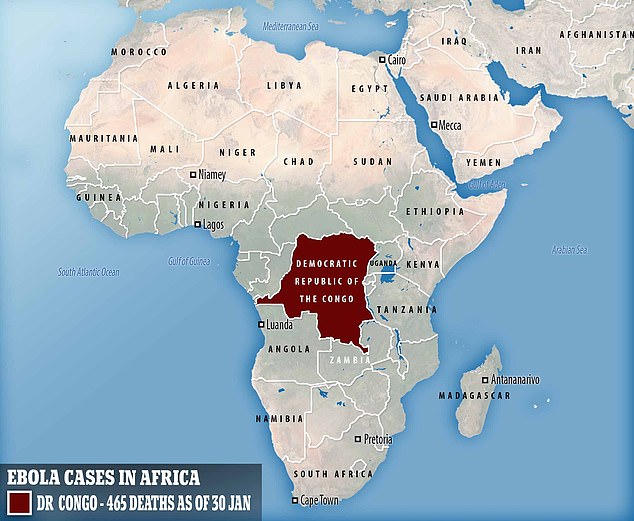 Some 465 people have now died in the second worst outbreak, as of figures from Wednesday 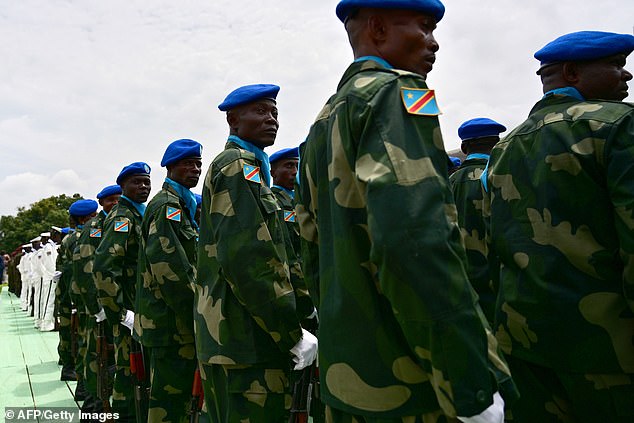 Two soldiers have been confirmed to have died of Ebola, with a further three under observation. Pictured are DRC soldiers on January 24 this year in the capital city Kinshasa

Major Mak Hazukay – an army spokesperson – told AFP: ‘Two of our soldiers have died from the Ebola virus in Beni. Three others are under observation.

‘All measures have been taken to stop the troops from being contaminated.’

Dr Michel Tosalisa, who is in charge of the affected Beni region, confirmed two soldiers were among the latest Ebola victims.

The deaths of the soldiers are a stark reminder of the challenges of controlling the epidemic in the strife-torn east.

Health officials have described the DRC as ‘one of the most complex settings possible’.

This is largely due to widespread militia violence in eastern Congo, which experts claim has hampered the response from aid workers.

Medics have managed to save 257 people, the ministry claims, but the recent epicentre of cases has threatened neighbouring countries.

Only the DRC has been affected by the ongoing outbreak, with Butembo and Katwa being the hot spots with 65 per cent of new confirmed cases in the past 21 days.

The number of cases in Katwa – a city of a several hundred thousand people near the Uganda border – has jumped from 146 cases to 172 in one week.

Several other zones in this district have been hit already, as Sudan, Uganda and Rwanda have been on high alert for months. 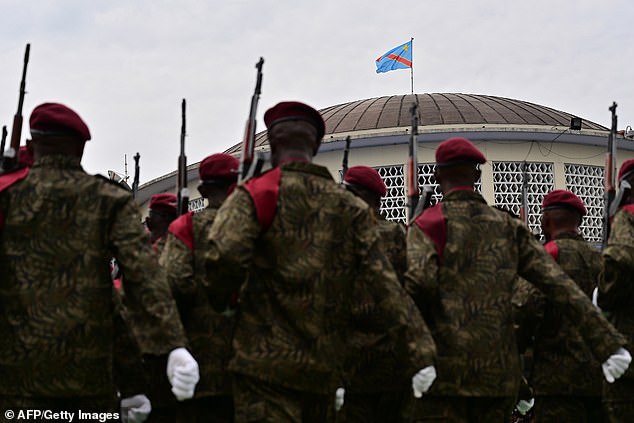 ‘All measures have been taken to stop the troops from being contaminated’, according to an army spokesperson. Pictured are soldiers of the DRC’s defence on January 24 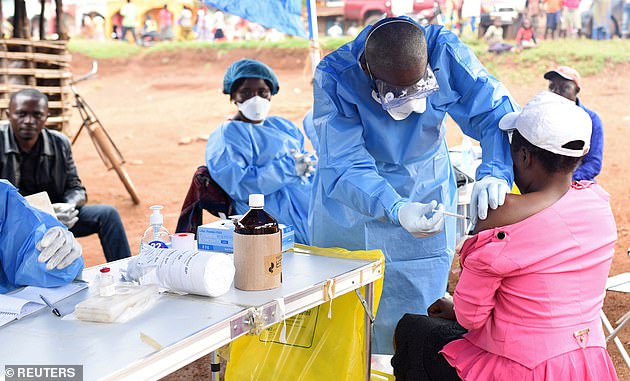 Fears are growing the disease could spread to the DRC city of Goma, which sits on the border with Rwanda.

Goma has almost double the population of Butembo, meaning there is a much higher potential for the virus to spread quickly.

In response, vaccinations to front-line responders in South Sudan were stepped up in the past week, providing 2,160 doses to the African nation.

South Sudan is at a particularly high risk of imported cases due to the cross-border movement of people and goods.

On top of the vaccinations, the WHO has also deployed more than 30 staff to these high-risk areas and helped train 60 health workers to administer the jab – which is yet to be licensed.

The vaccine protects against the Zaire strain of the virus, which is behind the DRC’s ongoing tenth outbreak.

The highly contagious haemorrhagic disease was first identified in 1976 near the Ebola river in the northwest of the country.

This outbreak was declared on August 1 in the region of Beni, a major market town in North Kivu, and rapidly spread to neighbouring Ituri province.

WHAT IS EBOLA AND HOW DEADLY IS IT?

Ebola, a haemorrhagic fever, killed at least 11,000 across the world after it decimated West Africa and spread rapidly over the space of two years.

That epidemic was officially declared over back in January 2016, when Liberia was announced to be Ebola-free by the WHO.

The country, rocked by back-to-back civil wars that ended in 2003, was hit the hardest by the fever, with 40 per cent of the deaths having occurred there.

Sierra Leone reported the highest number of Ebola cases, with nearly of all those infected having been residents of the nation.

WHERE DID IT BEGIN?

An analysis, published in the New England Journal of Medicine, found the outbreak began in Guinea – which neighbours Liberia and Sierra Leone.

A team of international researchers were able to trace the epidemic back to a two-year-old boy in Meliandou – about 400 miles (650km) from the capital, Conakry.

Emile Ouamouno, known more commonly as Patient Zero, may have contracted the deadly virus by playing with bats in a hollow tree, a study suggested.

HOW MANY PEOPLE WERE STRUCK DOWN?

Figures show nearly 29,000 people were infected from Ebola – meaning the virus killed around 40 per cent of those it struck.

Cases and deaths were also reported in Nigeria, Mali and the US – but on a much smaller scale, with 15 fatalities between the three nations.

Health officials in Guinea reported a mysterious bug in the south-eastern regions of the country before the WHO confirmed it was Ebola.

Ebola was first identified by scientists in 1976, but the most recent outbreak dwarfed all other ones recorded in history, figures show.

HOW DID HUMANS CONTRACT THE VIRUS?

Scientists believe Ebola is most often passed to humans by fruit bats, but antelope, porcupines, gorillas and chimpanzees could also be to blame.

It can be transmitted between humans through blood, secretions and other bodily fluids of people – and surfaces – that have been infected.

IS THERE A TREATMENT?

The WHO warns that there is ‘no proven treatment’ for Ebola – but dozens of drugs and jabs are being tested in case of a similarly devastating outbreak.

Hope exists though, after an experimental vaccine, called rVSV-ZEBOV, protected nearly 6,000 people. The results were published in The Lancet journal.