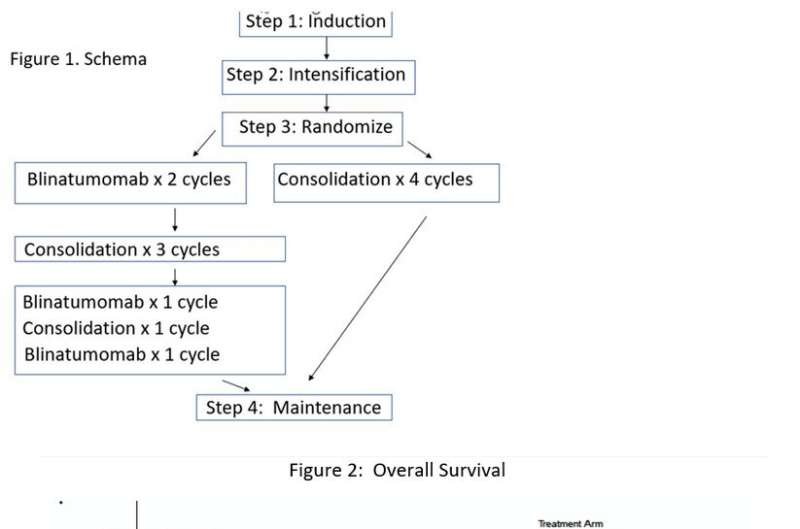 Late-breaking research reveals a major treatment advance for adults with newly diagnosed B lineage acute lymphoblastic leukemia (ALL). The randomized phase 3 study E1910 evaluated blinatumomab immunotherapy in patients with a good prognosis after an initial round of chemotherapy. After about 3.5 years of follow-up, 83% of the patients who went on to receive additional standard consolidation chemotherapy plus experimental blinatumomab were alive versus 65% of those who received chemotherapy only.

Lead researcher Mark R. Litzow, MD, presented the results of Abstract LBA-1 at the 64th American Society of Hematology (ASH) Annual Meeting and Exposition on Tuesday, December 13, 2022, at 9:00 AM Central Time. LBA-1 was the first of only six late-breaking abstracts at this meeting and was part of the official press program on Monday, December 12, at 8:30 AM CT.

“The addition of blinatumomab to consolidation chemotherapy represents a new standard of care for patients with newly diagnosed B lineage acute lymphoblastic leukemia, who are in remission and have no measurable residual disease after induction chemotherapy,” said Dr. Litzow, a Professor of Medicine at the Mayo Clinic in Rochester, Minnesota.

Current treatments for newly-diagnosed ALL frequently lead to remission. Still, unfortunately, relapses often occur in patients, leading to poor survival rates even in those with no measurable residual disease (MRD) after induction chemotherapy. An MRD test looks for any cancer cells that were not killed by cancer treatments.

The goal of the E1910 trial was to further improve overall survival in patients with a better prognosis, defined as in complete remission and MRD negative (<0.01%), by bringing blinatumomab into the front-line setting. E1910 data will be discussed with regulatory agencies for registrational purposes and blinatumomab label expansion.

Blinatumomab is a “targeted” drug that directs a patient’s T cells (part of the immune system) to recognize malignant B cells and destroy them. It has two FDA approvals for patients with B lineage ALL: those with relapsed/refractory disease (approved in 2014) and those in first or second complete remission who test positive for MRD at >0.01% (approved 2018).

“This is the first randomized trial to demonstrate that we are able to improve the survival of ALL patients who are in complete remission, including by sensitive MRD testing, and establishes the addition of blinatumomab immunotherapy to standard consolidation chemotherapy as the new standard of care,” said Selina M. Luger MD, FRCPC. Dr. Luger is Chair of the ECOG ACRIN Leukemia Committee and a Professor of Medicine at the University of Pennsylvania’s Abramson Cancer Center in Philadelphia.

A total of 77 clinical sites in the United States, Canada, and Israel enrolled 488 patients with newly diagnosed B lineage ALL between December 2013 and October 2019. Patients with the BCR::ABL1 gene abnormality were not eligible. The median age was 51 years (range 30-70).

The standard treatment of ALL is rather complicated, with multiple cycles of combinations of chemotherapy. The E1910 treatment overview is as follows:

The study found no new safety concerns associated with the use of chemotherapy plus blinatumomab, and used 72- and 96-hour infusions in 72% of the patients. These infusion times proved necessary to feasibly conduct the trial. The researchers plan to further analyze the data to determine whether particular subgroups of patients are more likely to benefit from blinatumomab than others.