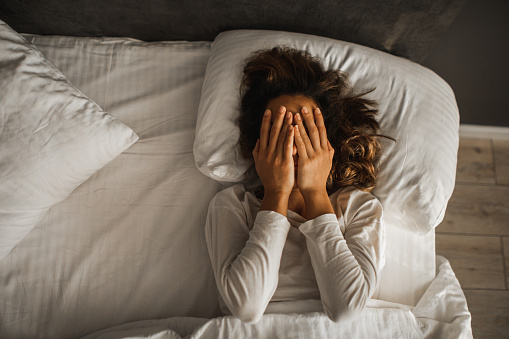 Queen Rihanna once said that she only gets three or four hours sleep a night.

Meanwhile, J.Lo has talked about burning the candle at both ends in her twenties, saying she would get just ‘three to five’ hours of shut eye.

According to the NHS adults need, on average, between seven and nine hours sleep a night.

If you have the odd bad night, it’s not a big deal, but if you’re consistently struggling to sleep, you could face the consequences.

We spoke to the experts to find out exactly what happens when you’re not well rested.

Dr Sue Peacock is a consultant health psychologist and sleep expert. She explains: ‘Unfortunately, one can exacerbate the other.

‘Anxiety can have a negative effect on your body’s ability to fall asleep, as your brain is in “fight or flight” mode, thinking of all the potential outcomes for whatever is causing the anxiety.

‘Furthermore, anticipatory anxiety and specific anxiety about sleep can lead to sleep disturbance and insomnia, which then creates a feedback loop that can make both conditions worsen.’

Research has also found that a lack of sleep can make us feel low.

‘It can cause us to have a reduced capacity for remaining positive when faced with emotionally challenging events,’ says Dr Sue. ‘You might also feel less able to enjoy positive experiences.’

When we’re asleep, our bodies are working extra hard, fighting off infection.

Dr Sue explains: ‘Research shows that there is a complex link between sleep-wake cycles and our immune systems.

‘While you sleep, your immune system produces protective, infection-fighting substances such as cytokines. It uses these substances to combat foreign invaders such as bacteria and viruses.

‘These cytokines also help you sleep, giving your immune system more energy to defend your body against illness.’

So if you’re not getting enough sleep, you’re not producing as much of these magic cytokines. ‘This lowers the body’s response to infection,’ explains Dr Sue.

‘It increases our vulnerability to disease, and it may take you longer to recover from illness.’

A lack of sleep can also play havoc with the thyroid hormone, causing issues for those that have periods.

Dr Katharina Lederle, a sleep and body clock specialist, said: ‘The level of thyroid-stimulating hormone (TSH) increases during sleep deprivation, and in healthy young women in their follicular phase, is associated with a significant increase in TSH level.

‘High levels of TSH causes menstrual irregularities, anovulation (when an egg isn’t released), amenorrhea (when you don’t get periods) and recurrent miscarriages.’

Ever wondered why you’re ravenous after a bad night’s sleep?

Whilst we’re sleeping, hormones such as cortisol, leptin and ghrelin are regulated – which are the hormones that are important in the control of weight.

A lack of sleep decreases the levels of these hormones in the blood. ‘Long term lack of sleep increases appetite, overeating and weight gain,’ explains Dr Sue.

Obesity is also more likely in those that don’t sleep well.

This one probably comes as no surprise – if you don’t get enough sleep, you’re far less productive during the day.

Dr Katharina explains: ‘One US study found that employees who averaged five hours of sleep a night lost 2.22 days of work a year, compared to the 1.48 of those that got eight hours.

‘A lack of sleep negatively impacts all the things we need to do our jobs well: cognitive performance, decision-making, memory and attention span.’

Not getting those sleeping hours in can actually affect your health in many different ways.

‘Research suggests people are at greater risk of cardiovascular diseases such as hypertension, stroke and heart attack,’ says Dr Sue.

‘There’s also an increased risk of diabetes and other chronic conditions.’

Not only that, but a lack of sleep is also associated with memory and cognitive impairment – it even increases your risk of Alzheimer’s.

How to get a better night’s sleep

Vicki Beevers, CEO of The Sleep Charity shares her tips: