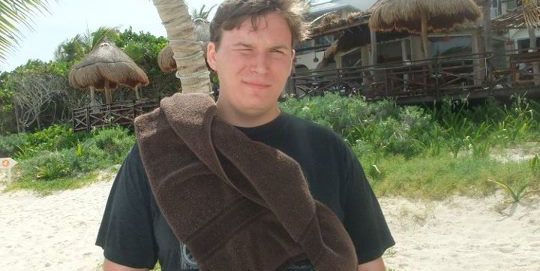 Logan Chapman knows what it’s like to fight tooth and nail for what you want. After all, he did drop more than 100 pounds on his quest to get healthy. But, as a guy who hates dieting and the gym, and has a severe case of dessert FOMO—translation: fear of missing out—Chapman may have one of the most relatable weight loss experiences of all time.

“I feel like my life was probably very similar to a lot of other people who struggle with weight gain,” Chapman, a 30-year-old from Ontario, Canada, told Men’s Health. “I was a huge fan of eating very unhealthy foods and not a big fan of exercise. I led a very sedentary lifestyle. I would stay up till all hours of the night playing video games and would often be drinking cans and cans of pop and eating huge meals at two in the morning.”

There was no single “ah-ha” moment when he decided to lose weight, but one thing that does stick out in Chapman’s mind is when he hopped on a scale one day and saw the number inching toward 300 pounds.

“Certainly weighing in at 296 was a bit of an eye-opener,” he said. “Being a 6’3″ guy, as irrational as this is, I felt that being two hundred and something pounds was okay. Three hundred, on the other hand—that was an entirely different number that I couldn’t justify in my head.”

At the same time, Chapman saw a dear friend begin his own health journey. His buddy started eating better and working out more, and in seemingly no time, he lost 50 pounds.

Chapman’s first step was cutting out all those “cans and cans” of soda he drank, which almost instantly resulted in a 10-pound weight loss. The second step was not eating giant meals in the middle of the night, which according to him, “was actually harder than it sounds.”

But his biggest challenge of all came when he decided to step into the gym to try and accelerate his weight loss.

“It was an intimidating nightmare scenario for someone like me who prefers to sit still and not be around people,” Chapman shared. “So after forcing myself to go a few times, I slowly started to realize that I did, in fact, actually hate it.”

So Chapman’s next challenge was figuring out how to continue losing weight without going to the gym. Thankfully, his wife had the answer: The keto diet.

He subscribed to a very low-carb diet that had him eating more protein and fats. He then began a small running routine, which kept him out of the gym but still working out. In one year, he dropped 50 pounds.

“It was the first time where I could look in the mirror or [at] an old picture and actually notice that I had slimmed down,” he said about that one-year mark. “I was very excited and proud that I actually stuck to it and I was seeing results.”

Still, Chapman had a long way to go to get over what he called his “undying love for any food that is absolutely terrible for me.”

Keto was a good first step in resetting his diet, because it gave him direction. But once he went off keto, eating became more difficult.

“I wasn’t eating terribly, but I also wasn’t on any particular diet,” he explained. “This is something that is actually important to me: I want to be healthy, but I don’t want to give up on all the food that I love. So I kept exercising and just remembered that if I was going to have pizza that night, I should probably go for a longer run or eat lighter for my other meals. That sort of rationale worked out, and I kept dropping weight slowly over the next couple [of] years.”

Though his progress slowed, Chapman did eventually reach his new weight of 192 pounds, meaning he dropped 104 pounds from his heaviest weight. For the first time in his life, Chapman said he can go into any store and find clothes that fit. His self-confidence has improved, which has had a positive impact on nearly every aspect of his life.

“Putting in the work to lose weight has also given me a sort of drive that I didn’t have before,” he said. “Now it no longer seems that a difficult task I am faced with is impossible. Instead, now I know that all it takes is a little dedication.”