Public Health England, which compiles reports on flu activity in the UK each week, says the death toll now sits at 68.

The new data shows cases of flu have risen again since last week, with jumps of up to 40 per cent across the home nations. Wales is currently being hit the hardest.

Health bosses warn this winter’s influenza outbreak is now in motion and is expected to pile pressure on an already-stretched NHS.

Rates of the common illness have more than doubled in England, Scotland, Wales and Northern Ireland during the first two weeks of January. 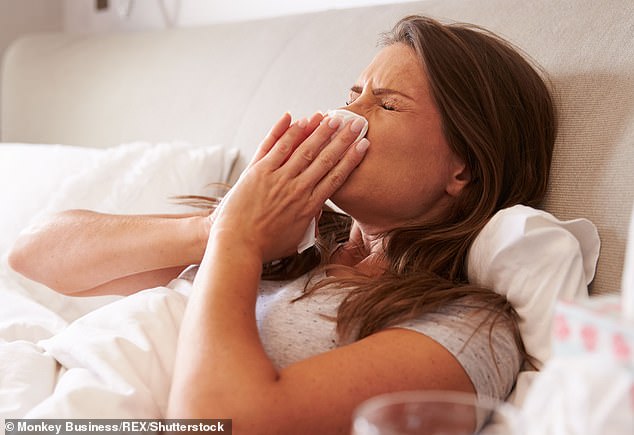 New data from Public Health England (PHE) shows that GP consultations for flu-like illness rose from 14.8 to 19.2 per 100,000 people over the last week

Figures released today by Public Health England showed the number of people GPs and hospitals seeing patients with a flu-like illness jumped by a third in a single week.

There are now an average of 21 people per every 100,000 seeing a GP in Britain for symptoms resembling flu.

This suggests flu is having a ‘moderate impact on hospital admissions, and a high impact on intensive care units and high dependency unit admissions’, PHE said.

Throughout the last week there were 237 admissions to intensive care or high dependency units for flu.

The figure is higher than in the same week in the previous five years, with the death toll for week three also the highest.

A total of 26 people died, up from 17 last year which was believed to have been one of the deadliest since the 1970s.

In Wales, which is seeing the most people diagnosed with the illness, there are what PHE calls ‘medium’ levels of the virus – with 20.4 cases per 100,000 people.

Levels are still low in England and Northern Ireland, and below the threshold for concern in Scotland, where flu is more common.

None of the British nations are currently at risk of an epidemic.

PHE said the rises are ‘typical for this time of year’ but added that influenza is ‘starting to have a greater impact’.

HOW DOES THIS FLU OUTBREAK COMPARE TO THOSE IN THE PAST SIX YEARS?

Richard Pebody, head of flu at PHE, said: ‘In the last week, there have been small increases to both hospital and intensive care admission rates, meaning flu is starting to have a greater impact. These rises are typical for this time of year.

‘We are currently seeing mainly A(H1N1)pdm09 circulating, which is well matched to the strains in this year’s flu vaccines.

‘So if you’re eligible, it’s not too late to get your free jab to protect yourself and vulnerable people around you.’

Other figures released today revealed, although performing better than last year, NHS hospitals are struggling to cope with the pressures of winter.

And one in eight people taken to A&E in an ambulance was forced to wait at least half an hour before being handed over because hospitals were too busy.

And 19 out of 20 overnight hospital beds in the entire country were full – higher than the ‘safe operating level’ and the busiest they have been all winter.

The data also showed 4,000 beds were shut during last week because of norovirus or diarrhoea and vomiting bugs, the highest toll yet this winter.

An average of 94.7 per cent of beds were full overnight last week, higher than the NHS target of 92 per cent.

The Royal College of Surgeons warns figures above 85 per cent increase the risk of infection for patients and makes it harder for the NHS to operate safely.

An NHS spokesman said: ‘NHS staff continue to pull out all the stops with flu and norovirus cases continuing to rise as expected in January.

‘Thanks to closer working between hospitals, local health groups and councils, fewer people are spending long periods in hospital compared with this time last year.

‘With temperatures set to drop, it’s more important than ever that people help staff provide care to the most seriously ill, by getting the free flu jab if you’re eligible, and by using the NHS 111 service as the first port of call for non-emergencies.’

Dame Donna Kinnair, acting chief executive of the Royal College of Nursing (RCN), said: ‘With bed occupancy averaging 95 per cent, these figures show we’re right back to where we started after a brief lull over Christmas.

‘These figures show that hospitals are only just keeping their heads above water, and we have not yet faced a serious cold snap of outbreak of flu that could send the system into meltdown.’

Director of policy and strategy at NHS Providers, Miriam Deakin said: ‘The figures this week show that the winter is making an impact, but trusts are coping, with staff working tirelessly for their patients.

‘Falling temperatures and rising cases of flu and norovirus are adding to already exceptionally high demand for NHS emergency care.

‘Bed occupancy has risen to 94.7 per cent from last week, and trusts are telling us that people arriving at hospital are sicker, requiring more complex care.

‘Despite high bed occupancy, trusts have not yet opened the number of extra beds that they did last year.

‘The efforts to reduce the number of patients staying over 21 days mean beds can be used more efficiently, allowing patients to return home or into community care when appropriate.’

HOW BAD IS THE UK BEING HIT BY FLU THIS WINTER AND HOW CLOSE ARE WE TO AN EPIDEMIC?

Health authorities across England, Scotland, Northern Ireland and Wales monitor rates of flu in their own country.

They track the number of flu symptoms reported in GP consultations in a weekly report, published by PHE.

Each country sets its own criteria on what is an epidemic, based on how often flu symptoms are reported per 100,000 patients.

None of the home nations have yet to reach epidemic levels, however England and Northern Ireland are in the ‘low’ threshold. Wales is now in the moderate zone, while Scotland has yet to cross the first threshold.

The PHE report also delves into excess deaths – how many more people die than expected – to give a rough estimate of flu deaths.

None of the countries have crossed this mark yet. The data shows 41 people have died from flu in intensive care units across the UK so far this year.