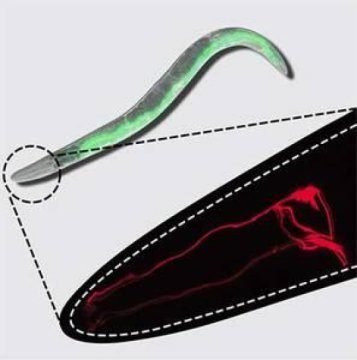 The smell of food induces a variety of physiological processes in our body. Thus, the production of saliva and digestive enzymes is stimulated before the actual food intake in order to prepare the gastrointestinal tract for the upcoming digestive process. In a healthy organism, this coordination depends on a dynamic balance between formation and degradation of proteins (proteostasis). This plays an important role for the recycling of cells and during the aging process.

Scientists of Thorsten Hoppe’s lab at CECAD, the Cluster of Excellence for Aging Research at the University of Cologne, have now succeeded in demonstrating the influence of food odours on proteostasis. The experimental investigations were carried out in the roundworm Caenorhabditis elegans, a fundamental model organism of modern biomedical research. Their finding: two of the 358 neurons that form the nematode nervous system are part of the olfactory system, and thus important for odour perception.

The researchers were able to uncover the influence of smelling on the physiology of the digestive tract by investigating the recycling of green fluorescent proteins in the intestine. The brighter the green fluorescent signal within the worms, the more severe the accumulation of cellular waste, strongly correlating with defective protein degradation.

The underlying processes are mediated by the regulatory microRNA molecule mir-71. This molecule regulates the genetic programme of olfactory neurons and, afterwards, degradation processes in the digestive tract. However, if this mechanism is blocked, not only are cellular recycling processes diminished, the animal’s lifespan is also reduced. In other words, roundworms with a non-functional ‘sense of smell’ live much shorter — a strong indication for its physiological significance.

This mechanism is central for the proper processing of odour signals and mediates adjustments in the intestinal cells. ‘We assume that the organism coordinates food intake and effective degradation this way’, commented first author Dr. Fabian Finger, who was recently awarded with the Klaus Liebrecht Prize of the UoC for his work.

‘The impact of odours at the cellular level is a poorly investigated field’, says Thorsten Hoppe. ‘It is well known that malfunctions in odour perception are associated with neurodegenerative diseases. We will further investigate the influence of the perception of odours on aging-associated disorders such as Alzheimer’s or Parkinson’s disease.’