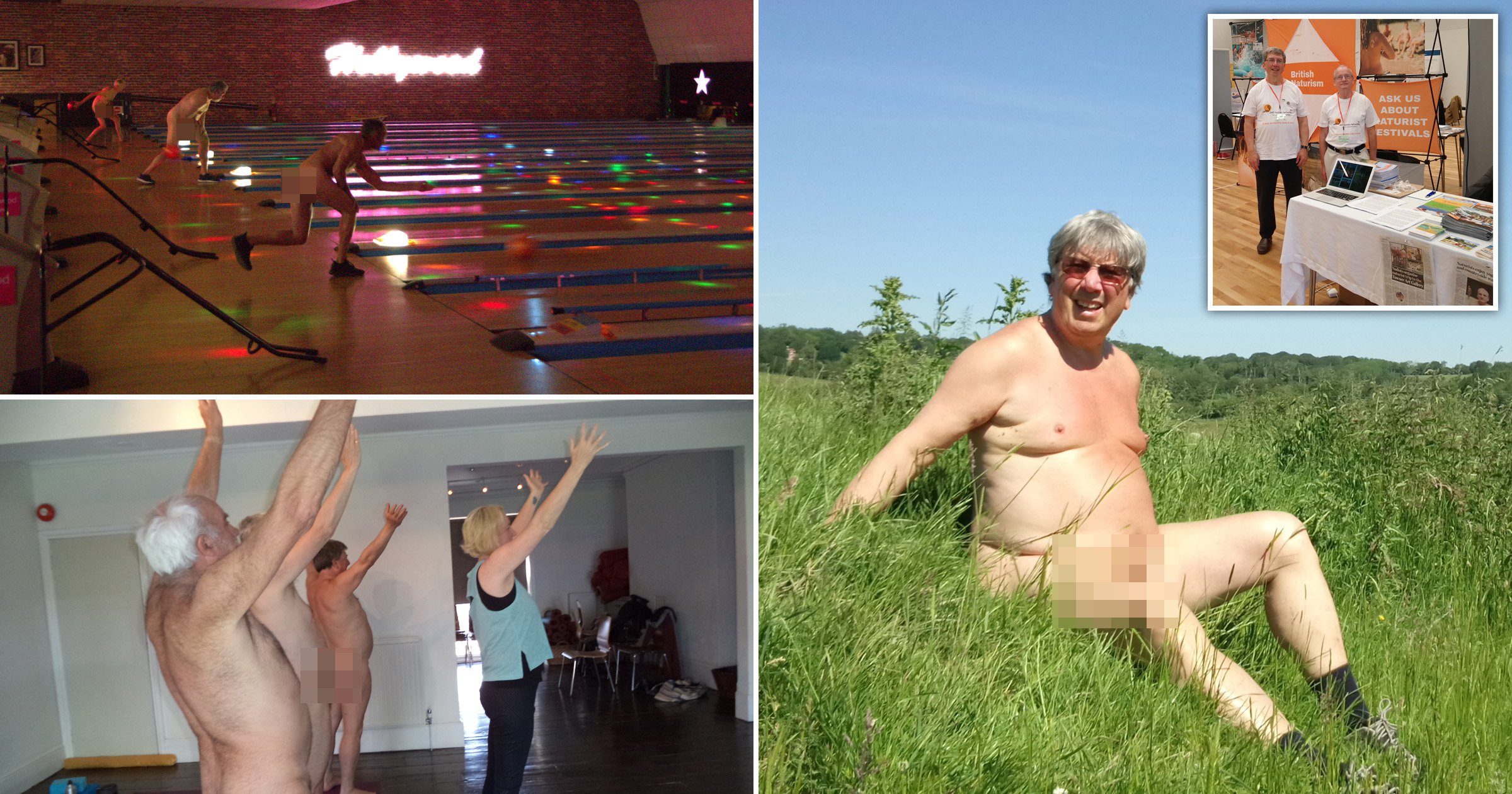 He has regularly been naked non-stop for days, only suiting up when it’s absolutely necessary.

And since the UK’s first lockdown in 2020, Philip, 67, only dons garments when he travels into his local town of Brede, Sussex.

His way of life is not without risk, with dangers including brambles, thorns and nettles, but Philip says being nude has helped his heart condition by reducing his stress levels.

The East Sussex Naturists group, has also raised thousands of pounds for the British Heart Foundation via charity walks.

Philip’s wife, Mary, joined his passion for naturism when they went on holiday, but has recently taken to wearing thin clothes while swimming due to the cold temperatures.

Philip says he’d always enjoyed being naked, and feeling the sun on his skin.

Then in 1980, in his early twenties, Philip discovered a naturist magazine, and read it cover to cover as he was ‘delighted to find that others loved being naked too’.

He joined a naturist club but didn’t feel comfortable as it mostly consisted of couples.

Philip says: ‘Being single, I didn’t feel that I fitted in and I didn’t go very often, preferring instead to cycle and find woods or a beach to strip off at.’

He says: ‘We do all the same things people do with clothes on – we’re just more comfortable, more accepting – in fact, nicer all round.

‘Generally naturists are easy-going. We make ourselves vulnerable, but we are all in the same boat, on the same level.

‘You don’t have to pretend to be anyone but your real self. When I realised this, I understood that the social side of naturism is what naturism really is about.

‘And you are free to expose your full senses to the world and delight in it.’

Philip said naturism is not just about being naked but also experiencing nature differently.

‘A delight of naturism is getting caught in the rain, a plant brushing your skin, maybe even scratching you,’ he says.

‘It’s real and it’s right in front of you and you are part of it – not just visiting.

‘It has helped keep my stress low and that keeps my heart normal and allows the mind to get off the achievement treadmill for a while.’

At 32, in 1987, Philip was diagnosed with a heart condition and he believes naturism helps him to ease the stress on his heart.

He said he always found clothes uncomfortable and, with his heart condition, he tends to feel hot and used to sweat a lot.

‘Whenever travelling on company business the first thing I always did on arrival at a hotel was to get naked,’ Philip said.

‘The stress of the day and the journey just seemed to be dispelled.

‘I’ve never really been fixated on clothes and I obviously put some on from time to time to go shopping, but I always wait until the last possible moment to put them on.’

Going weekly and meeting the same people gave Philip a sense of identity outside of work.

He decided that in order to attract more members, the group – which mostly consisted of retirees – should branch out to other activities.

Philip says that venues usually ask what their events will involve. Philip says: ‘The true answer is that apart from somewhere to store our clothes it’s the same as any “normal” event.

‘Naturists always carry a towel to sit on, so the only problem is how to carry any money.

‘Businesses are now realising that we are ideal visitors as we cannot leave (at least until the event concludes) and so will spend more money as we like to dally – what’s the rush when you are taking it all in and avidly talking to new people.’

From naked Christmas dinners in a pub to naked yoga sessions, as well as wild swimming or naturist walks, Philip organises and takes part in up to 40 events a year.

He decided to combine his passion for naturism as well as his volunteering work for the British Heart Foundation by organising a charity naked walk in 2021.

The first sponsored Naked Heart Walk was run at Painshill park in Surrey and 80 naturists raised over £26,000.

Aiming to raise more money for the charity in the future, with nearly £5,000 already amassed this year, Philip also wants to make naturism and nudity more common.

‘Since the position of the police on naturism was clarified in 2018, our mindset has been altered and we no longer need to be ready to cover up if a “textile” is spotted,’ he says.

‘Meeting non-naturists on a walk, we always make a cheery greeting, which is either ignored or met with a question often leading to an amiable conversation.

‘Being naked in nature makes you feel good, but it also makes you appreciate nature and our place in it.

‘If you find it harder to find new things to do, or you’ve arrived at the end of “1000 things to do before you die”, then you can do them all over again – naked – and it will be more fun.’