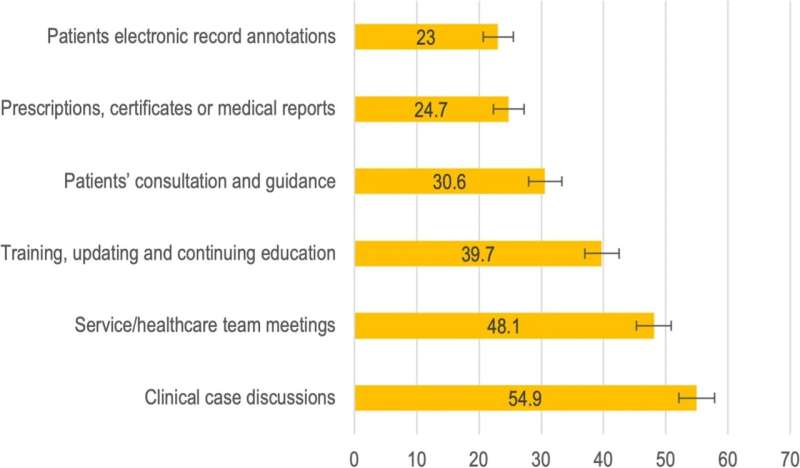 A survey of 1,183 physicians in the Brazilian states of São Paulo and Maranhão shows that the various uses of telemedicine, which turned out to be a significant alternative during the public health crisis caused by COVID-19, are set to be a permanent feature of the nation’s health system. The study was conducted by researchers at the University of São Paulo (USP), the Federal University of Maranhão (UFMA) and Queen Mary University of London in the UK.

“The multiple uses of telemedicine are here to stay. The technology has many advantages, but it isn’t a panacea. It needs to be regulated and monitored. For certain uses and specialties, there may be a loss of quality online. Not being with a patient in person often means not being able to provide care of sufficient quality,” said Mário César Scheffer, a professor in the Department of Preventive Medicine at USP’s Medical School.

Scheffer is the first author of an article on the study published in Globalization and Health.

The study was part of a large-scale research project designed to analyze the impact of the economic crisis on the Brazilian health system and seek solutions that contribute to policymaking and improve service provision.

“When health systems adapt to a crisis, be it economic, political or in health itself, they eventually find solutions and alternatives that may be transitory or permanent. Our research project was in progress when the pandemic arrived, so we seized the opportunity to study the way physicians work, in order to investigate changes in health services that might have been accelerated by COVID-19,” Scheffer told Agência FAPESP.

The results showed that telemedicine was most frequently used to connect professionals to discuss clinical services (55%), hold staff meetings (48%) and conduct training or knowledge updating sessions (40%). Less than a third of the physicians interviewed said they had used telemedicine to discuss cases with patients (teleconsultation).

Telemedicine was used more by physicians working in the private sector than the SUS (Sistema Único de Saúde), Brazil’s national health service. Physicians employed by the SUS in primary care, outpatient clinics and hospitals used it mainly for teleconsultation with COVID-19 patients. “Physicians with their own offices and clinics that receive paying patients or patients with medical insurance used telemedicine mainly to deal with health problems not associated with COVID-19,” Scheffer said.

Telemedicine, he explained, is more than online patient consults. Its multiple uses include meetings of multidisciplinary teams to make decisions about treatment, training for health workers, and dissemination of new clinical protocols, as well as teleconsultation.

“During the pandemic, for example, it was possible thanks to this technology to bring in a specialist not available in person right then at a particular service or ICU to give an opinion, contribute to a diagnosis or otherwise assist colleagues,” he said.

Another important use of telemedicine was distance education involving courses, lectures and discussion forums. “In a pandemic and other public health emergencies, telemedicine can be used to standardize and disseminate clinical guidelines, consensus therapies and advice on surveillance, all of which is constantly evolving,” Scheffer said.

The researchers noted potential risks of the indiscriminate use of telemedicine. “More studies are needed,” Scheffer said. “Our hypothesis is that telemedicine isn’t effective for certain health problems and in certain specialties. It can play an ancillary role, particularly in triage and for the provision of guidance, but there are situations where the in-person relationship between physician and patient is irreplaceable.”

Other negative aspects of telemedicine noted by the researchers include the possibility of failure to report notifiable diseases, the difficulty of agreeing on physician pay, and ethical issues involving the physician-patient relationship, data sharing and the security of sensitive patient data posted online.

Much remains to be discussed. “The pandemic accelerated the use of telemedicine and also showed the extent to which regulation needs to advance. We’re concerned, for example, about how telemedicine is being used by health plans and popular clinics to sell low-quality services at a low price,” Scheffer said.

On March 19, 2020, two days after quarantine measures were announced by state governments because of the pandemic, including lockdown in some cities, all restrictions on telemedicine were provisionally lifted by the Federal Medical Council (CFM) and the Senate, the upper house of Brazil’s National Congress. In May 2022, the CFM issued a definitive regulatory framework for telemedicine, while at the same time stressing the importance of in-person consults whenever possible.

The study sample (1,183) was considered representative of the 152,511 physicians in active service in the states of São Paulo and Maranhão. The former, located in the Southeast region of Brazil, is the country’s wealthiest state, while the latter is a much poorer state in the Northeast. The two states differ significantly in terms of the number of physicians per 100,000 inhabitants, the size of their health services and household income levels, as well as other socio-economic indicators.

“The results of the study evidenced inequalities in the use of telemedicine. This should ring alarm bells. The technology was much more used in the private than the public sector, in the state capitals than the interior, and in São Paulo than in Maranhão,” Scheffer said.