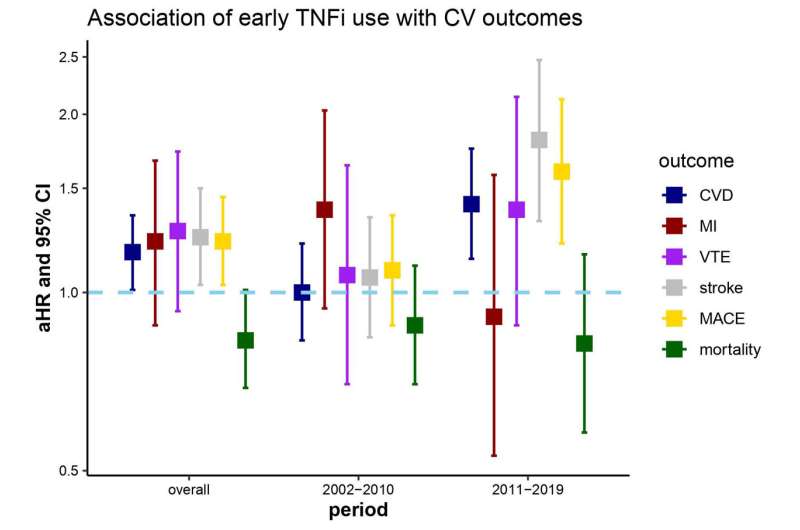 New research presented this week at ACR Convergence 2022, the American College of Rheumatology’s annual meeting, found that early initiation of tumor necrosis factor (TNF) inhibitors was associated with higher risk of heart disease in patients diagnosed with ankylosing spondylitis. Researchers caution that confounding by indication may have influenced the results.

Patients diagnosed with ankylosing spondylitis (AS), a type of spondyloarthritis, have an increased risk of cardiovascular disease (CVD). TNF inhibitors have established efficacy in treating both axial and peripheral ankylosing spondylitis symptoms, but their effects on cardiovascular disease are unknown. Researchers undertook this study to see if early use of TNF inhibitors would be cardioprotective.

The cohort consisted of 17,666 AS patients within the Veterans Affairs Corporate Data Warehouse—one of the largest integrated health care information systems in the U.S—from 2002 to 2019.

Patients were considered to have AS if they had one or more inpatient or two or more outpatient ICD codes for AS at least six months apart. Early TNF inhibitor use was defined in the 12-month period following the date of the first AS ICD code.

In designing the study, the researchers sought to avoid confounding by indication—that is, the reason patients are prescribed one medication over another may be related to their likelihood of having the outcome of interest. It’s often hard to fully account for in observational studies because data about why a medication is prescribed may be missing.

“To try to minimize confounding, including confounding by indication, we calculated propensity scores and then inverse probability weights. To estimate the risk of each CVD outcome in patients who started TNF inhibitors early versus those who didn’t, we used Cox proportional hazards models with these inverse probability weights,” explains Jean Liew, MD, MS, an Assistant Professor of Rheumatology at Boston University School of Medicine and the study’s lead author.

Of the 17,666 patients in the cohort, 2,231 were early TNF inhibitor initiators. During follow-up, 15.1% had incident CVD compared to 19.7% of non-initiators. In the propensity score analysis, early TNF inhibitor treatment was associated with a greater risk of CVD, stroke, and MACE. Dr. Liew says the results were unexpected.

Dr. Liew cautions, however, that possible confounding could have biased the results, and they may not represent the “real” truth.

Dr. Liew says a follow-up study, in either the VA database or another database, should also be attempted with caveats, given the potential for similar sources of bias if important confounders aren’t available. Still, she says a lot can be done to address the cardiovascular risk in ankylosing spondylitis.