Shoppers bought three quarters fewer unhealthy products at supermarkets which didn’t have them on display at checkouts, a study has revealed.

Items to eat ‘on the go’ such as small packets of sweets, chocolate and crisps were bought a drastic 76 per cent less at tills without the treats on show.

The Government is planning to ban the ‘guilt aisles’ which see parents pestered for sweets by their children and shoppers persuaded to buy snacks as they queue. 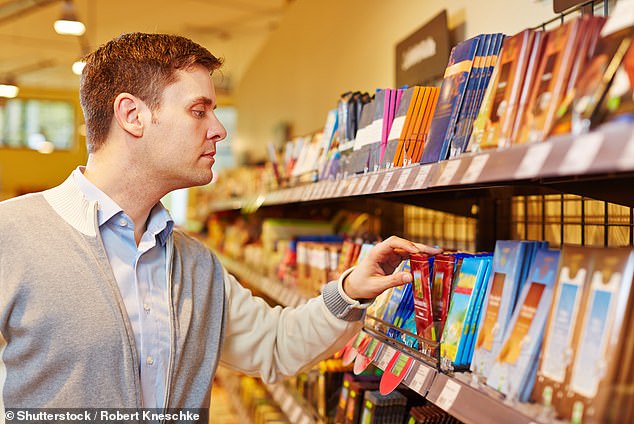 Shoppers bought three quarters fewer unhealthy products at supermarkets which had removed unhealthy items from its checkouts, a study by British universities has found (stock image)

The study, led by the University of Cambridge, looked at the six out of nine major supermarkets which have already trialled bans between 2013 to 2017.

Co-author Dr Katrine Ejlerskov said: ‘Our findings suggest that, by removing sweets and crisps from the checkout, supermarkets can have a positive influence on the types of purchases their shoppers make.

‘Many of these purchases may have been impulse buys, so if the shopper doesn’t pick up a chocolate bar at the till, it may be one less chocolate bar they consume.’

Researchers looked at the purchases of more than 30,000 British households in the year before and after supermarkets changed their checkout food policies.

They also analysed data from 7,500 shoppers who bought ‘on the go’ food from supermarkets with and without the treats near the checkouts.

Some shops have replaced sweets and chocolate near tills with bottled water, fruit and nuts.

ARE CHILDREN PICKING UP BAD EATING HABITS FROM YOUTUBE STARS?

Children who watch videos of social media personalities are more likely to eat junk food, research in May showed.

Those who see their favourite online stars eating unhealthy food in videos eat nearly an extra 100 calories – 26 per cent more – when choosing a snack.

Scientists found children who watched YouTube stars such as Zoella and Alfie Deyes, both of whom have millions of online followers, made less healthy food choices.

Experts say children may find it difficult to tell what is an advert and what is the stars’ normal behaviour, because online advertising is more subtle than on television.

The research comes as celebrities are calling for the Government to crack down on how much junk food advertising is seen by children.

The study was presented at the European Congress on Obesity.

The findings showed a ‘dramatic reduction’ in purchases which were still being seen a year later.

A total of 15 per cent fewer items were being bought compared to when no policy was in place.

Dr Jean Adams, from the Centre for Diet and Activity Research at the University of Cambridge, who led the study, said: ‘It may seem obvious that removing unhealthy food options from the checkout would reduce the amount that people buy, but it is evidence such as this that helps build the case for government interventions to improve unhealthy behaviours.

‘One such intervention might be to introduce nutritional standards for checkout food as suggested in the Government’s recent childhood obesity plan.

‘Such a government-led policy might prove attractive to supermarkets as it would provide a level playing field across the sector.’

The researchers were unable to prove definitively that the drop in purchases was due to the policies because the study was not a randomised control trial.

Dr Katrine Ejlerskov, one of the study’s authors, said: ‘This would be a relatively simple intervention with the potential to encourage healthier eating.’

The supermarkets in the study were not named to avoid ‘naming and shaming’.

However the study notes that large supermarket chains, including Tesco, Asda and Sainsbury’s, play a major role in shaping food preferences.

Product displays, positioning, promotions and pricing can all influence consumers’ choices in stores. 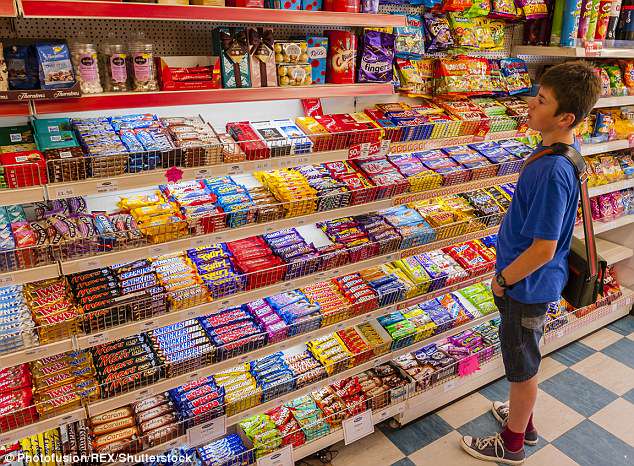 The Government plans for sweets and chocolates to be removed from supermarket check-outs, and stores will be banned from offering two-for-one deals on junk food

Over the last decade, many UK supermarkets have made voluntary commitments to remove or limit unhealthy foods at the tills or to provide healthier options.

It was revealed in June this year that the Government plans for this to become mandatory by 2020 as part its child obesity strategy.

Stores will be banned from offering two-for-one deals on junk food, as well axing ‘guilt lanes’, a report proposed.

Ministers are also consider a ban on the use of cartoon characters to promote junk food, and consult on laws to bar retailers from selling energy drinks to under-16s.

Responding to the study, published in the journal PLOS Medicine, Bryony Sinclair, senior policy and public affairs manager at World Cancer Research Fund, said: ‘We welcome studies such as this, which have been funded by the government, to help understand what policies will encourage people to make healthy choices.

‘These evidence-informed policies can then be implemented by governments to create environments that support healthier choices, as eating too much sugar can lead to weight gain, and being overweight or obese increases the risk of 12 different types of cancer.’

Around 58 per cent of women and 68 per cent of men in the UK are overweight or obese, costing the NHS around £6.1billion, out of its approximate £124.7 billion budget, every year.