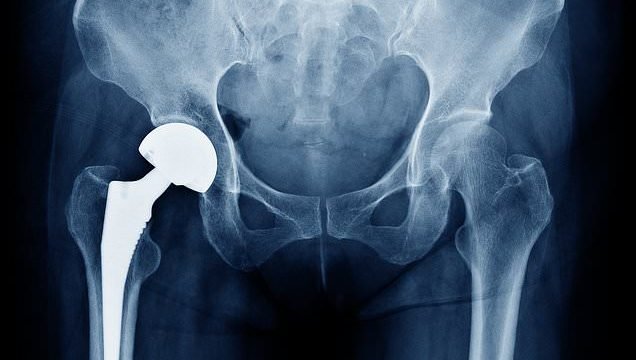 The hip and knee replacements which need replacing most often have been ranked by scientists in the first studies of their kind.

Certain brands of joint replacement have more than double the benchmark level of failure after 10 years, the research found.

It shows thousands of NHS patients are given implants which don’t match up to standards and are left with a higher risk of needing their surgery repeated.

The worst performing knee replacement had a failure rate more than three times as high as the five per cent target.

But the vast majority of implants used by the health service – 83 per cent of knees and 94 per cent of hips – perform better than standard. 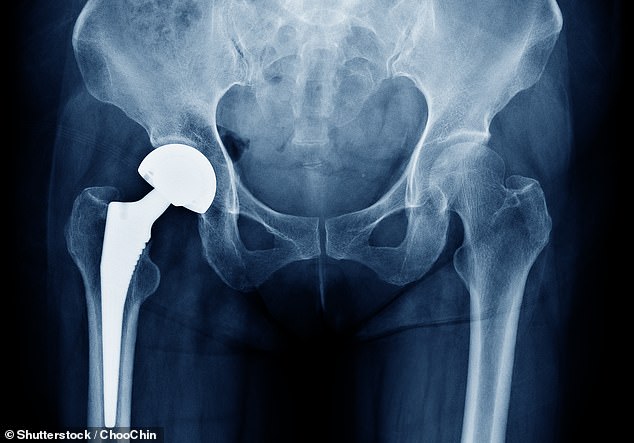 Around 160,000 hip and knee replacements are carried out every year in England and Wales in approximately 400 hospitals (stock image)

Researchers from the University of Bristol compared different brands and models of implants to work out which ones most often needed follow-up surgery.

The joint replacements they studied were used in more than 1.7million patients between April 2003 and December 2016.

NHS watchdog the National Institutes for Health and Care Excellence (NICE) has a five per cent failure rate as its benchmark for hip joint replacement performance.

A total of 10 models across both categories had 10-year failure rates higher than this, meaning they had to be repaired or replaced within a decade.

WHAT IS HIP REPLACEMENT?

A hip replacement is a routine operation carried out around 175,000 times a year in England, Scotland and Wales.

People are usually referred for a hip replacement when their natural hip joint – where the thigh bone connects to the pelvis – has worn away or become damaged and is causing pain or disability.

Most commonly this happens as a result of arthritis, in which cartilage around the joint is weakened or damaged and the bones grind against each other.

Hip replacement surgery involves sawing off the head of the thigh bone – the femur – and the hip socket (the acetabulum) and replacing them with a metal or ceramic ball and socket connected to the skeleton.

Most procedures are carried out on people between the age of 60 and 80.

It can be done on younger patients but the artficial joints are only built to last for around 15 years, with multiple replacements becoming progressively more difficult and less successful.

The operation usually takes around 60 to 90 minutes and involves spending a few days in hospital.

The worst performer was the Preservation Unicondylar fixed knee replacement, which was used in 398 operations and had a failure rate of 15 per cent.

‘This is first time that all the different implant combinations used in England and Wales in the last 14 years have been directly compared, and results are available to everyone,’ said Adrian Sayers, the studies’ senior author.

‘This gives patients the opportunity to discuss with their surgeon the choice of implants they intend to use and see how they perform in comparison to other implants.

‘This research will empower patients and surgeons and help in the decision-making process.’

Around 160,000 hip and knee replacements are carried out in England and Wales every year across approximately 400 hospitals.

The common procedure is used to repair damage done to the vital leg joints either by traumatic injury, old age or medical conditions such as arthritis.

Seven types had a failure rate of higher than five per cent.

The other 34, accounting for 74,142 procedures, all scored below the five per cent benchmark and four types had a failure rate half that.

The other 51 were below the five per cent threshold and 16 of them had failure rates lower than half the benchmark.

WHICH HIP REPLACEMENTS ARE MOST LIKELY TO FAIL WITHIN 10 YEARS?

WHICH KNEE REPLACEMENTS ARE MOST LIKELY TO FAIL WITHIN 10 YEARS?

Martyn Porter, a hip surgeon and former president of the British Orthopaedic Association, said: ‘The data produced by this study is very powerful.

‘Whilst the rate of revision is only one of the metrics by which the success of joint replacement is judged, it is one that is often important to patients.

‘This data is the beginning of a discussion that patients can have with their surgeon around the type of joint replacement that they might have.’

The research is published in the journal BMJ Open.