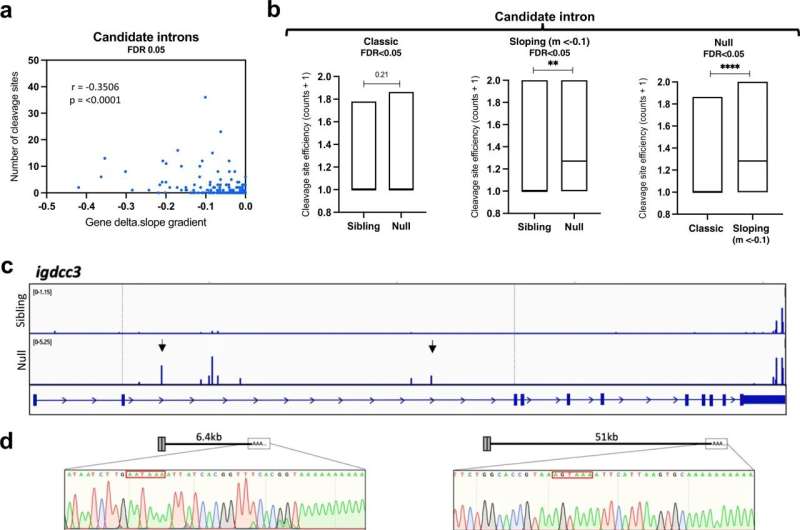 New research from the Institute of Psychiatry, Psychology & Neuroscience (IoPPN) at King’s College London has identified a new hallmark of the neurodegenerative disorder, amyotrophic lateral sclerosis (ALS), revealing a likely molecular trigger of the disease.

The study, published in Nature Communications, found that loss of the RNA processing protein, SFPQ, in motor neurons results in their “dying back.” This involves destruction of the axon (the part of the neuron responsible for connecting to and communicating with the rest of the body) and later, cell body death.

Using zebrafish, the investigators explored what happens inside SFPQ-depleted motor neurons before they degenerate. They found that draft messenger-RNAs (mRNAs) that are normally regulated by SFPQ are only partially edited and become truncated. To their surprise, these defective mRNAs are not degraded but instead stably localize to axons, where they accumulate and interfere with normal function. This is the first study to show the cascade of molecular events in axons triggered by loss of the protein.

As loss of SFPQ is strongly associated with ALS, the authors took their findings from the zebrafish and analyzed data from ALS patients. They found that the unusual defective mRNAs are enriched in patient neurons, pointing to these axonal mRNAs to be a cause for degeneration in the disease.

Corinne Houart, Professor of Developmental Neurobiology at King’s IoPPN and the study’s lead author said, “Finding the same mRNA abnormalities in zebrafish SFPQ mutant and in human ALS neurons is opening a new path in understanding the neurodegenerative process. Our findings as well as those of international colleagues show that controlling mRNA diversity in axons is essential of neuronal health. Uncovering the local changes in mRNA regulation in neurons affected by aging or neurological disorders will provide great progress in tackling these issues.”

It’s estimated that around 5,000 people in the UK live with ALS at any one time. The average survival time following diagnosis is between two to five years, and as yet there is no available cure. The findings open a possible new avenue of therapy in ALS patients, aimed at restoring SFPQ function in neurons. In doing so, one may be able to prevent their degeneration.

Dr. Richard Taylor, the study’s first author said, “We were surprised to find that these abnormal mRNAs, forming upon loss of SFPQ function, are not degraded in the nucleus. Instead, contrary to dogma they seem to escape and specifically localize to axons. Their effects either at the RNA level, or protein level if translated, are likely detrimental to axon integrity and may initiate the ‘dying back’ sequence of degeneration observed in ALS neurons”.

The researchers will now turn their focus to determining the mechanisms by which these defective mRNAs are toxic in ALS patient axons, and will investigate the effect of introducing normal SFPQ into patient iPSC-derived degenerating neurons.