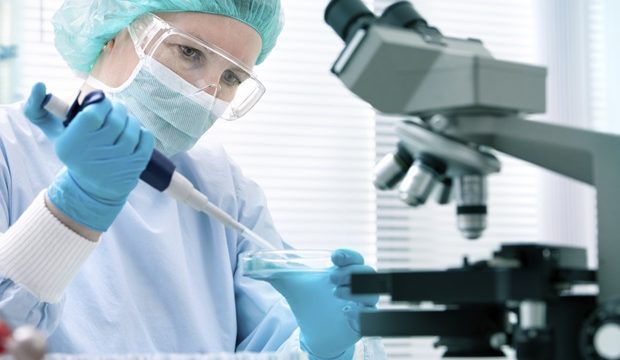 Previously, it has been impossible to capture the high-resolution images of nitrogenase, the only enzyme capable of reducing nitrogen into ammonia, during catalytic action. Now, for the first time, researchers at the University of California San Diego report near-atomic-resolution snapshots of nitrogenase during catalysis using cryogenic electron microscopy (cryoEM). The results were published in the journal Science.

This work was accomplished through a close partnership between the groups of Professor Akif Tezcan and Assistant Professor Mark Herzik, both in UC San Diego's Department of Chemistry and Biochemistry. While Tezcan has long studied nitrogenase, Herzik provided the cryoEM expertise needed to carry out the research.

This is a very important advance in terms of biological nitrogen fixation as well as structural biology, in general. To be able to obtain atomic-level-resolution pictures of an enzyme as dynamic and complex as nitrogenase in action is extremely exciting. It opens the doors to fully understanding the mechanism of this enigmatic enzyme, which has preoccupied researchers for decades."

Understanding the significance of these cryoEM images requires understanding the tremendous global importance of nitrogen fixation. All organisms require "fixed" sources of nitrogen for the biosynthesis of life's building blocks such as proteins and DNA. However, most living organisms do not possess the nitrogenase enzyme and cannot metabolize atmospheric nitrogen into a bioprocessable form.

Nitrogenase was the essentially the only source of fixed nitrogen in the biosphere until the advent of the Haber-Bosch process -; the industrial procedure for converting atmospheric nitrogen to ammonia -; more than a hundred years ago. Industrially produced ammonia is largely used for fertilizers, and its advent revolutionized agricultural practices in the first half of the 20th century. The Haber-Bosch process has often been cited as the driving factor behind the world's population explosion over the past century, having "turned air into bread."

However, the Haber-Bosch process is very energy-intensive, requiring temperatures exceeding 400°C and high pressures of hydrogen gas. An estimated 1-2% of all global energy production is consumed by the Haber-Bosch process. The process also raises environmental concerns including leaching of nitrates into groundwater and higher emissions of the greenhouse gas nitrous oxide.

A key question that drives biological nitrogen-fixation research is the contrast between nitrogenase and the Haber-Bosch process. How does the enzyme catalyze nitrogen reduction at ambient temperatures and pressure whereas the industrial process requires such extreme conditions?

"If we can understand the mechanism of nitrogenase, we may not only figure out why nature evolved it to be such a complex enzyme, but we might also uncover design principles for ammonia production in a more cost-effective and environmentally friendly fashion," stated Tezcan.

Although much is known about the structure of nitrogenase, until now, no one has been able to acquire atomic-resolution images of the enzyme while "turning over" or in the process of catalyzing atmospheric nitrogen into ammonia, largely due to technological limitations.

Although scientists can obtain atomic-resolution images of proteins using X-ray crystallography, this method requires the proteins to be fixed in place within a crystal -; stationary in a sense -; which means that it cannot capture nitrogenase in action. Nitrogenase catalysis requires different parts of the enzyme to associate with each other and then come apart several times to make a single ammonia molecule from nitrogen. The process is anything but stationary.

CryoEM not only allows researchers to capture the structures of proteins without requiring them to be fixed in crystals but, thanks to recent advances in hardware and data processing, do so with atomic resolution. Such high resolution is needed to visualize the small changes associated with enzymatic catalysis.

These advances led Tezcan and graduate student Hannah Rutledge to consider using cryoEM to study nitrogenase in catalytic action. And for this, they sought the help of resident cryoEM expert, Mark Herzik, and his group members Brian Cook and Hoang Nguyen.

"This was both an exciting and technologically challenging project to pursue, during the pandemic no less. Although cryoEM is a very capable technique, few studies have reported on enzymes as they undergo catalysis. The critical insights and technological developments in this study not only pave the way for future explorations of the nitrogenase mechanism but enzymes in general," stated Herzik.

Herzik and Rutledge worked together closely to prepare hundreds of cryoEM samples. Because nitrogenase is oxygen-sensitive, the samples were prepared in an anaerobic glove box, then quickly transferred and frozen within seconds to prevent any degradation. In the end the team collected over 15,000 videos capturing over 20 million individual molecules at varying stages of catalysis.

It took the teams almost a year to sort through several terabytes of data: they discarded low-quality images, then identified and classified all the particles. Eventually they were able to get the first atom-resolution images of nitrogenase in the middle of turnover.

The cryoEM structures revealed several unexpected features of nitrogenase which were previously not observed in X-ray structures. Importantly, the new observations provide new mechanistic hypothesis for nitrogenase catalysis. Tezcan and Herzik hope to collaborate for many years to come to test these hypotheses and understand the catalytic mechanism of nitrogenase in detail.

"This is only the beginning," stated Tezcan. "We have a picture of the whole enzyme now, not just one specific part, during catalytic action. This will really open the floodgates to further research in understanding how nitrogenase works and, potentially, down the road, developing more efficient processes for producing fixed nitrogen."