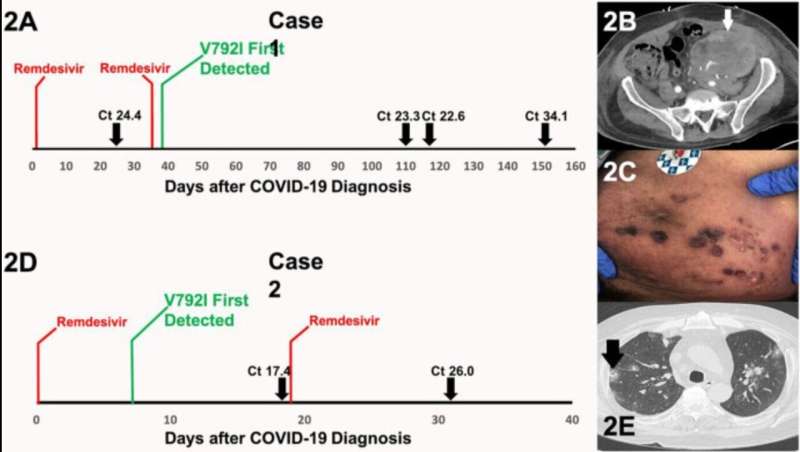 Recent studies have shown that patients with weakened immune systems—which enables the virus that causes COVID-19 to remain longer in the body, copy itself, and continually change—may enable the development of new, slightly different versions of the virus (variants). These patients include those treated with drugs that suppress the immune system to keep it from rejecting a newly transplanted organ.

A new study, led by researchers at NYU Grossman School of Medicine and NYU Long Island School of Medicine, shows that two kidney transplant patients treated with immunosuppressive drugs, and who later had a lengthy COVID-19 infection, developed a version of the virus with a genetic change (mutation) that made it resistant to the antiviral therapy remdesivir.

This treatment is among the first antiviral drugs approved for use in the pandemic and remains an important weapon against the pandemic coronavirus. Remdesivir is especially important for treating transplant recipients since the more recently developed Paxlovid (a combination of nirmatrelvir and ritonavir) can interfere with immunosuppressants sometimes used in these patients, say the study authors.

The study results reflect a standard problem in antiviral medicine, in which the rapid and error-prone reproductive process of viruses continuously creates slightly different genetic versions of themselves. Some randomly develop the qualities needed to resist the drug treatment. In the case of SARS-CoV-2, the pandemic virus, remdesivir is thought to work by interfering with the virus’s ability to create copies of itself through the action of a polymerase, a viral enzyme.

According to the findings, both patients were initially infected with a version of the coronavirus that did not carry the mutation that provides resistance to remdesivir. However, following treatment with the antiviral agent, the virus developed the V7921 RNA-dependent polymerase (V7921) gene mutation, which has previously been shown in laboratory settings to make the virus more resistant to remdesivir.

“Our findings may help explain how the coronavirus continues to develop resistance to treatment,” says study lead author John Hogan, MD, an assistant professor in the Department of Medicine at NYU Langone Health. “It is possible that the antiviral treatment itself, combined with the patients’ weakened immune systems, may have driven the evolution of this concerning mutation.”

Despite the availability of vaccines and several drug therapies for COVID-19, experts say people with compromised immune systems, such as transplant patients and those with cancer or untreated HIV, remain at high risk for the disease. The new study, publishing online Sept. 26 in the journal Clinical Infectious Diseases, is the first to identify the remdesivir-resistant V7921 mutation in organ-transplant patients treated with the antiviral drug, according to Hogan.

For the investigation, the study team collected samples from the nostrils of the two patients in their 50s and 60s who had received a kidney transplant and were using immunosuppressant drugs. Despite being vaccinated against COVID-19 prior to the surgery, both developed symptoms of the disease, such as fatigue, cough, and fever, that lingered for months.

The study team examined the genetic makeup of the viral samples at the NYU Langone Genome Technology Center by comparing small snips of the letter-like genetic code to identify mutations found in each strain. These genetic flags, researchers say, offer results similar to those from tests used to trace people’s ancestry and for the tracking of other viral outbreaks, including influenza, HIV, and Ebola.

According to the report, both patients were treated for COVID-19 with remdesivir but were readmitted to the hospital several weeks later as their symptoms worsened once again. They survived their illnesses.

However, when the researchers reanalyzed the viruses, they confirmed the presence of the V7921 mutation, which had not been present before the transplant recipients received their remdesivir treatment.

“Our results highlight the importance of continuing to monitor how the coronavirus changes over time and keeping on the lookout for genetic mutations that allow the virus to overcome the medical community’s efforts to thwart it,” says study senior author and genomicist Adriana Heguy, Ph.D. “In the future, physicians might also screen for such mutations before making treatment decisions for their most vulnerable patients,” adds Heguy, a professor in the Department of Pathology at NYU Langone.

Heguy adds that the emergence of treatment-resistant mutations may also require the development of additional antiviral therapies or development of combination medications to control infection. Similar approaches to antiviral treatment led to success in the HIV epidemic.

Heguy, also director of NYU Langone’s Genome Technology Center, says the study authors’ next plan to further explore mutations that allow the coronavirus’s ability to escape vaccines and therapies. One avenue of interest is in the spike protein, a structure used by the virus to hook onto the surface of human cells as a first step in infecting them. Notably, monoclonal antibody treatments used to treat COVID-19 bind to this same spike protein in order to prevent the virus from attacking cells or to make it more vulnerable to the body’s defenses.