Hay fever is a common condition that’s caused by an allergy to different types of pollen, according to the NHS. Pollen is a fine powder that’s released by plants, and it contains proteins that can irritate the nose, throat and eyes. With around 20 per cent of the UK affected by hay fever, pollen count spikes could result in large numbers of runny noses and watering eyes. Most of the UK can expect ‘Moderate’ levels of pollen today, the Met Office has warned.

Everywhere in the UK has ‘Moderate’ levels of pollen, apart from the Orkney and Shetland Islands, which are forecasted ‘Low’ amounts of pollen.

Although the amount of pollen in the air could trigger hay fever symptoms, there’s still a lower risk of hay fever pain than over the Easter Bank Holiday weekend.

During this part of the year, the pollen affecting hay fever patients is largely from trees, it said.

Charity Allergy UK said: “Hay fever is a common allergic reaction which occurs at particular times of the year.

“It is caused when the body makes allergic antibodies (IgE) to certain substances, such as pollen, house dust mites or mould, which are known as allergens.

“Grass pollen is the most common allergen [May to July], but tree [February to June] and weed [June to September] pollens can also cause the allergic reaction we know as hay fever.” 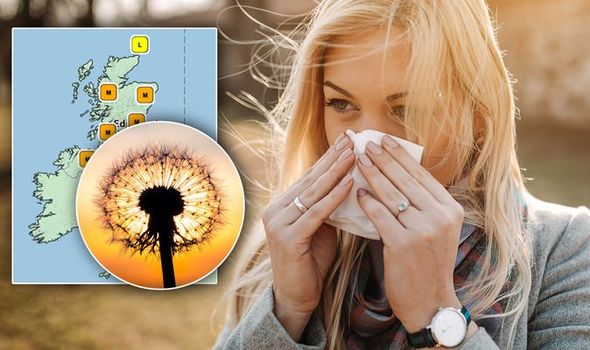 Some patients may also experience a loss of smell, facial pain, earache, and tiredness

But, the symptoms vary in severity from person to person, and change depending on how much pollen is in the air.

“These unpleasant and sometimes debilitating symptoms can be relieved by avoidance of the allergic triggers and the use of antihistamines,” said the charity.

It’s important to keep your windows closed when you’re inside – particularly in the early mornings and evenings, when higher amounts of pollen are in the air. 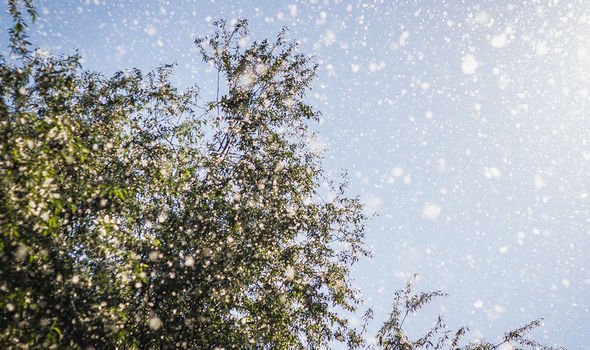 11 Tips to get you through hay fever season

Hay fever season is upon us once again, here are our top tips to reduce those annoying pollen allergy symptoms.

Avoid parks or fields, particularly in the early evening when there’s a lot of pollen floating at nose level

Putting petroleum jelly around your nostrils could help to trap pollen, and prevent symptoms, said the NHS.

Alternatively, wear wraparound sunglasses to stop pollen from getting into your eyes.

You should speak to a doctor if your hay fever symptoms can’t be controlled by over-the-counter medication.