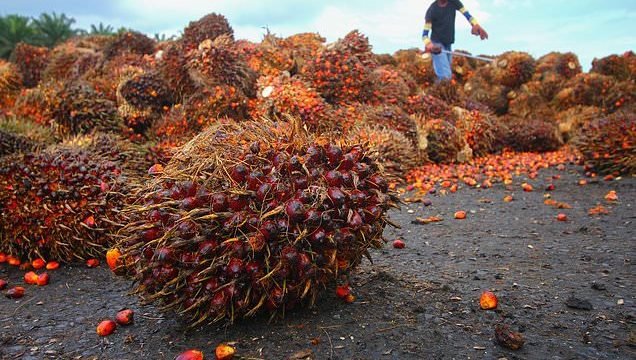 Is palm oil safe? Studies into the controversial oil have been ‘authored by the industry’ as researchers demand independent probe

Researchers have demanded an independent probe into the safety of palm oil amid claims existing studies have been funded by the industry.

Palm oil is a type of trans fat thought to be found in roughly half of all packaged goods on supermarket shelves in the UK under various names.

Trans fats are widely recognised as bad for health, but there is significant research, funded by the industry, pointing towards palm oil as healthy.

The palm oil industry has been accused of using tactics to influence research into its positive health effects, in a similar way to the alcohol and tobacco industries.

The oil, controversial for its extraction process in predominately Malaysia and Indonesia, needs more independent research, the researchers said. 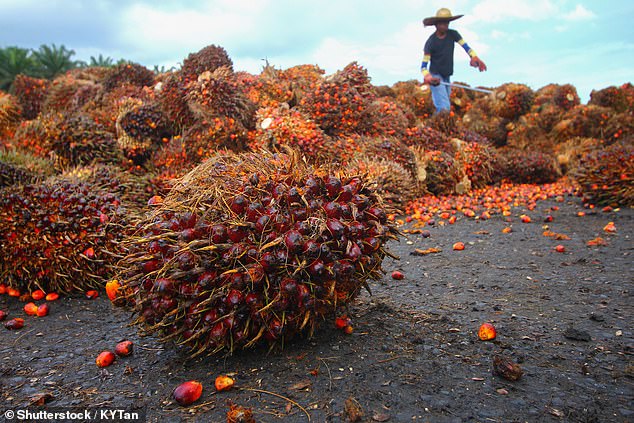 This was specifically The Malaysian Palm Oil Board (MPOB), a government agency responsible for the promotion and development of the palm oil industry in Malaysia.

‘The contested nature of the evidence suggests the need for independent, comprehensive studies of the health impact of palm oil consumption,’ the researchers wrote in the study, published in the Bulletin of the World Health Organization.

‘The relationship between the palm oil and processed food industries, and the tactics they employ, resembles practices adopted by the tobacco and alcohol industries.

Palm oil consumption has been linked to a variety of ailments including risk of death from heart disease, high cholesterol and narrowing arteries – but the evidence is mixed.

But the researchers anticipate an increase of its use in food in the near future.

Palm oil is naturally more solid than other vegetable oils, therefore is an easy choice in the industrial process.

But it is also been banned by the US Food and Drug Administration with a similar recommendation by the WHO.

‘An increase in the use of palm oil as a potential replacement for TFA in ultra-processed foods could be anticipated,’ the report said.

The study said labelling on products is often unclear, and palm oil can be listed under any one of more than 200 alternative names.

‘Consumers may be unaware of what they are eating or its safety,’ the study said.

The study also pointed to the health effect of the production of palm oil, native to West Africa, in countries where it is grown.

The study said: ‘Of major concern is the effect of exposure to particulate matter on fetal, infant and child mortality, as well as children’s cognitive, educational and economic attainment.’

The palm oil and processed food industries have mutually benefited, but researchers should be wary of being influenced by lobbyists.

The study comes after the controversy of the 2018 Iceland Christmas advert, which highlighted the harmful environmental impact of palm oil.

But the advert, created in partnership with Greenpeace, was banned from television after being deemed ‘too political’.

It featured an orangutan displaced due to deforestation. His forest home was replaced by a palm oil plantation.

Oil palm plantations cover an area roughly the size of New Zealand, with an area the size of a football pitch is torn down in Indonesia’s rainforest every 25 seconds.

Oil palms typically grown in low-lying, tropical regions – the same areas are home to rainforests and peatlands, which host endangered species like orangutans, rhinos and tigers.

In many cases, deforestation has led to ‘green deserts’ which native animals and plants are unable to survive in.

The WHO wants palm oil banned globally by 2023.

WHAT COMMON ITEMS IS PALM OIL IN AND WHAT CAN YOU USE INSTEAD?

Palm oil can give chocolate its smooth, shiny appearance and prevents melting.

Greenpeace said it had evidence that suppliers to Cadbury’s parent company Mondelez had destroyed 70,000 hectares of rainforest since 2016.

Mondelez International insists it is ‘committed to eradicating deforestation in the palm oil supply and actively working with suppliers to ensure palm oil is fully traceable’.

It added that 12 suppliers who did not meet company standards had been excluded.

. . .and one that doesn’t: Yeo Valley organic vanilla ice cream.

Palm oil is often used in baking as it is semi-solid, like butter.

…and one that doesn’t: Essential Waitrose wholemeal medium sliced.

The oil helps its crunch.

. . .and one that doesn’t: Dorset Cereals oat granola.

The oil, which is also used in margarine, aids spreadability.

. . .and one that doesn’t: Meridian organic crunchy peanut butter.

Our hair’s natural oils are restored by palm oil.

. . .and one that doesn’t: PHB Ethical Beauty shampoo.

The oil is often in frozen roasts.

. . .and one that doesn’t: Waitrose roast potatoes in goose fat.

The moisturising oil removes dirt and oil from skin and hair.

. . .and one that doesn’t: Lush Fresh Farmacy facial soap.

Refined palm oil is used in many cleaning products.

. . .and one that doesn’t: Ecozone laundry liquid.

. . .and one that doesn’t: Bloomtown Botanicals candles.

The oil holds colour well, is hard to melt and is tasteless.

. . .and one that doesn’t: Lily’s Kitchen Sun Shiny Day snack bar for dogs.

Chewy ones often use the oil.

. . .and one that doesn’t: Viridian High Five multivitamin.