When I found out a camellia growing in a public garden in Hornsby was recently designated a significant historical ornamental camellia tree by the International Camellia Research Society, of course I had to see it. 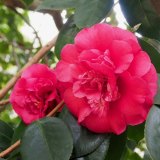 A bloom on one of the world’s most significant camellias.Credit:Robin Powell

Camellias have been bred and grown in gardens for more than 1000 years, so we don’t tend to think of those in Australia as being historically significant. For sheer longevity, for instance, it’s hard to beat one of the other individual trees recognised by the society, which is growing in a famous garden in Guangdong Province in China. It was planted in the Ming dynasty in the early 17th century and is a clone of a variety selected in the Tang dynasty, sometime around 800.

But longevity isn’t everything, and while camellias have been in our gardens for less than 200 years, they still speak to our cultural and horticultural history in a unique way.

Our awarded camellia was recognised as the finest living specimen of C. japonica Cassandra. What makes Cassandra special is that she was selected by William Macarthur, one of the early colony’s most influential horticulturists. Macarthur exchanged plants with collectors in England, Europe and Asia and the plants supplied through his Camden Park Nursery shaped early Australian gardens.

William described Cassandra in his notebooks as a “scarlet crimson … pretty flower … very large”, Every subsequent Cassandra is a clone of this original, giving the Hornsby specimen a direct link to Macarthur and colonial era Sydney.

Despite its colonial success, Cassandra is now extremely rare, but about 75 years ago, Max Cotton got hold of one and planted it in his 6.5-acre garden in Hornsby. Cotton, a chemist by profession and a gardener by inclination, had bought a big, steep bush block at the head of the Blue Gum Valley in 1917, and worked for decades to make it a garden. Hornsby Council bought it after his death, named it Lisgar Gardens, and has maintained it since. 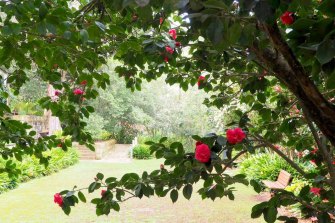 Lisgar Gardens is something of a secret for Sydneysiders outside Hornsby, and I had it mostly to myself when I went searching for Cassandra on a lucky day before lockdown. The garden is more formal at the top, becoming looser and wilder as the mulched paths loop down the slope. A waterfall rushes over rocks, tree ferns and birds nest ferns glow in the shade and more than 200 camellias splash colour about and drop petals on mossy sandstone.

I found Cassandra on the corner of a sandstone-flagged terrace, arching over a short flight of steps leading to a formal lawn. Sydneysiders don’t tend to go in much for history-bragging so there was no plaque, just the lichen blooming on the silver branches as a sign of age. The crimson flowers were very pretty, as promised by William Macarthur 172 years ago.

In need of some good news? The Greater Good newsletter delivers stories to your inbox to brighten your outlook. Sign up here.