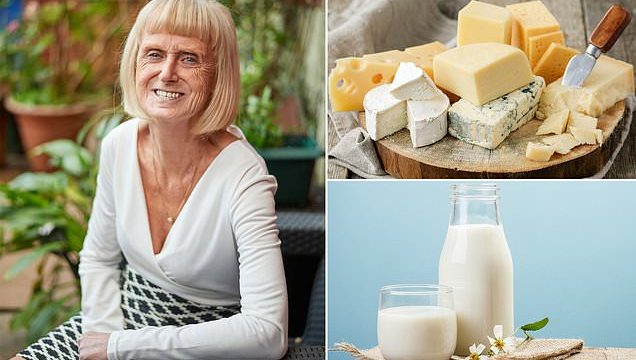 One million older Britons are at risk of starving to death: An epidemic of malnutrition is blighting the elderly and official healthy eating advice is partly to blame…

It is 4.30pm on a Wednesday afternoon. I’m with 69-year-old Gerry Collins at his small, untidy one-bedroom flat in Tulse Hill, South London.

He is still wearing pyjama bottoms. I notice because the thin cotton fabric seems to draw attention to his twig-like legs.

He’s now strong enough to make the five steps from his bed to an armchair, he announces proudly.

At the beginning of this year he’d attempted the journey unaided but promptly collapsed in a heap. 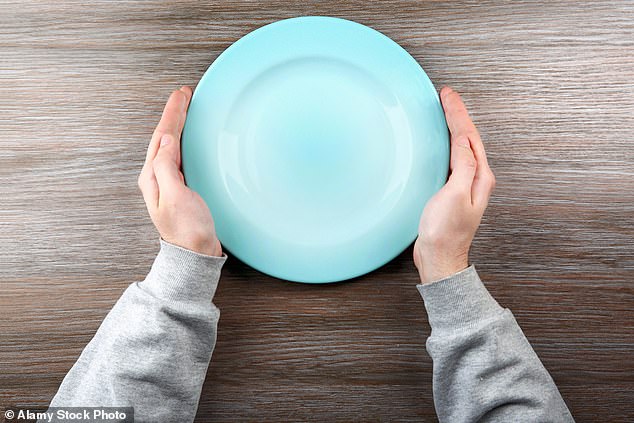 More than a million Britons are at risk, because they aren’t having enough to eat (stock image)

And this was after a six-week spell in hospital intended to nurse him back to health.

I’m here with Michelle Duffy, a dietician from Guy’s and St Thomas’ Hospital in South London. She’s checking in on him as part of a community project to combat malnutrition in older adults.

There’s a younger Gerry in photographs on the walls: a stocky, 14st man – virtually unrecognisable from the sharp, sunken face that sits before me. Gerry, who lives alone, suffers with serious heart problems.

In the months leading up to the fall that landed him in hospital, he stopped eating properly.

‘I’d have maybe two meals a day. Maybe cornflakes in the morning and frozen chips for dinner,’ he says. He separated from his wife eight years ago. ‘I didn’t really bother to cook for myself often. When you’re by yourself, it’s a lot of effort,’ he adds.

During his hospital stay, Gerry, who once worked in printing, lost his appetite completely.

‘I knew I needed to eat to get better, but I couldn’t muster the energy,’ he remembers. ‘It didn’t matter how nice the food was, I felt sick and didn’t want to eat it.’ 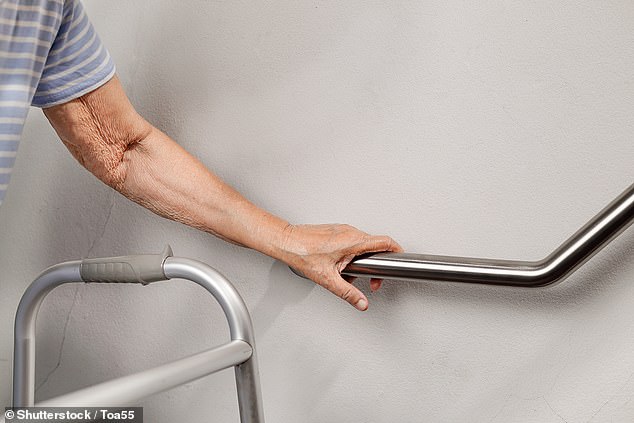 By the time he was discharged in December 2018, he weighed just under 9st and was too weak to move from his bed.

He was referred to Michelle Duffy’s team at the Lambeth and Southwark Action on Malnutrition Project.

With the help of regular visits, meal plans and high-calorie food supplements, Gerry has gained more than a stone.

But Michelle tells me there are hundreds more Gerrys in the two-mile radius alone. One man in his 70s was so malnourished that he couldn’t muster the energy to walk from the bedroom to the front door for more than six months.

Another dietician tells me of a woman who suffered starvation-induced delirium and collapsed inside her flat. A carer found her in the same position 48 hours later.

On further investigation it would seem this is happening up and down the country. It is a problem you might associate with developing countries. Yet more than a million Britons are at risk, because they aren’t having enough to eat.

I THOUGHT MY LOW-FAT DIET WAS GOOD FOR ME. IT WAS THE OPPOSITE

Christina Rochdale is a life-long ‘healthy eater’ – but her low-fat diet led to worsening health problems after she was injured in a road accident last year.

The former casino attendant from Middleton in Greater Manchester, was knocked over by a speeding car. 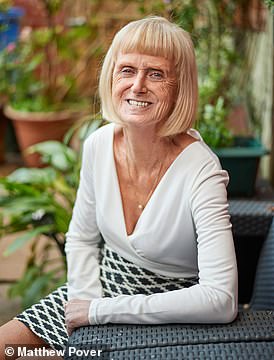 Hospitalised for four weeks with a broken leg and bruised ribs – and not a fan of hospital food – her weight dropped dramatically.

‘I looked in the mirror and was shocked. You could see all my ribs,’ says Christina, left, who lives alone.

A dietician paid her a visit, warning of the potential consequences of her low weight, such as increased risk of infection and muscle and bone wastage.

She was told to choose ‘full-fat everything’ – but it felt alien.

‘I do try to eat cakes and biscuits, but I worry that it’s the wrong type of fat – maybe it will do more harm than good,’ she says.

‘I constantly have chest and throat infections or flu, which means I can’t go out of the house.

BEING FRAIL ISN’T JUST PART OF GETTING OLD

The term ‘little old lady’ has long been used to describe women of a certain age. It’s assumed that as we age, some shrinkage is inevitable. But frailty is not a normal part of ageing.

‘It means you’re malnourished,’ explains Professor Jane Murphy, a dietician and nutrition professor at Bournemouth University, who specialises in healthy ageing. ‘Even disease-related malnutrition is something that can, and should, be prevented.’

Ask most Britons about the most pressing nutritional problems in the UK and they’ll likely point to obesity. Just last week, former Chief Medical Officer Dame Sally Davies suggested banning snacking on public transport might be a good way to tackle Britain’s ballooning weight problem. But eating too little has equally alarming ramifications, for both public health and the NHS bank balance.

According to NHS figures, a third of all hospital patients are at risk of or are already malnourished.

The additional cost to the health service of treating under-nourished patients is estimated at roughly £20 billion a year, triple that of obesity. According to the latest figures, one in ten over-65-year-olds are malnourished – roughly 1.3 million. They are, for want of a better phrase, at risk of starving to death.

Ramifications of malnutrition include bone-wasting diseases such as osteoporosis, kidney disease, hypothermia, potentially lethal infections and heart failure. Then there’s delirium, confusion and hallucinations should patients become both malnourished and dehydrated.

‘Malnutrition is a serious slippery slope to severe health problems,’ says Kirstine Farrer, consultant dietician at the Salford Royal Hospital and head of Age UK’s nutrition programme. ‘It’s behind many of the emergency situations we see. Less cushioning means they could fall over and crack a rib, and they can’t get back up.

‘Or their defence system is so poor that they contract a deadly infection, or kidney disease. Then they end up in and out of hospital. But this downward spiral can be prevented with good nutrition.’

EAT A DIET RIGHT FOR THE STAGE OF YOUR LIFE

Leading charities and organisations have joined forces to urge us to take notice of what they are calling a ‘silent health epidemic’.

The British Association for Parenteral and Enteral Nutrition and The Malnutrition Taskforce campaign group launch a nationwide crusade tomorrow to educate healthcare professionals, patients and carers about the scale of the problem. A resource pack including tools for identifying malnutrition and tips for weight gain will be sent to thousands of healthcare professionals working with older, at-risk adults – from care homes to GPs.

Age UK will also be running local events supporting the campaign. At the top of the agenda is challenging some of the Government’s messages about healthy eating.

According to Lesley Carter, malnutrition lead at Age UK, billboards telling us to cut down on sugary treats could be unknowingly putting thousands at risk. She says: ‘Advice to eat low-fat, low-sugar and low-calorie foods isn’t relevant to most of the older population.

‘For thousands of people in their 70s, 80s and 90s, the emphasis needs to be on getting more calories in.’

Carter and other campaigners would like to see the Government issue healthy-eating advice on ‘eating for your stage of life’.

Farrer agrees: ‘As we get older, increasing calorie intake, specifically from protein and fats, is important.’ Carter adds: ‘Many older people are of a generation that championed keeping fit and dieting. So switching to full-fat milk, cheese and puddings, and snacking on biscuits to get their weight up, can feel a struggle.’

Survey data released exclusively to The Mail on Sunday revealed that almost half of the 2,000 Britons polled believe a low-fat, low-calorie diet is always a healthy choice – even if you’re underweight. 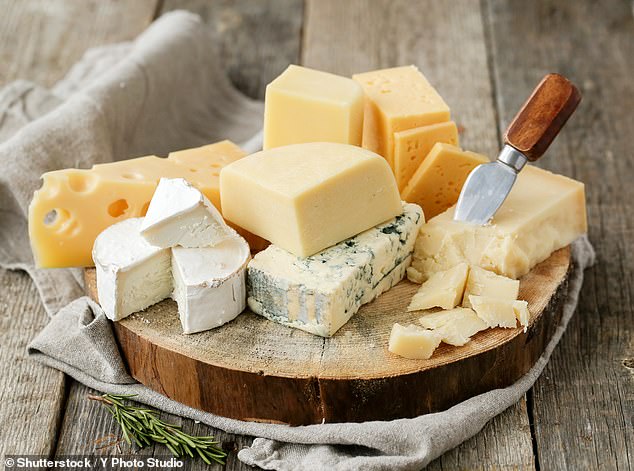 Switching to full-fat milk, cheese and puddings, and snacking on biscuits to get your weight up, can feel a struggle, Lesley Carter, malnutrition lead at Age UK, explains 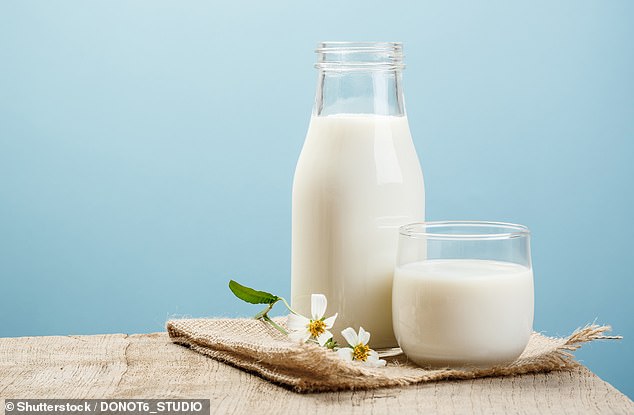 Many elderly people shun full-fat milk in favour of ‘healthier’ alternatives, but they could actually be doing more harm than good

MEALS ON WHEELS LIFELINE IS VANISHING

Another reason for the rising tide of malnourished older adults is the gradual disappearance of Britain’s Meals on Wheels services over the past decade.

In 2011, more than two-thirds of local authorities provided the subsidised food delivery service for over-60s unable to shop or cook.

‘Losing Meals on Wheels means many older people have lost a lifeline,’ says Prof Murphy. There is also a shortage of care staff, meaning many no longer benefit from regular check-ups or shopping trips.

Traumatic life events often trigger a cycle of under-eating, say the experts. ‘Bereavement can spark a loss in appetite, especially if someone’s been used to cooking for two people,’ says Farrer.

The ageing process dampens hunger and thirst signals, so many lack the motivation to eat or drink. ‘Hard foods can be painful to eat, or get constipated because they of dehydration. This puts them off eating,’ says Farrer.

The solution lies with prevention. ‘If we catch people before they become underweight, we stop the cycle of persistent illness and infection. ‘If you spot some gradual weight loss, try to get them to eat more – but little and often.’

‘Little and often’ is a mantra for 69-year-old Gerry. At 4.30pm, he’s on his third meal of the day – a tiny corned beef sandwich. He tries to prepare minced beef for his supper at least once a week.

‘Now that I’ve got a bit of strength back, I’ve finally regained my appetite,’ he says. On the arm of his chair, buried beneath a pile of papers, I notice a shiny chocolate bar wrapper. ‘They tell you not to eat sugar,’ he says, picking up the Twix bar. ‘But a little bit does my body a world of good.’