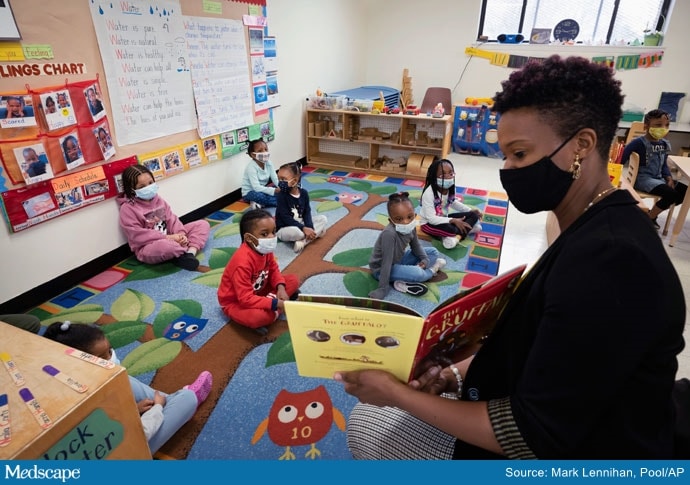 Melissa Jean reads “The Gruffalo” to her son’s pre-K class at Phyl’s Academy, in the Brooklyn borough of New York.

New York City schools will be all in person this fall with no remote options, Mayor Bill de Blasio announced Monday.

“We can’t have a full recovery without full-strength schools, everyone back, sitting in those classrooms, kids learning again,” de Blasio said on MSNBC’s “Morning Joe.”

The roughly 1 million students who attend traditional public schools will be in their classrooms with some version of the coronavirus protocols that have been in place in the current academic year, including mask wearing and COVID-19 testing, de Blasio said.

After closing schools in March 2020, New York City was one of the first large U.S. cities to reopen school buildings in the fall of that year, but the majority of parents chose online-only learning for their children.

Children and staff members who have been in physical schoolrooms have been randomly tested for COVID-19, and the city has reported very low rates of virus transmission in the schools.

The head of the union that represents city teachers said that while there is “no substitute for in-person instruction,” some students might still need a remote option.

“We still have concerns about the safety of a small number of students with extreme medical challenges,” said Michael Mulgrew, president of the United Federation of Teachers. “For that small group of students, a remote option may still be necessary.”

Asked how city education officials could overcome the fears of parents who have chosen online-only learning for their children, de Blasio, a Democrat, said that “a lot of information, a lot of communication” would be the answer.

He said parents would be invited to visit their children’s schools starting in June to get “reacclimated” to the idea of in-person school.

“Anyone who has a question or concern, come into your child’s school. See what’s going on, get the answers,” the mayor said.

The announcement comes a week after New Jersey Gov. Phil Murphy announced that the state’s public schools would open for in-person learning only in the fall.

New York Gov. Andrew Cuomo, who has clashed with de Blasio throughout the pandemic over who has the right to set COVID-19 rules in New York City schools, has not announced any statewide policy for the 2021-2022 school year.

De Blasio said city schools would be able to accommodate all students under current guidelines from the federal Centers for Disease Control and Prevention that call for 3 feet of separation, but he speculated that the standard may be relaxed before the city’s public schools open on Sept. 13.

“I think the CDC’ll be changing those rules quite a bit between now and September,” de Blasio said. “But right now in New York City, we could have every child three feet apart, we could make that work if we had to.”