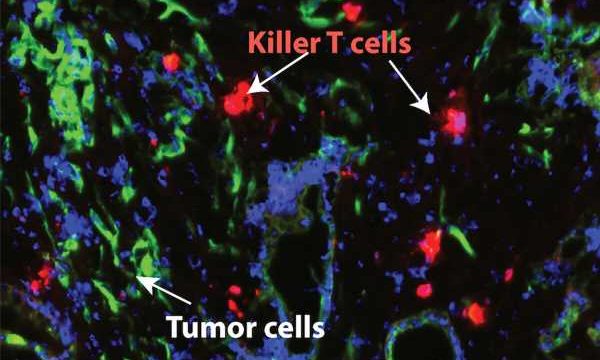 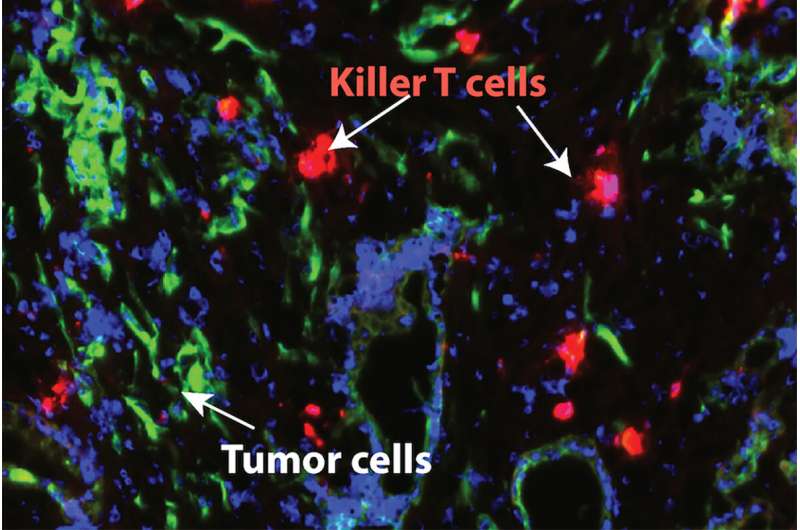 A new study—in mice—from Washington University School of Medicine in St. Louis suggests that blocking a major inflammatory pathway that is activated in pancreatic cancer makes the tumors sensitive to chemotherapy and a type of immunotherapy that prompts the immune system’s T cells to attack the cancer cells. The therapy more than doubled survival in a mouse model of pancreatic cancer.

The study’s results, published March 7 in the journal Gastroenterology, lend additional support for the rationale behind a new national clinical trial that will evaluate the same treatment strategy in patients with pancreatic ductal adenocarcinoma—the most common malignant tumor of the pancreas. The researchers plan to enroll about 50 patients nationwide.

Washington University researchers at Siteman Cancer Center at Barnes-Jewish Hospital and Washington University School of Medicine will lead the national trial that is part of the National Cancer Institute’s (NCI) Experimental Therapeutics Clinical Trials Network, a collaboration of industry, academic medical centers and researchers focused on early clinical investigations of innovative cancer therapies. The network includes more than 30 clinical sites in the U.S. and Canada.

“Washington University has a lot of strengths in bringing science from the lab to the clinic,” said senior author Kian-Huat Lim, MD, Ph.D., an associate professor of medicine and principal investigator for translational science on the national trial. “With this therapy, we are going after a pathway that we know is involved in driving the aggressiveness of pancreatic cancer. The results of this study are promising in that it showed a way to break through the defenses of this tumor type, making it susceptible to our therapeutics, including combinations of chemotherapy and newer immunotherapies that stimulate T cells to fight the cancer.”

The researchers, including first author Vikas Somani, Ph.D., a postdoctoral research associate in Lim’s lab in the Division of Oncology in the Department of Medicine, found that a protein called IRAK4 drives inflammation in pancreatic tumors and leads to T cell exhaustion, meaning the T cells can’t function as they should to attack harmful cells, including cancer. The researchers tested an IRAK4 inhibitor, called CA-4948, and found that the treatment reduced inflammatory signaling in the tumors in mice and improved the ability of T cells to infiltrate the tumors and kill pancreatic cancer cells. The therapy also sensitized the tumors to a type of immunotherapy called checkpoint immunotherapy, which “take the brakes off” T cells, improving their ability to attack tumor cells.

The researchers found that the IRAK4 inhibitor shuts down a key pathway called NF-kappaB, which has long been known for its roles in driving cancer. Much research is focused on shutting down this pathway and its downstream effects after it becomes activated. A novel element of this therapy is that the IRAK4 inhibitor prevents the harmful pathway from becoming activated in the first place.

The IRAK4 inhibitor is already in national clinical trials investigating its use against blood cancers.

“We look forward to beginning the national clinical trial of this drug in patients with pancreatic cancer—the trial is a direct translation of this particular paper,” said Haeseong Park, MD, an associate professor of medicine and principal investigator of the new trial. “We are excited to be working with the NCI and clinical sites in the Experimental Therapeutics Clinical Trials Network so that we can harness our innovative homegrown science and bring it to the national level.”