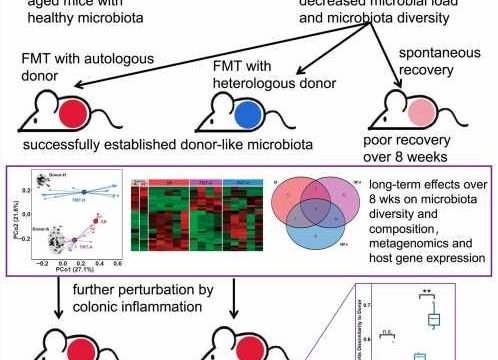 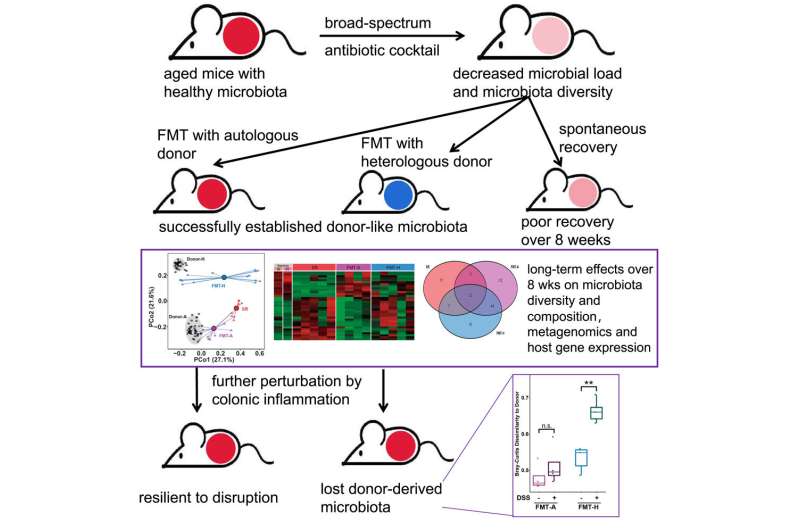 The maintenance of healthy and resilient gut microbiota is critical for the quality of life and healthspan of the elderly. Fecal microbiota transplantation (FMT) has been widely used to restore healthy gut microbiota as part of the treatment of many gastrointestinal diseases.

However, the effect of donor selection on the establishment and long-term stability of transplanted microbiota, especially in aged hosts, has been unclear.

A research group led by Prof. Dai Lei at the Shenzhen Institute of Advanced Technology (SIAT) of the Chinese Academy of Sciences has attempted to clarify this matter. The group’s recent research has found that microbiota transplanted from both autologous and heterologous donors could be established in aged hosts and facilitate microbiota restoration after perturbation by antibiotics.

However, the microbiota established by heterologous FMT is not resilient during chemical-induced colonic inflammation, in contrast to that of autologous FMT.

The study was published in iScience.

The researchers treated naturally aged mice (20 months old, considered equivalent to approximately 60-year-old humans) with an antibiotic cocktail to disrupt their gut microbiota. The mice were then divided into three groups: those receiving FMT from autologous or heterologous donors and those receiving no FMT (spontaneous recovery).

The microbiota from autologous and heterologous donors also had long-term effects (eight weeks after FMT) on the metagenomic gene pathways of the microbiota and the gene expression profiles of the host colon.

Furthermore, the researchers disrupted the transplanted microbiota three weeks after FMT by using dextran sulfate sodium (DSS) to induce a self-limiting inflammation of the gut (colitis).

They found that in the aged mice that had received autologous FMT, the transient perturbations in gut homeostasis caused by colitis did not affect the long-term stability of the transplanted microbiota. However, the gut microbiota of mice receiving heterologous FMT failed to withstand the perturbations, suggesting lower resilience.