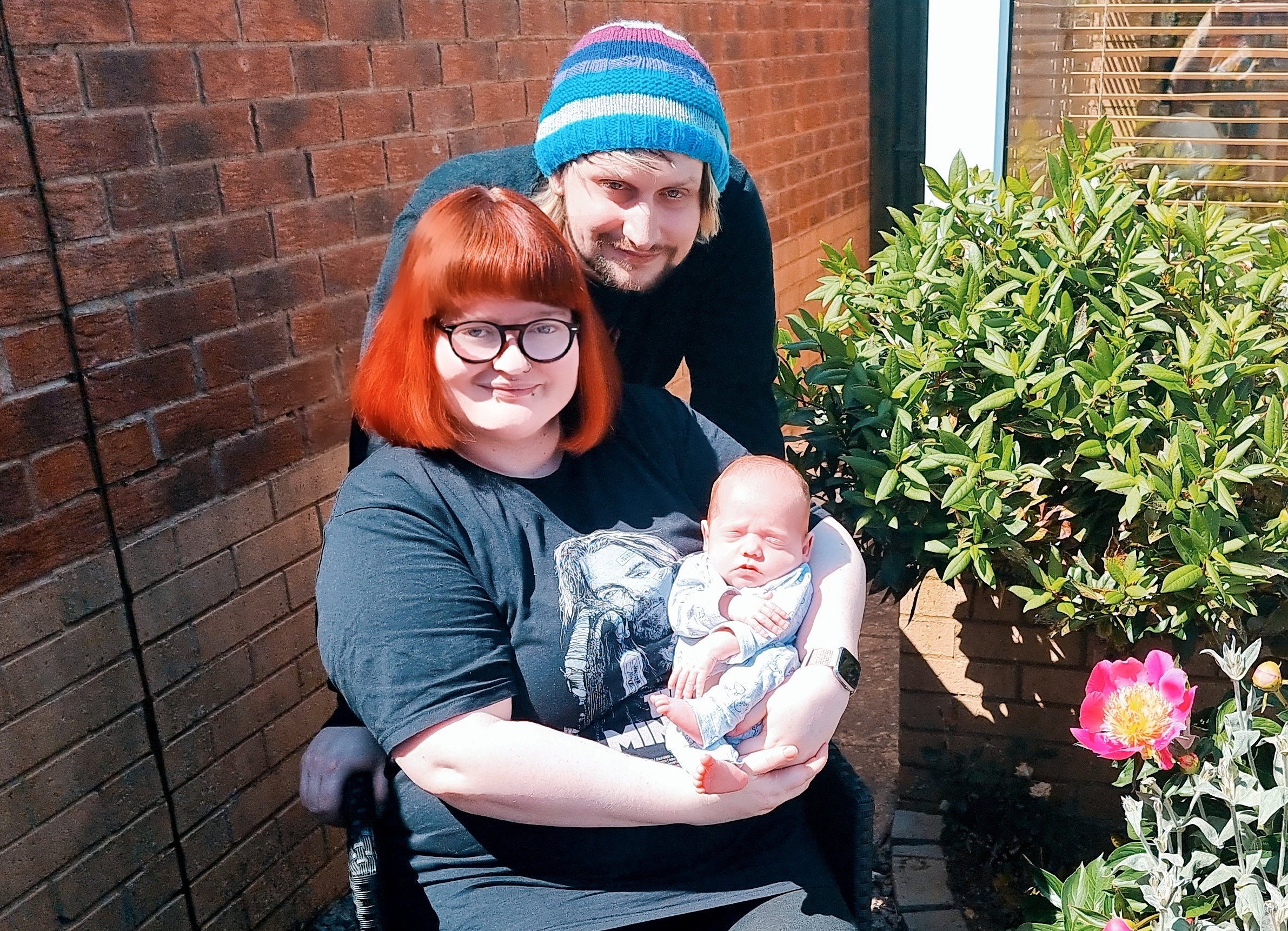 An unborn baby’s was saved from choking after his mum ate jam while in labour – sparking life-saving tests.

Robyn Banson-Noond, 31, was in hospital after her waters broke at 32 weeks, but she was preparing to go home to let her labour progress naturally.

She had a quick breakfast of sugary strawberry jam on toast – which caused a huge spike in her blood sugar levels, which worried the doctors.

Robyn was healthy – but the tests inadvertently revealed that her unborn son Alexander James Manley was being strangled by his umbilical cord and his heart rate was plunging.

Robyn from Peterborough says: ‘I was told that if they hadn’t delivered him when they did, and I’d been sent home he likely would have passed away within 24 hours.

‘It’s funny to look back and reflect on the fact that jam on toast is the catalyst for my son being delivered early, and safely.’

At 28 weeks pregnant, she was diagnosed with gestational diabetes.

Her waters broke on April 4, when she was 32 weeks and six days along.

‘I was in bed and sat up, felt a pop and then they went everywhere – the bed, floor and hallway were covered,’ she says.

‘I hadn’t even started my maternity leave.’

Her mum drove her to Peterborough City Hospital, and she sat on a puppy training pad in the car.

When she arrived she had steroid jabs to mature her son’s lungs just in case she went into early labour, but she slept through the night.

She said doctors were considering sending her home, but after her blood sugar spiked because of her sweet breakfast, they kept her in.

Doctors decided to keep her in until it went down, but it didn’t and the mum-to-be was rushed to the delivery ward so the doctors could check on the baby and manually control her insulin.

That was when they saw the baby’s heartbeat had dropped dramatically.

‘My son’s heartrate dropped from the 150s to 76bpm for over five minutes, on eight separate occasions,’ says Robyn.

‘Each time it happened the midwife would have to pull the emergency buzzer and my room would be flooded by all available midwives and doctors.’

She has an emergency caesarean as the baby was getting more and more distressed, and Alexander James Manley was born at 11:24am weighing 4lb 8oz.

‘My womb was practically “dry” because I’d lost all my waters, and that the cord had wrapped around my sons neck,’ Robyn explains.

‘They said because there was no fluid to lubricate the cord, every time he moved it just got tighter and started to cut off blood flow which is why his heart rate kept dropping.

‘It was such a rush of emotions, he was seven weeks early, and we hadn’t even built his cot yet or packed the hospital bags.’

He was taken to the NICU where paediatricians had to administer five resuscitation breaths until he gave his first cry.

‘Him being in the ICU was tough,’ says Robyn.

‘He had so many wires, monitors and tubes attached to him I had to have a nurse get him out to rest him on me.

‘I wasn’t allowed to just pick him up and cuddle him when I wanted.’

Robyn suffered with postpartum depression and PTSD as a result of the traumatic birth.

‘I still have nightmares about him dying – even though he’s happy and healthy,’ she says.

‘What could have happened still puts knots in my stomach.

‘You can’t see if a baby has the cord round their neck on an ultrasound – so there is no way they would have known that until he was born.

She wants to encourage pregnant women to trust their instincts and get checked out if they think something could be wrong.

‘I knew my water breaking early wasn’t great – but I wanted to be a good patient and not question their medical decisions,’ she adds.

‘I’m so lucky that what happened to me meant my son was kept safe and I wasn’t discharged home.’