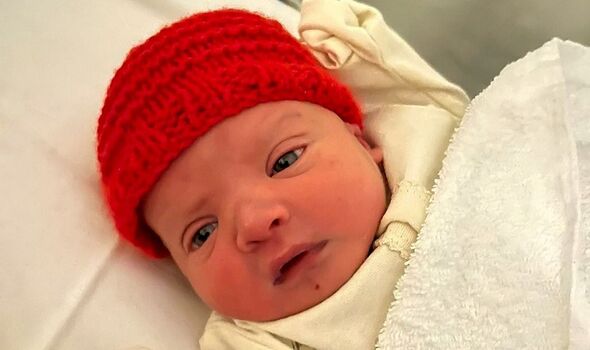 A mum who asked doctors to investigate why her baby looked “nothing like her” was given an unexpected diagnosis.

After giving birth, Hannah Doyle noticed that her baby son Zander did not resemble either parent and had swollen eyes.

The 36-year-old’s “mother’s instinct” told her something was wrong and asked doctors to carry out some tests.

Zander was diagnosed with Chromosome Deletion Syndrome, a rare condition that means he has a loss of chromosomes.

It is currently unknown how it will affect him in the future, and Hannah has not been able to find anyone else who has the same loss of chromosomes that her son has.

Speaking about the moments after his birth, she said: “When I held him to do skin-to-skin contact, he was just different to my other babies and I instantly knew there was something different.

“When I looked at his eyes, they were very swollen and did look a bit almond like.

“I do believe to this day that it was him telling me, because his eyes look totally different now.

“Now he does look very much like his dad but when he was first born he looked very different.”

Hannah first became concerned about her unborn child at 26 weeks pregnant when she found out he had two holes in his heart.

But when Zander was born at Leeds Teaching Hospital in October this year, she immediately realised something else was wrong.

As she was not given much information about the condition, Hannah said she was “very shocked” when she found out Zander’s diagnosis.

Hannah, who is separated from Zander’s father, said: “I was very shocked because I think I had always known that it was a possibility.

“My gut instinct was different from when he was born, and I’m so grateful for that gut instinct and I believe he was telling me and I was aware of it.

“It was a shock, and it felt really daunting and really scary because your mind goes into overload and you just start thinking the worst.

“It was harder because there wasn’t really much explanation to it.

“The cardiologist was the one that told me the initial diagnosis, but he couldn’t comment on it or anything.”

Hannah has said that despite his condition, Zander, now 10 weeks old, is a “happy little baby.”

But she now feels it is a “waiting game” to find out how he will be affected in the future.

Hannah, a civil servant from Halifax, said: “That’s the hardest thing because with any other medical condition, there’s more answers.

“Particularly when I can’t find anyone else with the same particular deletion that he’s got missing so there’s not even anyone else to compare him to.

“It could have no impact on him whatsoever or it could, but the not knowing is hard because you read things and wonder if it will impact him.”

The single mum-of-four is trying to spread awareness of Zander’s condition, and has started posting videos on TikTok about Chromosome Deletion Syndrome.

Hannah added: “Sometimes I must admit that I think it would have been better to have not known this.

“But I know it’s better to know so I can understand him if there is any difficulties so I want to spread awareness so lots of other children are just better understood.

“I think children are so easily labelled and judged for certain behaviours when actually they could be so many more reasons behind that.”