‘Hello, I’ve had him. He’s breathing but struggling’: Mother releases recording of her giving birth while on the PHONE to a 999 call handler

A recording has been released of the moment a mother gives birth at home while on the phone to a 999 call handler.

Lucy Knight, 29, of Ilminster, Somerset, was shocked when she could feel Eli’s head while going to the toilet, three months before her due date.

She and her partner, Dean Glover, 27, with the help of the 999 call handler, Lydia Gardiner, successfully delivered the ‘miracle baby’ within minutes.

Ms Knight can be heard saying, ‘Hello, I’ve had him. He’s breathing but struggling’, after her nerve-wrecking delivery.

Eli, barely bigger than the size of his mother’s palm, was rushed to hospital where he stayed in intensive care for 76 days. 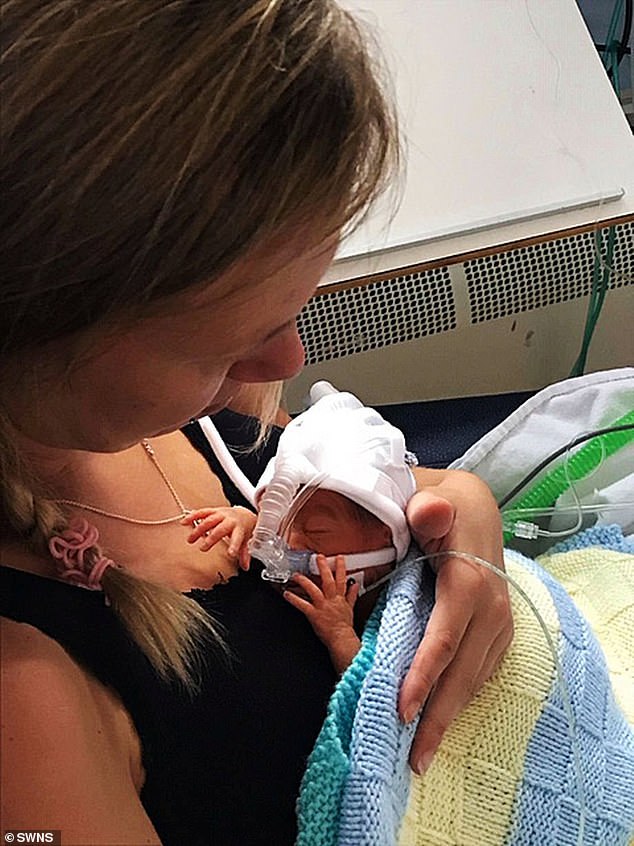 Lucy Knight, 29, of Ilminster, Somerset, delivered her baby, Eli, three months premature with her partner, Dean Glover, 27, on her bathroom floor on July 12, 2018 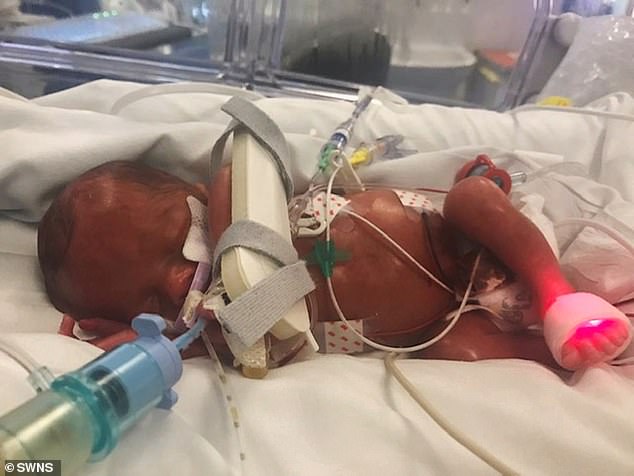 Eli was barely bigger than the size of his mother’s palm, and was in intensive care for 76 days where he suffered two bleeds on the brain and a partially collapsed lung

In the call on July 12, 2018, Ms Knight tells South Western Ambulance Service call handler Ms Gardiner: ‘I went to the toilet and I was pushing and it felt like something was coming out.

‘I can feel something, it looks like the top of the head.

‘Hello I’ve had him. He’s breathing; he’s struggling though’, before the baby cries.

Ms Knight said she couldn’t bring herself to look at Eli when he was born in fear that wouldn’t be breathing due to the sudden and unexpected nature of his arrival.

She said: ‘When Eli was born, I didn’t want to look because I didn’t think he would be alive.

WHAT WAS SAID IN THE PHONECALL?

Lucy Knight: I’m calling for myself. I’m 27 weeks pregnant and I just went to the toilet and I was pushing and it felt like something was coming out.

Gardiner: So you’re 27 weeks pregnant and you felt like something was coming out? Can you feel or touch any part of the baby now?

Knight: I thought I could feel something, yeah. It looks like the top of the head.

Knight: I’ve had him!

Gardiner: Is the baby breathing?

Gardiner: Is he still breathing? Is he doing okay?

Gardiner: Okay well done you’ve done a really good job there. Gently wipe off the baby’s mouth and nose. Dry the baby off with a clean towel. Cover the baby’s head but not its face, okay?

Knight: Okay. The ambulance is here.

Gardiner: Let me know when they’re with you in the room… You’ve done a really good job Lucy, congratulations. I’ll leave you with the crew.

‘But he was breathing and crying which was a huge relief.

‘I remember noticing how tiny he was.’

Around eight per cent of births in the UK are premature, and 10 per cent in the US.

Of the births that were premature in the UK, five per cent are ‘extremely preterm’, which is born before 28 weeks.

Most often it is unknown why a baby is born early, and it is unclear why Ms Knight went into labour so early.

Ms Knight said: ‘I was in such a state of shock that I couldn’t really feel anything. I was like an empty shell with no emotion.

‘We’re so grateful to the call handler for keeping me calm, and for helping us to keep Eli stable and safe until the paramedics arrived.’

Ms Gardiner can be heard telling Ms Knight: ‘Gently wipe off the baby’s mouth and nose… cover the baby’s head but not its face, okay?’.

Ms Gardiner said: ‘It’s always a privilege to help deliver a baby over the phone, and this call is one I won’t forget.

‘I knew Lucy needed help when she said she was only 27 weeks pregnant but was pushing and felt like she could see the baby’s head.

‘My priority was to make sure he was breathing and was kept warm.

‘Even though the baby was struggling to breathe, the paramedics soon arrived and I handed over to them. So I had no idea if Eli was going to survive.’

Paramedics drove Eli to the neonatal intensive care unit at Musgrove Park Hospital in Taunton, Somerset. They had the heating on despite it being a hot summer’s day.

‘So when we’re travelling to the hospital in this situation, we always turn the vehicle’s heating on, as well as wrapping a newborn in a baby blanket.’

Eli suffered two bleeds on the brain and a partially collapsed lung while in intensive care. 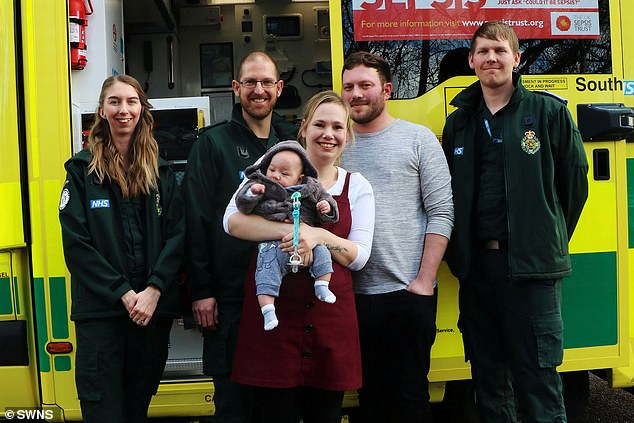 Ms Knight and Mr Glover have thanked Lydia Gardiner, the 999 call handler, and the paramedic team who rushed the baby to hospital on the day of Eli’s birth

Eli was allowed home at the end of September – two weeks before he was due.

Ms Gardiner said: ‘I was delighted to hear Eli is doing so well, and it’s such a privilege to meet him and his family.

‘We don’t always know the outcome of calls we take, let alone have the opportunity to meet patients.

‘Lucy did exceptionally well and kept really calm in what must have been such a scary situation. I feel proud to have been able to help her when she was most in need.’

Eli is now a healthy seven-month-old living at home, where he had been delivered on the bathroom floor.

Ms Knight said: ‘The crew were absolutely amazing. We cannot thank them enough for getting me and Eli to the hospital safely.

‘The outcome could have been very different. But so many people played a part in saving my baby’s life, and we are forever grateful to them all.

‘Eli is a little miracle – we’re so delighted he’s alive and at home with us.’

WHAT IS A PREMATURE BIRTH, AND WHAT ARE THE RISKS TO BABIES?

Around 10 per cent of all pregnancies worldwide result in premature labour – defined as a delivery before 37 weeks.

When this happens, not all of the baby’s organs, including the heart and lungs, will have developed. They can also be underweight and smaller.

Tommy’s, a charity in the UK, says this can mean preemies ‘are not ready for life outside the womb’.

Premature birth is the largest cause of neonatal mortality in the US and the UK, according to figures.

Babies born early account for around 1,500 deaths each year in the UK. In the US, premature birth and its complications account for 17 per cent of infant deaths.

Babies born prematurely are often whisked away to neonatal intensive care units, where they are looked after around-the-clock.

What are the chances of survival?

Underperforming hospitals 'being dragged in for Cobra-style meetings'