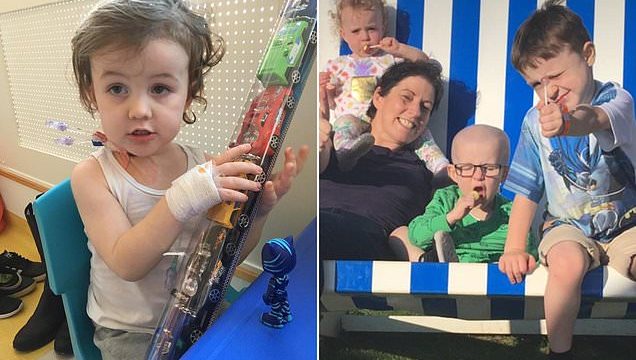 Mother claims she knew that her son, three, had a brain tumour MONTHS before the cancerous mass was spotted by doctors 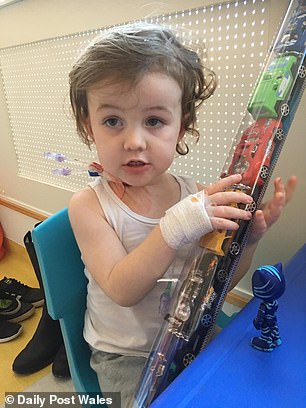 Catherine Kelly realised her son Edward was poorly last summer, after he started bumping into furniture and door frames

A mother claims that she knew her three-year-old son had a brain tumour months before he was eventually diagnosed.

Catherine Kelly realised her son Edward was poorly last summer, after he started bumping into furniture and door frames.

Mrs Kelly and husband Shaun suspected something was wrong when they noticed his younger sister Edith was developing quicker.

Paediatricians dismissed her fears of it being a brain tumour, claiming that Edward had no neurological symptoms of a brain tumour.

Mrs Kelly, from Holywell in Flintshire, persisted in chasing a diagnosis, prompting doctors to book him in for a non-urgent MRI scan in November.

Edward was sent to see an ophthalmologist in the meantime, who spotted swelling behind his eyes which led to the MRI being brought forward.

Doctors discovered he had a medulloblastoma after the scan, and he was rushed to Alder Hey Children’s Hospital in Liverpool.

Surgeons removed 98 per cent of Edward’s brain tumour – which was cancerous –  during a 12-hour operation the next day. 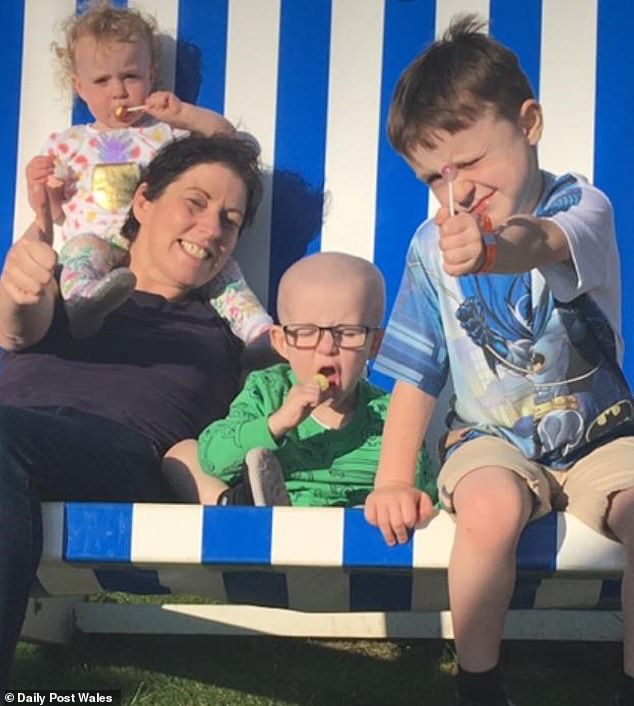 Mrs Kelly and husband Shaun suspected something was wrong when they noticed his younger sister Edith was developing quicker (Edward and Mrs Kelly are pictured with two of Edward’s siblings, Edith and Dylan)

Recalling Edward’s initial symptoms, Mrs Kelly said his balance became poor and he started shuffling down stairs on his backside.

The mother-of-five told The Daily Post: ‘I said I wanted to get a credit card and pay privately to get him tested.

‘His walking was bad but the pediatrician said he had no neurological symptoms of a tumour.’

Mrs Kelly added: ‘People should trust their instincts because Edward didn’t have the classic signs and symptoms.’

She admitted she was terrified when doctors said Edward had a medulloblastoma, which strikes

Mrs Kelly said: ‘Shaun had to come home because the other children were in after school club. I literally had to go in the ambulance with what we had with us.

‘I broke down in tears in the car park for a second, then got my head into gear and arranged childcare for the next day.’ 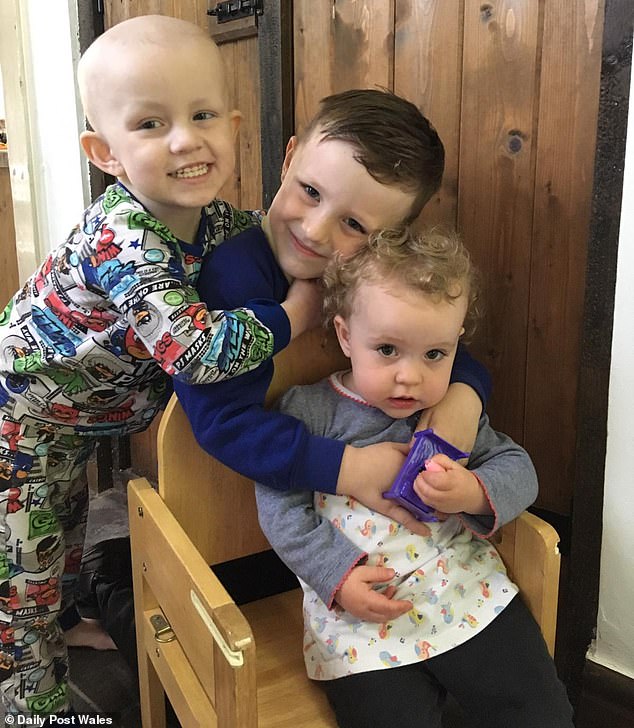 Mrs Kelly, from Holywell in Flintshire, persisted in chasing a diagnosis, prompting doctors to book him in for a non-urgent MRI scan in November (Edward is pictured with Dylan and Edith) 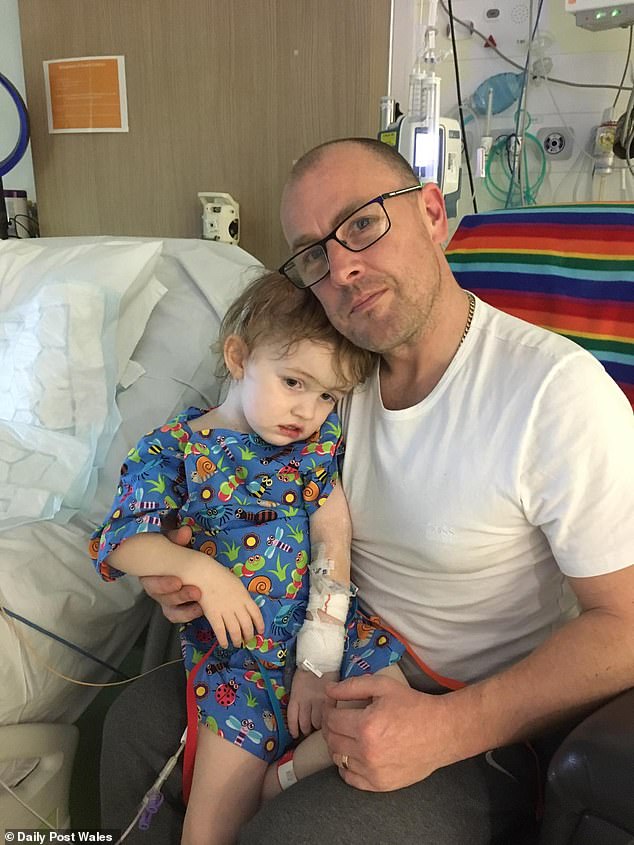 Recalling Edward’s initial symptoms, Mrs Kelly said his balance became poor and he started shuffling down stairs on his backside (Mr Kelly is pictured with Edward)

WHAT IS A BRAIN TUMOUR?

A brain tumour is a growth of cells that multiples in an abnormal, uncontrollable way.

They are more common in adults, but children are occasionally affected.

More than 9,000 people are diagnosed with brain tumours each year in the UK.

Tumours can be cancerous or not, with cancerous tumours generally growing faster and spreading.

Their cause is unknown, however, previous cancer sufferers and those exposed to radiation are more at risk.

Treatment varies but can include steroids, surgery, radiotherapy and chemotherapy.

What are the warning signs?

She revealed that when she asked the surgeon if her boy was coming back he said ‘yes’, reassuring her that Edward would pull through.

Doctors revealed it was an aggressive, high-grade growth and the remainder needed intensive chemotherapy to defeat it.

Edward suffered a seizure and needed a shunt fitted in his head to drain away fluid that had built-up because of the location of the tumour.

However, the procedure failed within 24 hours and needed to be repaired. He also caught an infection after that.

Mr Kelly, a 45-year-old telecoms engineer, claimed that Edward went blind for 36 hours, which doctors blamed on the trauma of surgery.

He then reportedly contracted sepsis and at one stage doctors claimed they had used all the antibiotics that were available to them.

Mrs Kelly added: ‘It was horrific… That for me was when I genuinely thought he may not recover. I can’t believe how frightening it was.’

The couple took turns to tend to Edith, who is now almost two years old, and their five-year-old son Dylan or keep a vigil with Edward.

He endured six rounds of gruelling chemotherapy, which saw him in hospital for six days at a time over seven months, as well as 33 blood transfusions.

In May, Edwards had injections of his own stem cells – harvested before chemo – to replenish his own disease-fighting blood cells. 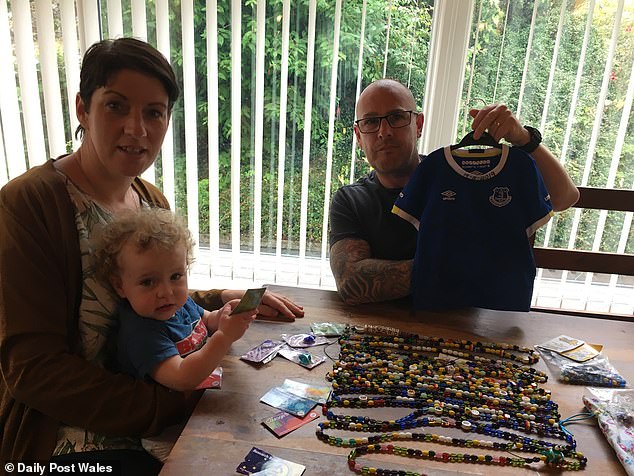 Mrs Kelly said: ‘It was like a blood transfusion – over in 20 minutes. He had it twice and they called it “liquid gold”.’

Edward’s white blood cell count increased, meaning his body was stronger and was better able at fighting off infections.

Edward was home by the end of May and rang the cancer free bell at Alder Hey on August 19.

He returned to nursery last week – but faces regular scans for the next five years to ensure the brain tumour hasn’t returned.

‘It’s luck, pure and simple,’ Mrs Kelly said. ‘Cancer doesn’t discriminate. We got to bring Edward home and that’s denied to so many families.’