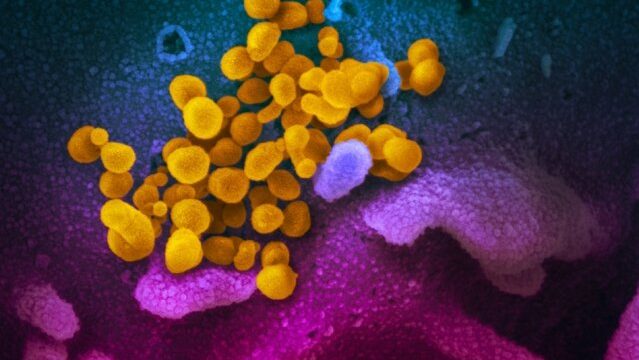 The P.1 lineage of the SARS-CoV-2 variant first observed in Brazil has driven a second wave of infections even in a region hit hard by the first wave.

The findings, which may point to risk of re-infection or increased transmissibility, come from researchers at the University of São Paulo in collaboration with Imperial College London and the University of Oxford.

P.1 lineage around the world

Despite very high infection rates in the Amazon region, a second wave of infection hit in Manaus, Brazil between December 2020 and January 2021. Genomic sequencing of clinical samples from Manaus found that this second wave was associated with the emergence and rapid spread of a new Variant of Concern (VOC), the P.1 lineage.

Statistical analysis of genome data suggests that the P.1 lineage has likely been circulating in Manaus since early November 2020.

This lineage has been identified in over 20 countries worldwide and continues to spread, including several recently confirmed cases in the UK.

Several genetic changes—substitutions and deletions—in this new P.1 lineage may have immunological significance. The team identified 17 mutations for this VOC, including a trio in the spike protein (K417T, E484K and N501Y) associated with increased binding to the human ACE2 receptor: a protein on the cell surface functioning as an entrance into the cell for SARS-CoV-2. Using analysis of genome sequence data, researchers were able to date back the emergence of the P.1 VOC to early November 2020.

The researchers found that the new P.1 lineage is growing rapidly in Brazil, is likely more transmissible than other variants, and may have the ability to evade protective immunity. The researchers estimate that the P.1 VOC is between 1.4–2.2 times more transmissible than non-VOC lineages. In addition, they estimate that the P.1 VOC evades 25-61% of protective immunity arising from infection with previously circulating variants. The exact trade-off between increased transmissibility and evading immunity is not currently known.

The team concludes that enhanced global genomic surveillance of variants of concern, which may exhibit increased transmissibility and/or immune evasion, is critical to accelerate pandemic responsiveness.

Dr. Nuno Faria of Imperial College London, said: “Our study describes a novel lineage of concern, named P.1 lineage, that emerged in Manaus, the largest urban metropolis in the Amazon, where high rates of population immunity had been observed. P.1 accrued 17 mutations, including 3 virologically-important mutations in a region of the spike protein that interacts with the receptor the virus uses to enter human cells.”

Dr. Thomas Mellan of Imperial College London, said: “We found that the P.1 variant has notable differences compared to the previously circulating strains in Manaus. We estimate a 1.4 to 2.2 times increase in transmissibility, and an ability to evade between 25 and 61% of natural immunity generated from infection with earlier strains. There was also evidence of an increase in mortality risk but whether this is due to P.1 or the extensive healthcare collapse Manaus has experienced remains uncertain.”

Prof Ester Sabino of Universidade de São Paulo, said: “Global collaborative efforts on rapid virus genome sequencing are allowing us to identify SARS-CoV-2 lineages of concerns in near real-time. Yet, uncertainty in the ways SARS-CoV-2 is changing and implications for vaccine design calls for much more sequencing and analysis of virus genomes globally.”

Q&A with the study authors:

What is unique about the P.1 lineage?

The P.1 lineage has an unusually large number of mutations in comparison with previously circulating variants, including three mutations of interest located in a region of the spike protein that interacts with the receptor the virus uses to enter human cells.

For how long has the P.1 lineage circulated undetected?

The first confirmed infection was on 6 Dec 2020. However, based on statistical analysis of genome data, the researchers estimate that the P.1 lineage has likely been circulating in Manaus since early November 2020.

Is the P.1 lineage more transmissible compared to others?

Based on what is known so far, the researchers estimate the P.1 lineage is 1.4 to 2.2 times more transmissible. This might change over time.

Is the P.1 lineage better at escaping immunity compared to other lineages?

Partial immune escape is likely. It is not possible to provide an exact figure but it is estimated that P.1 evades between 25 and 61% of immunity conferred from prior infection with previously circulating strains. What this means is that 100 people previously infected with non-P.1 SARS-CoV-2 lineages that circulated in Manaus, between 25 to 61 of them could be re-infected if they are exposed to P.1 in Manaus.

Is the P.1 lineage more deadly compared to other lineages?

The study found P.1 is associated with a 1.1-1.8 times increase in risk of mortality compared to previously circulating variants in Manaus. However, the health system in Manaus collapsed during this second wave and so it is unclear whether the increased risk of mortality is due to P.1 or the strain on the health system imposed by the large second wave. Uncertainty surrounding this effect and how it generalises outside the context of Manaus is therefore considerable.

Will vaccines still protect us from infection with the P.1 lineage? Vaccines can protect from infection and protect from disease or death. This study shows evidence that the virus may cause more severe disease. However, this study only considered acquired immunity and did not study vaccine effectiveness. There is no evidence that the current vaccines are less effective against the P.1 lineage.

How quickly does the virus change?