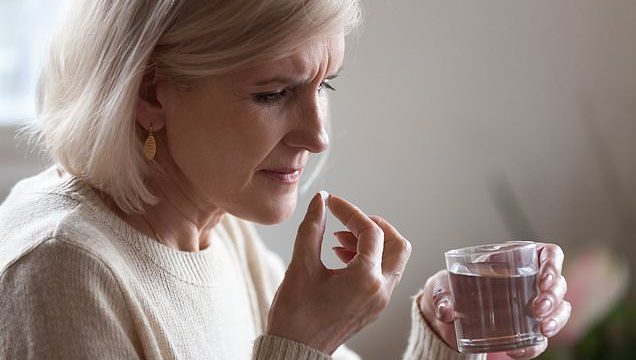 Millions of people should STOP taking aspirin for heart health because it does more them harm than good, researchers warn

Millions of older adults are taking aspirin every day despite warnings the pills may do more harm than good, research suggests.

A daily low-dose aspirin is recommended for US adults who have already had a heart attack or stroke and for those with heart disease.

But for the otherwise healthy, the advice to take the blood-thinner every day was overturned by health officials earlier this year.

However, a study has found 29million people aged 40 or over took an aspirin each day in 2017 – the most recently available data.

Researchers warned the findings show a ‘tremendous need’ for doctors to ask their patients about ongoing aspirin use. 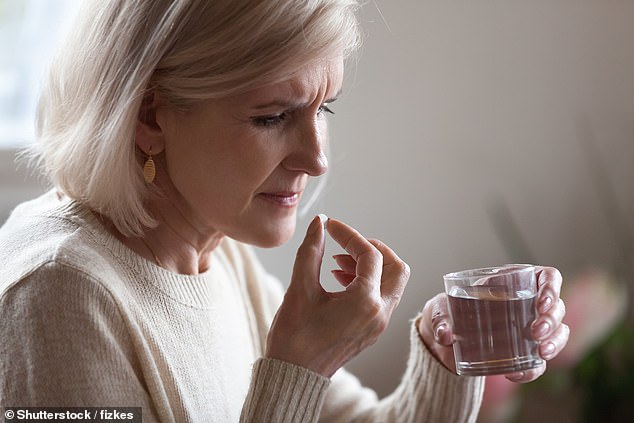 This asked 14,328 adults aged 40 or over if their doctor ever recommended a daily low-dose of aspirin to prevent or control heart disease.

Since the survey was ‘nationally representative of the rest of the US’, the researchers extrapolated the findings nationwide.

Results revealed a quarter of adults in the US aged 40 or over without cardiovascular disease (29million people) took aspirin every day to ward off heart conditions.

Of these, 6.6million did so without being recommended to by their doctor, found the study published in the Annals of Internal Medicine.

Nearly half of US residents aged 70 or over, without a history of heart disease or stroke (10million), took aspirin every day to prevent the cardiovascular conditions.

‘What we were somewhat surprised at is the high numbers of older adults that were taking aspirin who don’t actually have existing heart disease or stroke,’ study co-author Dr Christina Wee told CNN.

‘And that’s because it’s been known that the older that you are, the higher the risk of bleeding from aspirin.’

And having peptic ulcer disease did not make people less likely to take the painkiller, the results also showed.

Peptic ulcer disease occurs when painful sores form on the lining of the stomach or the start of the small intestine.

These patients are advised not to take aspirin due to it increasing the risk of their ulcers bleeding.

‘Our findings show a tremendous need for healthcare practitioners to ask their patients about ongoing aspirin use,’ lead author Dr Colin O’Brien said.

‘And to advise them about the importance of balancing the benefits and harms, especially among older adults and those with prior peptic ulcer disease.’

Study co-author Dr Stephen Juraschek added: ‘These findings are applicable to adults who do not have a history of cardiovascular disease or stroke.

‘If you are currently taking aspirin, discuss it with your doctor to see if it is still needed for you.’

However, the survey relied on participants self reporting their aspirin use and did not include those under 40.

THE UPDATED ASPIRIN GUIDELINES IN THE US

The American Heart Association and American College of Cardiology updated their guidelines on aspirin use in March 2019.

Dr Sharon Reimold, a cardiologist at the University of Texas Southwestern Medical Center in Dallas, added ‘there is no way of knowing whether these patients should be on aspirin’.

She also warned changes to medical guidelines are often ‘slow to catch on’.

Three major studies last year – some of the largest ever conducted on aspirin – found older adults gained only a small benefit from taking it every day.

This prompted the American Heart Association (AHA) and American College of Cardiology (ACC) to overturn their guidelines in March.

The bodies now only recommend lose-dose aspirin to patients with cardiovascular disease and no increased risk of bleeding.

Dr Wee said: ‘Prior AHA and ACC guidelines recommended [against] aspirin only in persons without elevated bleeding risk.

‘The 2019 guidelines now explicitly recommend against aspirin use among those over the age of 70 who do not have existing heart disease or stroke.

‘Our findings suggest a substantial portion of adults may be taking aspirin without their physician’s advice and potentially without their knowledge.’

Most heart attacks and strokes occur when the blood supply to the heart or brain is blocked.

This usually starts with atherosclerosis, which describes plaque building up in the arteries.

Large plaques can reduce blood flow to the major organs. However, most of the damage occurs when a plaque ruptures.

This causes blood clots to form, which can further block blood flow or travel to other parts of the body, which is known as an embolism.

If the clot blocks a vessels that feeds the heart, it causes a heart attack. If it blocks blood supply to the brain, it leads to a stroke.

Aspirin thins the blood, which makes it less likely to ‘stick’ and form clots.

The NHS states low-dose aspirin may prevent heart attacks and strokes in at-risk people, however, patients should follow the advice of their doctor.